Law Tactical is updating their folding stock adapter for AR-pattern rifles. The new adapter is smaller, accommodates a wider range of firearms, and adds several other features as well. Currently they are accepting pre-orders for their Gen 2 Stock Adapter, expecting to ship at the end of this month.

This small mod allows you to stow or transport your AR or M4 rifle in a compact package without separating the receivers by folding away the stock and buffer assembly.

If you’re thinking, “How do you shoot without a buffer assembly,” well, you don’t. It won’t cycle and it’s contraindicated by Law Tactical. There’s a small latch to keep the bolt from flying back at you, but it’s mostly to hold it in the upper receiver while the stock is folded. While there are a few rifles that have recoil assemblies integrated in the upper, like the Para USA TTR, Rock River Arms LAR-PDS and the new Faxon ARAK, this adapter effectively disables any rifle that requires the buffer assembly, whether it uses direct impingement or a piston system.

It’s not a thoroughly-ridiculous idea. This adapter is to make your rifle use up less space lengthwise, and it was designed for soldiers and transport crews who need to cram in tight spaces and anyone else who needs to fold up a rifle but doesn’t have the luxury of taking it apart.

We can also see this being adopted by law enforcement in general. With a Law Tactical stock adapter, an officer needing to keep a low profile could walk around with a rifle in a backpack and leave none the wiser and be able to flick it open and make it ready to go in a split second, and it makes keeping a rifle up front in a squad car that much easier. And it makes it possible for motorcycle cops to keep one in a pannier at all; try that with a standard AR carbine.

The adapter automatically locks into place when you extend the stock and no other manipulation is necessary to ready the rifle, besides disengaging the safety that is, and the bolt carrier extension helps to keep debris from contaminating the action through the open buffer. 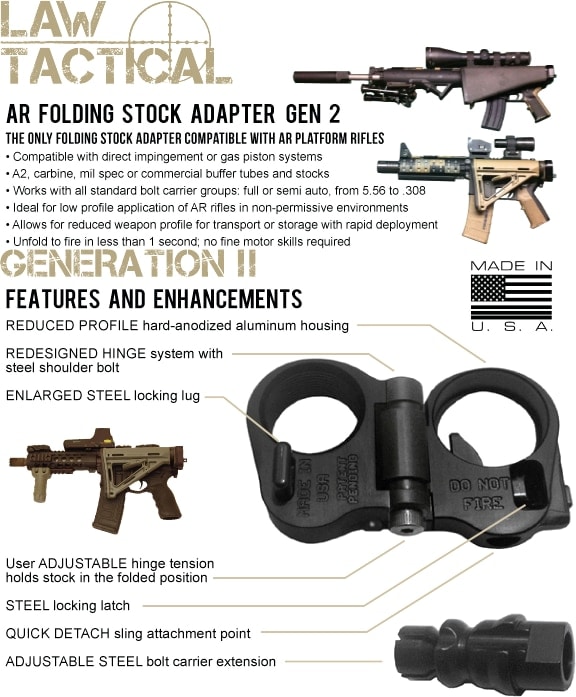 Another plus is that the adapter works on just about any type of AR rifle, including mil-spec and commercial rifles, with rifle or carbine buffer systems, chambered in any caliber up to .308 Winchester.

The Gen 2 adapter is made to the same specifications as a mil-spec receiver, and is made with hard-anodized aluminum and uses improved, enlarged steel locking tabs. The hinge is adjustable and you can increase or decrease the tension, and how much force it takes to open and close the stock. The new bolt carrier extension is adjustable and as a final touch, the adapter is fitted with an ambidextrous quick-detach sling point.

Yes, we understand that this is a strange design, and it’s unconventional and in the right light, pretty dumb. But as a whole, the idea has grown on us. It’s a more elegant solution than a take-down rifle, and it’s much easier to deploy. Yes, with other rifle designs you don’t lose much functionality by folding the stock, but there are other reasons to select an AR-pattern rifle over those. And this lets you fold them up. If you know what you’re doing and you pay attention, you will never have any problems with this folding stock adapter.

It’s a bit on the expensive side, but for those who need something like this, it’s a clear win. For everyone who prefers the long-stroke piston systems, you may now resume pointing and laughing.