Travis Haley and Haley Strategic have put together some thoughts about what they’ve learned shooting ARs chambered in 300 AAC Blackout over the course of this past year. In the end they make a solid case for the cartridge, but they seem to be leaving out some crucial information.

A new cartridge, 300 AAC Blackout or simply 300 BLK (and not 300 B.O. like in the video) was set in stone and given offical SAAMI specs just last year, but interest in it has spurred a lot of development for it in the shooting world. The cartridge uses a 5.56 NATO case that’s shortened and necked out to accept 7.62mm bullets and still fit in AR-15/M16/M4/STANAG magazines.

It is also designed to run out of shortened barrels, even shorter than the 14.5-inch M4 barrel. 300 BLK will close in on peak velocities with just 10- to 12-inch barrels, and will often reach 90 percent of maximum velocity with even shorter barrels. This makes it a great cartridge for short-barreled rifles and compact suppressed rifles.

So it’s clearly good for close-quarters engagements, and suppresses well, even when using supersonic loads. Haley shows us just how well it does at longer ranges.

After all that, who wouldn’t argue for a complete shift from 5.56 to 300 BLK? More power at all ranges, just with a less flat-shooting cartridge. And it smokes 5.56 NATO and 7.62x39mm alike, right?

Out of an SBR, yes, but out of full-size carbines and rifles, we’re a bit skeptical. In the video Haley says that 300 AAC Blackout is 17 percent more powerful than 7.62x39mm at the muzzle, which can only be possible if the barrel is cut down. Out of a service rifle, like an AK, 7.62x39mm is not marginally more energetic than 300 BLK. Depending on which loads you pick, 7.62x39mm can be more than 25 percent more energetic than 300 AAC Blackout. 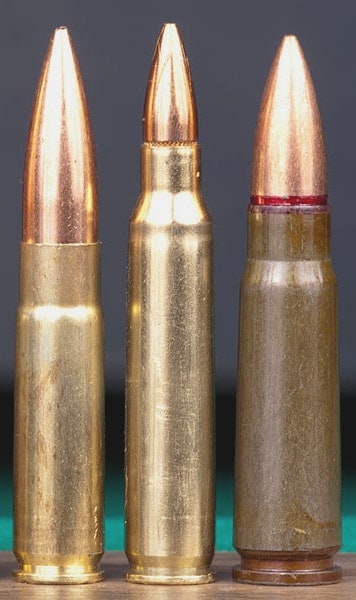 It’s simply a matter of case capacity. The 7.62x39mm cartridge can hold 36 grains of water compared to 300 BLK’s 26. The only way 300 AAC Blackout is outperforming 7.62x39mm is if it’s being shot out of a cut-down barrel, such as the one Haley is using in the video. Under that circumstance, it’s natural that 300 BLK is the better cartridge, because it was designed to do well from an SBR where 7.62x39mm, at least with recent military ammunition, has been optimized for 16-inch barrels.

In the same way most 5.56 ammunition has been optimized for longer barrels, and like a lot of small, fast cartridges it suffers dramatically if it doesn’t have enough barrel to pick up steam. Some 5.56 NATO loads, like the new M855A1 EPR, can do very well out of the M4’s 14.5-inch barrel, but we doubt it would perform anything like what you can squeeze out of 300 BLK with a 9-inch barrel.

This is not to criticize 300 AAC Blackout. There really isn’t any other cartridge like it—go back to your corner, .300 Whisper—and it really whips other cartridges when used the way the Advanced Armament Corp. intended it, which is to say, with SBRs. No pistol caliber can come close for supersonic loads, and the ease of switching between subsonic and supersonic is unparalleled. No other intermediate caliber runs so cleanly with SBRs, without dramatic muzzle flash and noise, the way 300 BLK does.

It can also match 5.56 NATO in terms of energy with a shorter barrel. With it’s ballistically efficient bullets, it will retain more energy at longer distances than many 7.62×39 loads. But going to town on a steel plate at 750 yards with a red dot sight is a testament to Haley’s skill far more than it is to the cartridge’s performance. It’s either that or Haley is running some type of 300 AAC Blackout platform that we’ve never seen before capable of demonstrating a level of performance that’s demolishing all previously set standards, even those established by AAC.

So while it can be about 17 percent more powerful than the Russian cartridge, you have to head a couple hundred yards downrange before 300 BLK begins to overtake 7.62x39mm. We have to be open to the possibility that Haley simply misspoke.

When it comes to short-barreled rifles, 300 AAC Blackout reigns supreme. It’s great up close and it holds its own with other popular and common cartridges. With the availability of subsonic ammo it’s more flexible than the vast majority of rifle cartridges, and it’s a .30 cal, which warms the heart. If you’re looking for something compact, go 300 BLK and don’t look back. But if you’re not, don’t throw out your 5.56 and 7.62 ARs and AKs just yet.