A Missouri man’s plan to carry out a mass shooting at a movie theater was foiled by police after the man’s mother notified authorities of her son’s murderous intentions.

Police say that 20-year-old Blaec Lammers of Bolivar had purchased tickets to the final installment of “The Twilight Saga: Breaking Dawn — Part 2” – the teen flick about interbreeding vampires and werewolves – for this weekend.

In addition to the tickets, Lammers also purchased 400 rounds of ammunition and two rifles.

When Lammers’ mother realized her son had bought the guns, she contacted authorities.  She told police that her son was “off his medication” and might be planning something similar to what transpired in Aurora, Colorado this past July, when a gunman opened fire at a packed theater, killing 12 and wounding 58.

When police questioned Lammers, he initially denied that the weapons were for any planned movie theater attack. He told the interviewer that they were for hunting.

When the interviewer pressed Lammers about his supposed hunting expedition, Lammers cracked, revealing that he did in fact have homicidal impulses and that he took the guns to a range on Tuesday because “he had never shot a gun before and wanted to make sure he knew how they shot and how they functioned.”

Here is an excerpt from the police probable cause statement:

Though, as the interview continued, Lammers actually said that venue had switched, that he was no longer going to shoot up the movie theater for fear of running out of ammo during the assault, but was going to hit up Walmart instead. 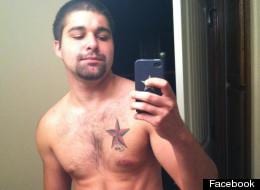 According to the probable cause report, Lammers had a run in with the law in 2009 for stalking a Walmart employee.  He later admitted to police that he wanted to stab that employee.

Lammers is in custody and being charged with “making terrorist threats, armed criminal action and attempted 1st degree assault,” according to the Springfield News-Leader.

Lammers bond is set at $500,000 and he is currently awaiting legal representation.

There are some obvious questions that still need answers: Was the Walmart and the local movie theater “gun-free” zones?  If they were, did this factor into Lammers’ decision?

How mentally ill is Lammers?  What type of medication is he on?