Ready Reserve's Ammo In a Can

Ready Reserve, a canning company, is now offering something for every pantry in America: canned ammunition. Their ammo is sealed inside an airtight, oxygen-free environment to ensure that it will stay dry until someone opens it.

Long-term ammunition storage can be a challenge, as a lot of home solutions like vacuum bags still leave some oxygen in them, which can still result with some corrosion, and don’t have the durability of a metal can. And while some surplus ammunition comes canned, it’s often old, corrosive ammo in Russian chamberings. 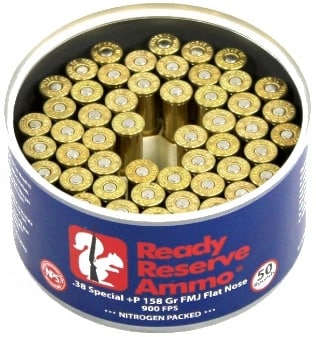 And Ready Reserve really goes out of their way to ensure that their ammo will weather time. According to the press release, “Without moisture or oxygen in the can, the ammunition does not deteriorate, corrode, or rust. This gives the ammo an indefinite shelf life, regardless of the environment outside the can. The can is enameled to insulate the rounds from electrolysis. Just use the pop-top lid to open and the plastic overcap will give the remaining rounds reasonable containment and protection from the elements. No box to fall apart and spill ammunition everywhere.”

This newly-manufactured Ready Reserve-canned ammunition is made by major ammunition maker ATK, and is not reloaded or remanufactured. Ready Reserve offers canned ammo in .22 Long Rifle, .38 Special, 9mm Parabellum, .40 S&W, 5.56x45mm, 7.62x39mm and 12-gauge 00 buckshot. This is a well-preserved alternative to Fiocchi’s Canned Heat.

With the exception of the .22 and 12-gauge ammunition, this canned ammo is largely a novelty, as all of it is ball ammo, that is to say, they all use full metal jacketed bullets, apart from the .22 and 12-gauge which are lead. Hopefully down the road Ready Reserve will can some proper hunting and self-defense ammo for the expansion-minded survivalist. 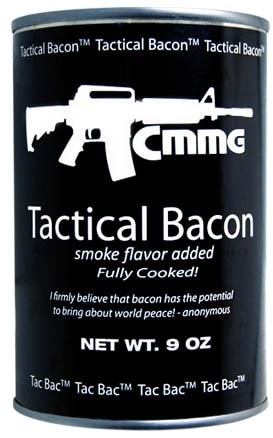 That being said, you could do worse than stock up on 12-gauge and .22 LR for your bug-out bag, and it makes perfect sense to buy a few tins of ammo that you will never, ever have to maintain.

And as a gift this can’t be beat. So whether you’re looking for something this holiday season for the shooter—or prepper—who has everything, you gotta check out Ready Reserve’s line of canned ammo. Compliments CMMG’s canned bacon very nicely, we think.