The Second Amendment Foundation is fighting back against New York City Mayor Michael Bloomberg and his pro-gun control coalition Mayors Against Illegal Guns.

In its new “Meet the Mayors” project, the SAF is releasing ads, set to appear in newspapers, magazines and on the Internet that reveal the criminal history of several (more than a dozen) of MAIG’s members.

On one pamphlet, the SAF asks the question, “So who are the real criminals? And then proceeds with a follow-up that reads, “America’s 80 million law-abiding gun owners or Mayor Bloomberg’s gang of gun-grabbing politicians?” 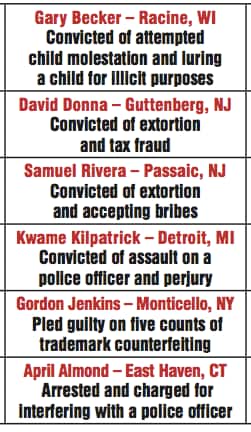 It’s essentially a smear campaign.  By showing the legal transgressions of former members of MAIG (except for Mayor Gordon Jenkins, Monticello, NY; he is still current), the SAF hopes to delegitimize MAIG and its positions in the eyes of the public.

SAF Executive Vice President Alan M. Gottlieb spoke about the impetus behind the ‘Meet the Mayors’ project in a press release.

“Michael Bloomberg created this group to further his personal agenda of public disarmament,” Gottlieb said. “But within the ranks of his organization, our research has found several politicians who have been convicted of various serious crimes, thus making it impossible for them to finish their terms.

“In short,” Gottlieb explained, “many of these elitist politicians can no longer own firearms. The crimes they were convicted of suggest they are public enemies rather than public servants. No wonder they want to take guns from law-abiding citizens!”

“Perhaps Bloomberg should worry about background checks on his colleagues, rather than law-abiding gun owners,” he recommended.

Gottlieb also pointed to research that indicates that the more than 8 million concealed carry permit holders across the country commit far fewer crimes on average than MAIG’s members.

“While Michael Bloomberg has been campaigning to turn gun owners into criminals,” Gottlieb said, “the criminals in his own ranks were engaged in such activities as tax evasion, extortion, accepting bribes, child pornography, trademark counterfeiting and perjury. One was even convicted of assaulting a police officer.

“And these people have the audacity to smear law-abiding gun owners as potential criminals, simply because they exercise their constitutional right to keep and bear arms,” Gottlieb concluded. “He should pay more attention to what his friends are up to than worry about the gun owners he’s been trying to demonize.”

I’ve never been a fan of smear campaigns (while they are effective, GOP presidential candidate Mitt Romney can testify to that, I ultimately believe they’re reductive and only serve to divert attention away from what should be a principled discussion of the real issues; in the past, I’ve discredited Bloomberg on his failed polices, such as stop-and-frisk, as opposed to targeting the company he keeps), but I have to back the SAF on this project.

Gottlieb’s correct.  Bloomberg has consistently demonized gun owners.  One quick example is his insinuation that the right to keep and bear arms, as it currently exists, is a threat to law enforcement.

“I don’t understand why the police officers across his country don’t stand up collectively and say, ‘We’re going to go on strike. We’re not going to protect you unless you, the public, through your legislature, do what’s required to keep us safe’” Bloomberg said on the Piers Morgan Show.

“After all, police officers want to go home to their families and we’re doing everything we can to make their jobs more difficult,” said Bloomberg.

Given comments like this one and the aggressive posture MAIG has taken toward gun owners, perhaps it is time to fight fire with fire.