Kel-Tec is expanding on their line of firearm accessories with their new CL-43 flashlight.

The CL-43 is not just another cheap light, Kel-Tec has designed the CL-43 to compete with the high end of portable lighting, making it more RFB than P-3AT.

The CL-43 uses the same light module as other Kel-Tec lights and pours on the brightness, operating at an impressive 420 lumens. Constructed from extruded 6061 aircraft aluminum, the CL-43 is available in three tactical and two safety colors, black, tan, olive drab, yellow and orange. The black light is hard anodized and the colors have a Cerakote finish. 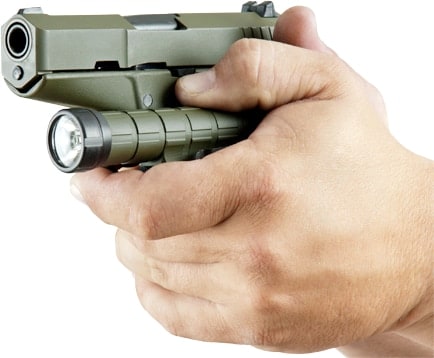 Following their other designs, the CL-43 has Kel-Tec’s trademark non-slip frag grenade texture and a forward-mounted power switch that you operate like a trigger. With it’s dual battery tubes it can be held and manipulated like a gun instead of like a straight flashlight. The power switch has three modes, off, intermediate on and constant on.

It runs on three CR123 lithium batteries but can also use AAs with an adapter, which makes it longer. The CL-43 has an integrated belt clip and lanyard loop for a wide variety of carry options, and it looks like it can be reversed for lefties.

The flashlight can be mounted to a firearm with an adapter, provided there’s enough rail. The forward-facing switch again works in its favor as it means you can actuate it without having to re-position your hand along the forearm or forend. 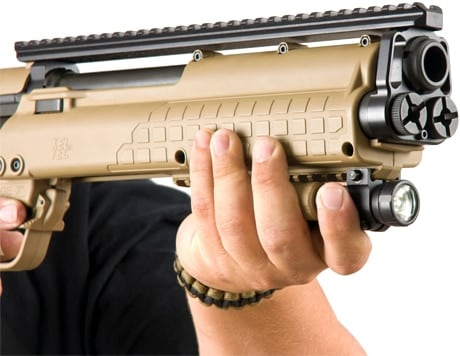 And it will run for just over 3.5 hours on a fresh set of batteries. That’s not bad for a light this bright. It has an effective range of 160 meters. It weighs only 3.8 ounces with batteries and is rated to withstand falls of up to one meter and is waterproof to one meter as well.

Kel-Tec is nothing if not innovative and the CL-43 continues in their tradition of doing things differently. If you’re a fan of their guns then put this light on your wishlist. Kel-Tec has priced these flashlights at $140 and they look right at home on their KSG. If you want something more conventional, check out their CL-42.