This March, the United Nations will resume negotiations on a treaty designed to regulate the multibillion-dollar global arms trade.

While it’s unclear at this point what the final version of the treaty will look like and how it will impact law-abiding gun owners, there is an increasing number of lawmakers who are not interested in finding out the details.

That is, they want to ensure that no matter what the U.N. decides to do the Second Amendment rights of U.S. citizens goes unmolested.

One way to defeat the ATT is to urge President Obama not to sign it, if and when it’s passed by the U.N.

Enter House Resolution 814, a bipartisan measure co-sponsored by Rep. Joe Barton (R-Texas) and supported by 75 of his colleagues which does exactly that.

Essentially, HR 814 promises to withhold any federal funds for the implementation of an ATT unless it has the consent of the Senate (an ATT would need a two-thirds ratifying vote from the Senate to be officially adopted as U.S. law) and has been reviewed by Congress.  In other words, it reminds the President that his hands are tied on this matter and that an ATT will be non-binding unless it has Congress’s full blessing.

“The right to bear arms is guaranteed by the Constitution,” said Rep. Barton in a press release. “I will oppose any measure that would infringe on the Second Amendment rights of law-abiding Americans – that includes this arms treaty.  I will continue to oppose efforts by the UN or any other person, organization, or country to fracture or supersede our Constitution.”

Here are some of the highlights in the resolution: 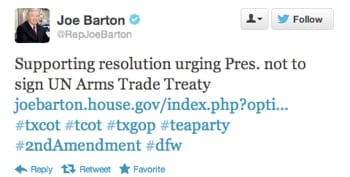 The ATT “fails to expressly recognize the fundamental, individual right to keep and to bear arms and the individual right of personal self-defense, as well as the legitimacy of hunting, sports shooting, and other lawful activities pertaining to the private ownership of firearms and related materials, and thus risks infringing on freedoms protected by the Second Amendment.”

The ATT “could hinder the United States from fulfilling its strategic, legal, and moral commitments to provide arms to allies such as (Taiwan) and the State of Israel.”

The ATT “risks imposing costly regulatory burdens on United States businesses, for example, by creating onerous reporting requirements that could damage the domestic defense manufacturing base and related firms.”

This is not the first time Congressional leaders have pushed back against the prospective ATT.  There have been bills introduced in both the House and the Senate that seek to cement the firewall between a potentially draconian global arms trade agreement and our right to keep and bear arms.

Additionally, there have been letters signed and pledges made and other efforts to mobilize opposition to the ATT, all of which have been successful.  Most notably, there are approximately 50 senators who have signed a letter drafted by Republican Sen. Jerry Moran (R-KS), which states:

It appears that despite some upsets in the November elections that the firewall remains fully intact.