A couple of weeks ago, I wrote a bit about a controversy that had been brewing on the Internet.

To sum up, someone was making the age-old argument that police officers, simply because of their training, were the only ones who should be allowed to carry guns.  One supposed proof of this conceit was the “qualifying course” that a cop has to pass in order to carry a weapon while on duty.

The argument suggested that those of us who aren’t cops, who don’t have their training, couldn’t pass such a qualifying course, and therefore shouldn’t be allowed to carry guns.

So we put it to the test.

I’ll be the first to admit that this isn’t the LAPD course.  We didn’t have access to turning targets, for one.  And we don’t have any of the other job related stresses that cops all have, especially those who serve in LA.

But the timing is accurate, and the difficulty is a reasonable equivalent.

This is a bit comic.  As I didn’t have internet access at the range, I’d made some notes about the stages and times to take with me.  I’m dyslexic, and prone to transpose numbers.  Shooters have 25 seconds to complete the first sequence of shots and reloads.  I had written down 12 seconds. 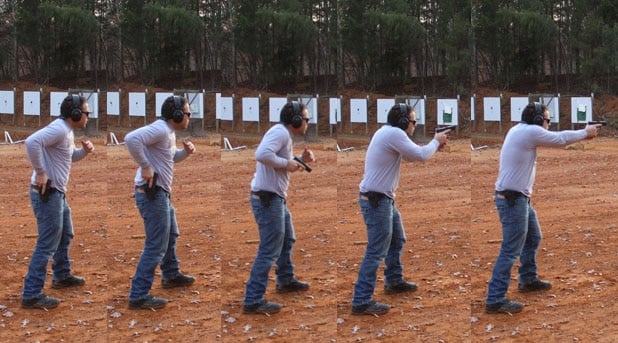 The five steps for drawing from a holster. (Photo by David Higginbotham)

You can imagine my embarrassment.  Jacob shot the first sequence in a little over 14 seconds on his first try, and it looked lightning fast.  He was shooting the Springfield Armory TRP, a very nice 1911, and Jacob can flat out shoot.  If he couldn’t do it in 12 seconds, I had no hope of passing.

He ran the first stage three times and broke the 12 second mark on that third try.  I blew through some rounds, but don’t have much practice doing reloads.  On my fifth try, I got down to 14 seconds, right where Jacob had started, and only after extensive coaching from Jacob, and Bob Lawman (the wheel gun wizard who owns the range).

But then I went back and double checked my notes.  The number 12 was a yard marker.  You have 25 seconds for this first stage.  Take your time.

This one was a bit more of an approximation, as we didn’t have turning targets.  But we hard a timer, which is close enough.  The two shot sequence is really not that difficult.  Even with the recoil of the 1911, hard double taps stayed on target. 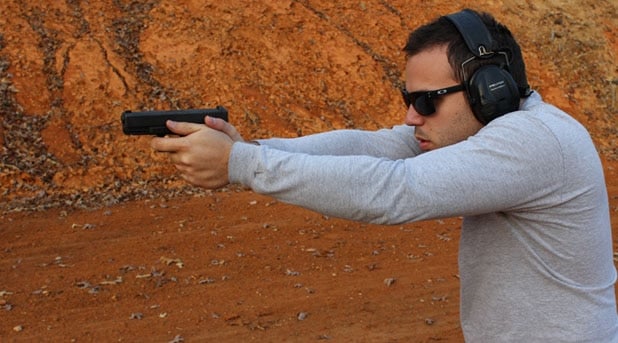 Jacob shooting during the third stage of the test. (Photo by David Higginbotham)

This one was much easier than I’d imagined it to be.  It was so easy, I started with the 1911 holstered and still finished with seconds to spare.

This is where we really could have used turning targets.  But look at how simple this is.  Nine seconds for three shots.  That’s 18 seconds for six shots.  And you start with sights aligned on the target.  Really?  This was the first moment in the whole sequence when I really thought that I’d really miscalculated.  This is too easy. 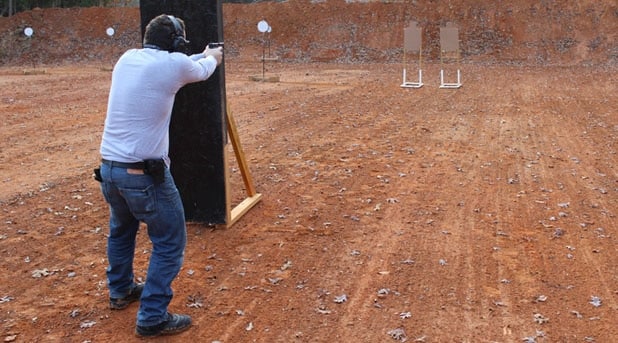 Jacob shoots behind an impenetrable wall! (Photo by David Higginbotham)

We bumped it up.  Eight seconds for all six shots, and we started form behind the barricade.

Once I had the times right, I had no difficulty at all passing the test.  I used a Springfield Armory TRP 1911.  Jacob used a Glock 17.  He flat out smoked the course.  The video of Jacob above is a modest run.  He’s a much better shooter than I am, and it shows.  But I want to be clear about this; I passed easily.

The course is so easy, in fact, that we started to add challenges for ourselves.  We’d gone to the range with 500 rounds of .45ACP, and 500 rounds of 9mm, thinking we’d have to take a couple of practice rounds first.  The only thing that tripped me up was thinking that the first round had a 12 second time limit. 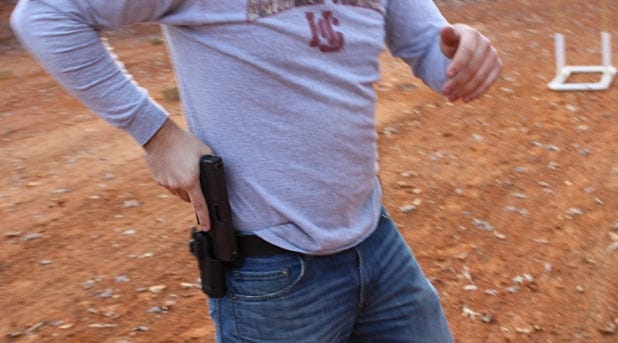 The only real challenge came from attempting the course with a five shot Ruger SP-101 with a two inch barrel.  That required two reloads of a revolver, and we didn’t have any helpful reloading devices.  I shot the first round in 28 seconds.  Jacob, who could do the reloads faster, had trouble keeping the odd shot sequence straight when it was divided by five instead of six.  We both could do it with a six shot revolver.  Not as fast, but easily possible.

So there you have it.  It isn’t exact, but close enough for me to know, without hesitation, that I could pass the LAPD course, on their turf.

But that’s not the point.  I’m not trying to say I’m as good as any cop.  But I now know one measure of my abilities, and I’m much more prepared to enter an argument.  At the end of the day, I felt much more confident about my skills.  And I had practiced, a lot.  And that’s all I really care about.  The rest is just talk.