Man Shot in Head, Wakes from Month-long Coma in Time for Thanksgiving

Ready for some good news that’s sure to bring some holiday cheer? One young man with a near-fatal bullet wound somehow managed to pull himself out of a month-long coma, just in time for Thanksgiving dinner. Talk about having a lot to be thankful for!

It all started about one month ago when 21-year-old Benjamin Pessah, his girlfriend, and two other friends were attending a Halloween party. After they left, 30-year-old Hun Saelee allegedly groped Pessah’s girlfriend and attempted to start a fight. Pessah stood up to Saelee, so Saelee went to his car and retrieved a gun. 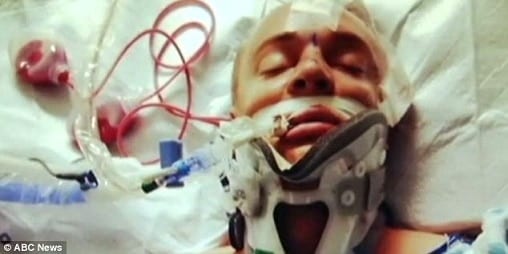 Pessah’s brother, Nick, described the scene to ABC News: “It was pretty bizarre and unnecessary. (Saelee) attempted to shoot the group of four of them. He missed everybody but the last bullet hit my brother in the head.”

Doctors feared for the worst. Nick recalled, “They weren’t going to operate because he was too severely injured. Then they said they would attempt it but normally they wouldn’t. They only did because he is young and has a chance at surviving. They weren’t sure if he was going to make it or not.” At one point they even gave just a 25 percent chance of living.

But still, they decided to press on. They operated on Pessah and kept him in a chemically induced coma for the past several weeks. But right before Thanksgiving they pulled out Pessah’s breathing tubes and brought him out of the sleep. He whispered his first words: “Hi, Mom.”

“My mom was the only one who saw him speak and it brought her to tears,” Nick said. From there, Benjamin eventually took his first steps.

Nick added, “Right now I couldn’t be more happy. It’s been an emotional rollercoaster. I’ve been crying, I’ve been happy. He’s beaten all of his odds so I couldn’t have asked for a better Thanksgiving.”

Well, that covers all of the joyful tears and sighs of relief. How are things going over in county jail? Hun Saelee was arrested and charged with four counts of attempted murder and several weapons-related charges. He has been kept under a whopping $10 million bail and was at one point under suicide watch.

Saelee’s girlfriend, 26-year-old Judy Lau, was arrested and charged with accessory to the crime after the fact. She was released under a $220,000 bail.

The two pleaded not guilty to the charges on November 5th. Despite the Benjamin Pessah’s incredible recovery, it is possible that he won’t testify against Saelee in court. Nick Pessah told reporters that his brother had no recollection of the night of the shooting. Luckily, Nick’s girlfriend and his two friends should help to paint a picture for the jury.

It seems that this is going to be one of those rare shootings with a happy ending. The victim survived and is well on his way to recovery, while the shooter has to await his day in court. It’s not surprising that people are calling this story a holiday miracle.