The ATF has given Arsenal the green light to import their double-barreled, double-everything 1911. Arsenal turned a lot of heads a few months back when they announced their truly unique handgun, the AF2011-A1, but many assumed that the gun would never wind up for sale in the U.S., because it fires two cartridges with one pull of the trigger, making it a machine gun according to federal law.

Arsenal maintained that their double trigger design, and matching pair of sears and hammers, would not raise the hackles of the gatekeepers of the guns, and they were right on the money. From their press release:

“The US Department of Justice, Bureau of Alcohol, Tobacco, Firearms and Explosives (BATFE) has officially granted import permission and sale in the United States of America of the AF2011-A1 Second Century double barrel pistol, with a total score of 120 Points, according to Form 4590.

“Arsenal Firearms Group proudly announces the official distribution to America of the whole line of double barrel firearms and dedicated accessories starting on January the 1st 2013, through the appointed US Importer of Record, Apex International LLC of Middletown, CT and according to a ‘Direct Dealer Distribution.’

“The Company wishes to take this opportunity to thank warmly the millions of followers, enthusiasts and supporters in the United States of America and worldwide: they are part of the dream and indeed our main reason to be.” 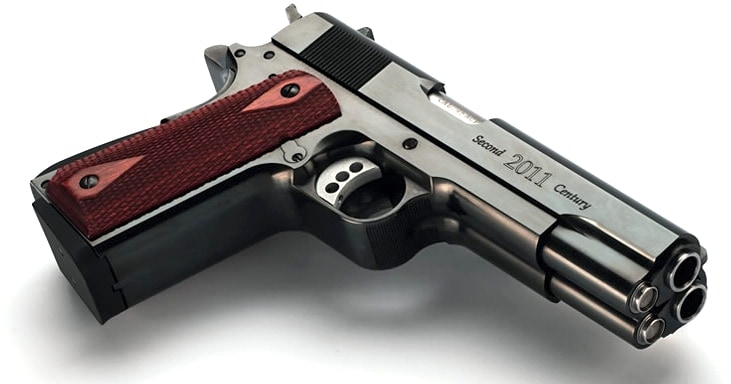 We can’t help but be excited about this crazy handgun. Yes, it’s ridiculous, we completely agree with that. It’s two inches thick and weighs four pounds unloaded. Even with a full set of magazines it’s got a capacity of 8+8+1+1 rounds, and it’s probably going to cost a cubic foot of money.

It’s just… we’re so surprised that this gun is going to even be available. How can we not want to get behind one?

Arsenal says that they will have a full line of firearms and accessories and they will launch all of it at the 2013 SHOT Show. This may mean just the AF2011-A1, but we hope it means their Second Century double 1911 chambered in .38 Super and also their highly-anticipated Strizh pistols.

Their Strizh, or Strike One as they plan to market it in the U.S., is a truly 21st century handgun, a striker-fired pistol built on either a polymer or alloy frame designed for law enforcement and competition use. The Russian ministry of defense has already announced that they intend to retire the Makarov and replace it with the Strizh.

Arsenal is a joint Russian and Italian firm that’s still just a couple of years old, but they have our attention to say the least. Their designs are innovative and promising, and the wait between now and SHOT Show is going to kill us.