Virginia Professor Shows More Guns Do NOT Cause More Crime

Lately, there’s been a push by the Guns.com readership to request articles that are less adversarial in tone and tenor toward the gun control community and are, instead, more educationally driven.

The thought process goes as follows, while it’s fun to have “I-told-you-so” moments with gun control advocates (i.e. gleefully pointing out the exorbitantly high crime rates in the anti-gun Mecca known as Chicago or repeating, ad nauseam, the independent reports by the National Research Council, the CDC, the DOJ, that found the Assault Weapons Ban to be grossly ineffective at reducing gun violence), they ultimately harden the mindset of the opposition.

Let’s face it; no one likes to be told and shown repeatedly that he/she is dead wrong, no one likes to have his/her faced rubbed in the dirt (of their own narrow-mindedness).

Consequently, it would be better for gun owners, who have the facts on their side, to consistently take the high road, to avoid displaying the innate pleasure that comes with browbeating an intellectually inferior opponent, and just report the facts in an empathetic and compassionate tone.

The point is simply that in the ongoing battle to win support for gun rights, one catches more flies with honey than one does with vinegar.  The lesson, be informative, but also be nice.

With that in mind, I turn to a new study that confirms much of what gun owners already know about crime rates and gun ownership.  That is, more guns are not causing more crime – if anything, the opposite is true, more guns in the hands of law-abiding citizens has the potential to reduce crime.

So here are the facts, Virginia Commonwealth University professor Thomas R. Baker examined crime data and gun sales in Old Dominion from 2006 to 2011 and what he found was a negative relationship between gun sales, which increased 73 percent over those five years and gun-related violent crimes, which fell by 24 percent over the same period (when adjusted for population growth, those numbers are a 63 percent increase in sales and a 27 percent reduction in crime) . 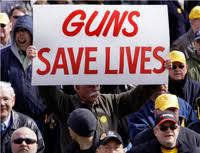 “While there is a wealth of academic literature attempting to demonstrate the relationship between guns and crime, a very simple and intuitive demonstration of the numbers seems to point away from the premise that more guns leads to more crime, at least in Virginia,” Baker, a researcher and criminology theorist, told the Richmond Times-Dispatch.

The numbers breakdown as follows: in 2006, there were approximately 243,251 background checks conducted (Background checks are the standard barometer for gauging gun sales), according to gun-dealer data compiled by Virginia state police.  By 2011, that number had grown to a record-setting 420,829 background checks.  During that same time frame, the total number of violent crimes in Virginia dropped from 23,431 offenses in 2006 to 18,196 in 2011, the Richmond Times-Dispatch reported.

Again, what does this mean?

“So while it’s difficult to make a direct causal link [that more guns are resulting in less crime], the numbers certainly present that that’s a real possibility,” Baker said.

The opposite – that more guns are causing more crime – cannot be derived from the numbers, he told the RT-D.

“It’s mathematically not possible, because the relationship is a negative relationship – they’re moving in the opposite direction,” Baker said. “So the only thing it could be is that more guns are causing less crime.”

“From my personal point of view, I would say the data is pretty overwhelming,” Baker added. “But we’re pretty cautious in the social sciences in talking about causality. We only talk in probabilities.”

Baker also reworked the numbers to look at specific types of firearms and their effects on crime.  In particular, handguns, which are used to perpetrate most violent crimes involving guns.  So, the question then becomes, does an increase in the sale of handguns lead to more violent crime?

The short answer is no.  While handgun purchases increased 112 percent from 2006 to 2011, violent crimes involving the use of handguns dropped by 22 percent.  This trend continued even when Baker factored in crimes where the type of gun was unknown.

“In fact, if all unknown gun types used in violent gun crimes are assumed to have been handguns, then handgun-related violent crime decreased just over 24 percent from 2006 to 2011,” he said.

Well, what about those researchers who claim that having more firearms in society increases the risk of deadly encounters?

So, in the face of all this empirical evidence, what do gun control advocates have to say?

Andrew Goddard, president of the Virginia Center for Public Safety, was rather dismissive of the study.

“I’m not surprised that it would appear that more guns is going along with less crime, because there’s been a downward trend in violent crime anyway,” Goddard told the RT-D.

“Predicting the actions of criminals by analyzing the behavior of legal gun buyers is not likely to be productive,” he added.

Does anyone else see the hypocrisy in this statement?  If that’s the case, why then, do gun control advocates seek to punish gun owners with more gun laws that primarily affect the law-abiding?

Questions for Goddard to consider, undoubtedly.

Goddard also argued that the really important figure is the overall number of gun deaths, not just violent crime rates.

“If you look at the numbers of people who are dying from guns every year, including suicides and accidents, then you’re not going to see a difference,” he said. “Gun sales are going up, and the annual death rate in Virginia is staying pretty much constant.”

Well, factually speaking, gun-related homicides are down as Baker pointed out.  So, unless there’s been a spike in the number of gun-related suicides and accidental gun deaths, that statement cannot possibly be true (of course, if Goddard failed to adjust for population growth, then it’s possible).

Yet, even if it is true, his latter remark tells us all we need to know, “Gun sales are going up, and the annual death rate in Virginia is staying pretty much constant.”  So, what does that say?  It says, quite clearly, guns are not the problem.  More guns in circulation are not causing the total number of gun deaths to rise.

How’s that for being nice and informative?