With 3-Gun shooting being one of the fastest shooting sports in the country, the industry has been paying a lot of attention to casual, serious and professional shooters alike.

Now 3-Gun Nation has put together a new digital magazine that focuses on this sport and nothing else.

3-Gun is an offshoot of practical shooting, which has its roots in self-defense training exercises, but has evolved into a fully-fledged sport of its own. Although it has some elements of self-defense, in practice the equipment and methods of 3-Gun are tailored for competition, drawing on a different style of shooting and a distinctly separate body of knowledge.

And the 3-Gun Nation Magazine reflects that. In their first issue they highlight products, ammunition and techniques that have been honed across countless stages, not battles. Like any fighting style, it has been altered by and for competition. 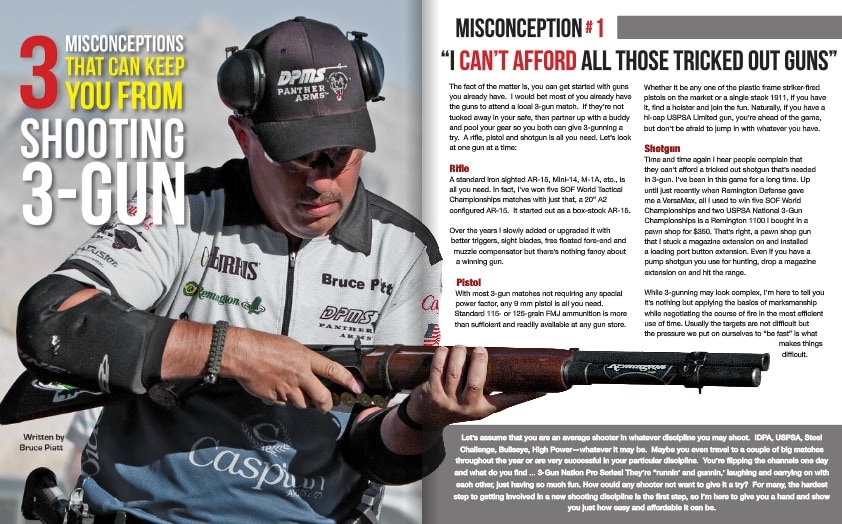 But in all honesty even the ads aren’t out of place. They’ve got a list of sponsors that’s as long as, uh, a 10-round extended shotgun magazine, yeah, and they’re all serious about catering to the 3-Gun and greater practical shooting community. And because it’s a digital magazine, if you see something you like, you can click on it to buy it.

They really thought about how to imbue their print-stylized magazine with Internet graces, including things like videos of competitions and interviews with notable shooters and instructors.

The magazine covers every aspect of 3-Gun, from how to get into the sport for beginners to how to land sponsorship for the old hands. And naturally, you don’t have to be into 3-Gun to benefit from their content. Because 3-Gun touches on all aspects of practical shooting, they have stuff for everyone.

Best of all, 3-Gun Nation Magazine is free. No subscription necessary. All this pure practical shooting goodness comes with no strings attached. You can download it for offline use and print it out, too, which is particularly nice if there’s a certain room you like to peruse your magazines in.

So if you’re into running and gunning, add 3-Gun Nation Magazine to your list of regular online hangouts. So far, we really like what we see and look forward to issue number two. Plus, we really doubt anyone at 3-Gun nation is likely to say anything, you know, stupid.