On orders from Lt. Gen. Richard Mills, effective immediate, the Marine Corps will ban all non-USGI magazines. This guaranteed-to-be unpopular command follows the adoption of the M27 IAR, the Marine’s newest support weapon.

For now, Marines will only be allowed to use USGI magazines with tan, green or black followers.

The M27, based on the HK416, is chambered for 5.56 NATO and accepts standard AR-15/M16/M4/STANAG magazines, but is incompatible with Magpul Gen M2 PMAGs. One of the reasons the Marine Corps put the M27 into service is because it uses the same ammunition and magazines as the M16s and M4s already in service. If an M27 operator runs out of ammo, they can just borrow a magazine from another Marine.

This is going to be a tough pill to swallow. Good magazines are critical to rifle reliability, and there’s no sidestepping the fact that Magpul’s magazines are superior to regular aluminum USGI magazines. However, many polymer magazines including the no doubt millions of PMAGs in use with deployed Marines can not only be incompatible with the M27, they can lead to feeding and jamming problems. 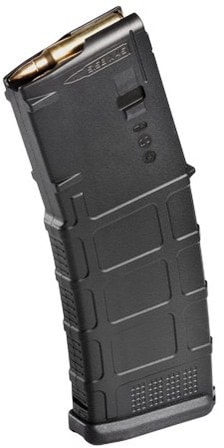 If that’s the rock, the hard place is accepting USGI magazines. They will lead to problems, even as the military is in the process of rolling out updated magazines with modified followers that are much more reliable than the previous magazines issued. Even though the new tan follower magazines are better than the green and black models, their aluminum bodies can’t possibly be as durable as polymer alternatives. This decision could lead to a net drop in reliability across the board, even if it props up reliability in one specific situation.

Magazine manufacturers have been aware of this for some time, which is precisely why Magpul makes two magazines that are compatible with the M27, the EMAG and the recently-introduced Gen M3 PMAG. These magazines are improved versions of the older Gen M2 PMAG and can be used with a wide variety of rifles, including the M4, M16 and M27.

Only time will tell if the Marines will reverse their position, or at least change it to allow Marines to carry magazines that are compatible with all of the Marines’ main service rifles. Magpul has gone to great lengths to demonstrate the extreme durability of their new IAR-friendly magazines.

Some Marine officials have been discouraging the use of non-USGI magazines for some time, either because they knew this decision was coming down the pipe or because they, too, did not think it safe for their Marines to carry PMAGs since the adoption of the M27.

The Marines aren’t the only branch of the military to require that soldiers stick to standard-issue magazines. Recently the Army announced a similar ban shortly after they introduced the new magazines with tan followers. However, the ban was universally criticized and they revised their position just days later.