On Sunday, a 5-year-old girl was shot in the stomach by a stray bullet while she was returning from a baby shower with her family in the Bronx.

The little girl, Hailey Dominguez, is now in “critical but stable” condition, according to the New York Daily News.

Whenever a tragedy like this happens, gun control advocates see it as an opportunity to do two things (a) lament the status quo with respect to the nation’s gun laws (i.e. complain that they’re not strict enough) and (b) criticize the President for his seemingly tepid interest in gun control reform.

In this particular case, it was NYC Police Commissioner Raymond Kelly who addressed the accidental shooting of Dominguez.

“We can never accept the shooting of a child as a part of city life,” Kelly told The New York Daily News.

“We can never accept the notion that somehow children are going to be a part of the casualty count, whether somebody else is targeted or not,” Kelly said, adding, “Children are not supposed to be collateral damage.”

On those points, no one would argue with the Commissioner.  However, there is the matter of dealing with the reality of gun-related violence in a practical and effective way.

Now, the main solution to this problem, if you asked Commissioner Kelly or his cohort, NYC Mayor Michael Bloomberg, is more gun control.  Hence the push by the gun control community to pressure Obama into passing tougher gun laws at the federal level.

In this respect, Kelly rebuked Obama for his silence on the issue, stating, “Maybe the city most affected [by guns] is Chicago. The President’s hometown. But barely a peep out of him.” 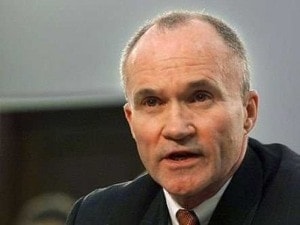 Right, Chicago is awash with violence; the city’s on pace to accrue over 500 homicides this year.  But what’s also interesting, perhaps ironic, is that like NYC, where that young child was shot in the stomach, Chicago’s got some of the toughest gun laws in the country.

So, given this fact, why would Congress or the President for that matter (although, Obama may do so to appease his constituents) opt to double down on gun control measures that are (a) unpopular with the American public and (b) ultimately ineffective at reducing violence?

What’s doubly ironic is that Kelly, in defending the NYPD’s controversial Stop-and-Frisk initiative, made this exact point.

“Yeah, maybe we should adopt policies from other cities that don’t work,” the Commissioner said sarcastically, according to The Daily News.

Bingo!  Using his logic, one has to raise the obvious question, why would the federal government ratify the gun laws of cities that have the biggest problems with crime and violence?

It should be noted that Stop-and-Frisk campaign is an utter failure, as WNYC reported, “out of more than 685,000 stops in 2011, about 770 guns were recovered.  That means about one tenth of one percent of all stops result in the seizure of a gun.”  Moreover, there’s been no statistically significant reduction in the number of shootings since the launch of the campaign in 2002.

We say this all the time (because it’s true) but the optimal way to curtail violence and to help ensure children don’t become collateral damage is to focus on ways to control (or rehabilitate or incarcerate, etc.) the people who are likely to commit crimes – not chip away at the 2nd Amendment rights of law-abiding citizens.

When will NYC and Chicago city leaders begin to understand this?