Kentucky is one of several states that, by law, require local police departments to turn over seized firearms to state authorities so that they may be auctioned off to raise money.

The law, which passed in 1998, was based on the simple premise that instead of destroying confiscated guns it would be much better to have the Kentucky State Police sell them off to law-abiding gun dealers, this way, cash-strapped police departments across the state would receive extra money to purchase much-needed equipment, e.g. bulletproof vests.

Initially, many law enforcement officials were skeptical about the idea of putting these ‘crime guns’ back ‘out on the street.’

But 15 years later, after the auction program has helped to raise more than $7 million, many high-ranking police officers are singing a different tune.

Former Fort Thomas police chief Michael Bischoff was staunch opponent of the law when it first passed.  Now, though, he’s willing to admit – albeit reluctantly – that the auction is a boon for law enforcement.

“When you watched the news at night, and it seemed every broadcast started with a story about someone being shot, you could understand not wanting to add more guns to the mix,” Bischoff, who also served as executive director of the Kentucky Association of Chiefs of Police, told Cincinnati.com.

“Then you’d go to Louisville or Lexington and they wouldn’t have an evidence room, they’d have an evidence building with hundreds of weapons. It’s not hard to see their reasoning in preferring the weapons be destroyed, even now,” Bischoff said. “But the law is the law and, over the years, KSP has worked hard to turn it into something beneficial.”

While the old breed may still be too stubborn to fully admit that they were wrong, the next generation of police chiefs is more inclined to praise the program.

Covington Police Chief Spike Jones told Cincinnati.com that the program is not “an evil alternative” and that through the KSP auction his department has received over $22,000 in grants despite the fact that they only submit approximately 20 guns per quarter to state authorities.

He added that the money has been put to good use.  Officers, who used to have to come out-of-pocket to purchase ballistic vests, are now getting them for free.

“That funding has taken the burden off our officers and off the city,” he said. “There’s no gun shortage. Even if we took all those (auctioned) guns and melted them down, someone is going to make more guns to replace them. Someone’s going to make money producing those guns. If we can get equipment in return, we should.” 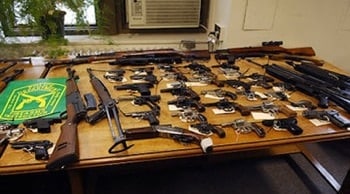 “From our point of view, it’s been a very good program,” said Butler, who spoke about the thousands of dollars his department has received over the years.  “On the other hand, we’re not dealing with the same numbers of gun crimes that a Louisville or Lexington, or even Covington, does.”

Despite the success of the program, there are critics – many of which reside within the ranks of the gun control community.

According to attorney Lindsay Nichols, who represents the Law Center to Prevent Gun Violence, the auction is a problem because of the state’s relatively lax gun laws.

She told Cincinnati.com that Kentucky doesn’t license gun owners, require background checks on private gun sales, or have its own state-run background checking system (instead it relies solely on the FBI-run NICS).

“Because of that, it’s easier for guns to get into the hands of dangerous people – convicted felons, domestic abusers, the mentally ill. We just released a report ranking the states by the strength of their gun laws. Kentucky ranked 43rd,” she said.

The combination of weak laws and the KSP auction is “worrying,” said Nichols. “[The auction] injects more guns into an already unsafe situation.”

This year, 2012, the KSP auction program will likely raise more than $1 million for law enforcement, according to KSP’s Sgt. Brian Stafford, who oversees the program.

“Every officer, I think, is torn by this issue. Would you like to see fewer guns on the street? Sure. But when we’re able to do so much good for our departments, it’s hard to argue against,” Stafford told Cincinnati.com.

All things considered, the KSP auction program is likely here to stay.  How do you feel about police auctioning off confiscated firearms?