This past August, Illinois Gov. Pat Quinn used his amendatory veto power to turn a moderately pro-gun piece of legislation into a ban on semi-automatic rifles, high capacity magazines and .50-caliber rifles.

Initially, Senate Bill 681 was crafted to allow law-abiding Illinois residents to purchase ammunition online or via the mail from Illinois suppliers, under current law residents can only buy ammo from out-of-state dealers.

The bill had a groundswell of support until Gov. Quinn got his hands on it.

Citing the recent shooting in Aurora Colorado, that left 12 people dead and 58 wounded, Gov. Quinn said that the “proliferation of military-style assault weapons and high-capacity ammunition magazines undermines public safety and the right of personal security of every citizen.”

“There is no place in the state of Illinois for weapons designed to rapidly fire at human targets at close range,” Quinn added.

He then proceeded to gut the bill and add the language that made S. 681 an Assault Weapons Ban.

That was back in August, 10 days after the Aurora massacre.  But on Wednesday the state Senate finally had a chance to vote on the measure.  Overwhelmingly, in a 49-4 vote, the senate rejected Quinn’s modified bill.

The sponsor of the original S. 681, Sen. Dave Luechtefeld (R-Okawville) lamented the Governor’s backdoor political tactics, suggesting Quinn overstepped his powers in meddling with the bill.

“If he wants to do something on assault weapons, there’s a proper way to do it. He should go find a sponsor and introduce a bill,” Luechtefeld told the Quad-City Times. 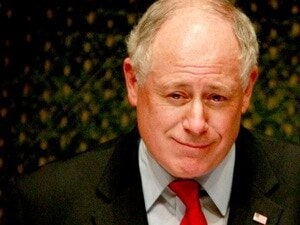 Though, as Luechtefeld alluded to, the purpose of Quinn’s rewrite wasn’t so much to pass an Assault Weapons Ban, which would be a political impossibility given the makeup of the state House and Senate, but to simply hijack a pro-gun bill and draw publicity to Quinn’s pro-gun control agenda.

“This was a way to get some publicity on the issues that arose after the Colorado incident,” Luechtefeld said.

Indeed.  And in this regard, Quinn’s amendatory veto was a success.

The proposal will now go before the House for further debate.  It’ll be interesting to see if lawmakers can salvage the original text and eventually pass a bill that allows law-abiding residents to purchase ammo online from in-state suppliers, as was initially intended.

Another interesting thought, if the state House and Senate do pass a bill allowing residents to buy ammo online from Illinois dealers, would Gov. Quinn sign it into law or would he outright veto it (in the traditional sense of the term ‘veto’)?