Is Jesus Pro Gun? Churches Around the Country are Increasingly Embracing Gun Owners

Here’s a rather interesting question, is Jesus Pro Gun (or pro self-defense)?

Well, since the bible is interpreted differently, it probably depends on whom you ask.

Real quick though, those who say Jesus is pro self-defense might point to Proverbs 25:26, which states, “A righteous man falling down before the wicked is as a muddied fountain, and a polluted spring.”

On the other hand, those who say Jesus is pro passivity would probably reference Mathew 5:39, “But I say unto you, That ye resist not evil: but whosoever shall smite thee on thy right cheek, turn to him the other also.”

While Jesus’s thoughts on guns and self-defense remain open for debate, what is clear is that, increasingly, churches around the country are becoming more accepting of the gun community.

In fact, some churches are outright targeting gun owners as potential converts.  To this end church leaders in several different states (Texas, North Carolina, Ohio, among others) have opened their doors to concealed carry weapons classes.

“We want to draw people into our campus,” Rev. Ryan Bennett of the Central Baptist Church in Lexington, N.C. told the local newspaper. “And we’re going to try anything that we can to do that.”

Bennett’s church began conducting CCW classes back in March.  He said the goal is to promote the safe use of firearms in addition to spreading the word of God.

“We promote responsibility. We don’t endorse violence,” he said. “It’s just another way to draw people in.”

Bennett, himself, carries a 9mm pistol at all times.

In Ohio, it’s a similar situation.  Preacher Jeff Copley, at the local Church of Christ in Marengo, explained the need to appeal to the male demographic in his region.

“Church has done a good job with coffee klatsches or whatever, but we haven’t really reached out to guys,” Jeff Copley told The Daily. “And guys in Morrow Country, they shoot and they hunt.”

By offering concealed carry classes, which satisfy the Ohio permit requirements, Copley gets a chance to meet gun owners who may also have an interest in connecting (or reconnecting) with God. 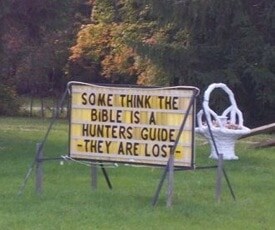 “I grew up going to church, but hadn’t attended in a number of years,” 52-year-old David Freeman, a local engineering manager who attended a firearm safety class at the church, told The Daily. “Always considered myself a Christian. I came for the gun classes and have been coming back for two years.”

Though, not everyone in the area sees the nexus between God and guns as a natural fit.  One neighbor, who owns property immediately adjacent to the church, posted a sign in protest of the gun owner outreach initiative.

“Some think the Bible is a hunter’s guide,” the sign reads. “They are lost.”

Copley just shrugged off his town critic, telling The Daily that it actually has served to boost support for the cause.

“Frankly the sign has been an attendance driver,” he said. “We’ve had two families come and place memberships because they said this is the kind of thing we’d like to support.”

What do you think of churches making more of an effort to embrace gun owners?  Do you see an explicit connection or link between responsible gun ownership and Christian values?  Also, to circle back to the initial question, is (or was) Jesus pro gun/pro self-defense?