The LaserLyte Venom: the gift for the mini-revolver that has everything

People are already criticizing the usefulness, even the rationality behind pinning a laser sight onto a pocket revolver. What good could this possibly be in a self-defense situation? Why bother putting a laser sight on a mini revolver? This is just another case of a company trying to convince people to buy something ridiculous!

To those people, listen. In a free country with mini revolvers and laser sights, there will always be laser sights on mini revolvers. Also, LaserLyte nailed it, the Venom looks cool. The contrast, the squared lines. It looks pretty good on the Mini Masters, too, NAA’s “full-size” mini revolvers. 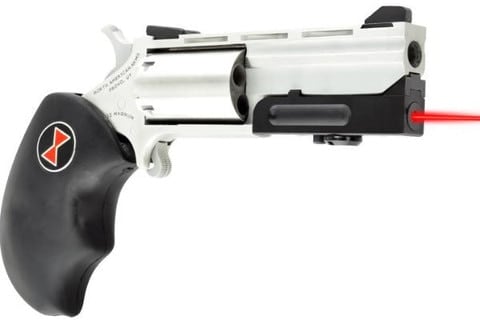 If you’re going to get a mini revolver, you may as well go the full distance. Get yourself a Black Widow with adjustable target sights and a slick underlug cylinder pin-mounted laser. Really, unless you’re going with a classy case-hardened NAA mini revolver, we don’t see any reason why you shouldn’t.

Apart from using extra-teeny type 337 button cells, the Venom doesn’t differ from LaserLyte’s other laser sights in terms of performance. It gets five hours on a charge of constant-on use and 10 in pulse mode and shuts off automatically after six minutes of use. The laser can be seen at a distance that’s just gotta be way further than the gun is effective.

The Venom is built into a slug of 6061 T6 aluminum, it’s not going to be easy to damage. It measures in at about 1.8 inches long and .4 inches wide and tall. It weighs just .6 ounces, bringing the total unloaded weight of a Black Widow to a whopping 9.2 ounces. You can see more details in the press release here.

The MSRP for the Venom is $160, so we expect real-world prices to be a lot closer to $100. Prices for NAA’s mini revolvers are up right now, as they make great gifts and it’s the holiday season, but they can normally be found for around $250. All in, a Black Widow and a Venom make a terrific fun gun, conversation piece, and if absolutely necessary, pocket pistol.

LaserLyte has a long history of accessorizing North American Arms revolvers. If you don’t have a Black Widow or a Mini Master, they make topstrap-mounted laser sights for other NAA pistols. Why mount them to the top? Because there’s no room under the barrel when you’ve got your bayonet readied. 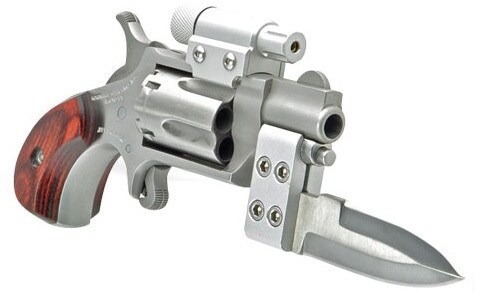