“You want me to stick it in my pants and shoot my damn dick off?”

“So now you’re a sharpshooter?”

Well this is a hell of a way to end a week on. There’s this video of a man—dude or bro, actually, fit the bill much better—shooting himself in the underpants zone. It’s to one-up the stapler guy. It ends much like you’d expect. Badly.

The matter of whether or not it’s real is another thing entirely. (If you would like to watch the original, er, uncut video, it’s right here. Warning, even more Not Safe for Work; Not Safe for Life.)

There are two things going against this video of what is probably a seriously drunk dude taking a pistol to his own teabag. Despite the bad audio, the amount of noise a subcompact .380 is capable of producing is substantial. His screaming sounds louder than the report. That could just be the bad recording, though. The case and the hole in the desk look real enough.

Second is, and we’re not trying to be morbid here, there is a noteworthy lack of pink mist. Even if he just—hurts just thinking about this—even if he just grazed the nutal sack, there’d be junk fluid everywhere. There are a lot of blood vessels in that region, and the slightest bit of damage done would cause enthusiastic bleeding, and there’s nothing there, not even on his hands. It’d be all over the desk if he actually put one in through a giggleberry. 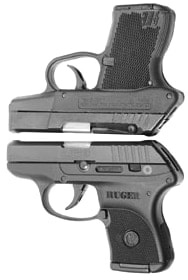 So we’ll ask you.

Honestly, even if he didn’t shoot anything, the concussive blast from the propellant gas compressed between the muzzle and the desktop that close to the beanbag is probably enough to make you wish you’d just volunteered to slam your coinpurse in a deep freeze. They have that rubber seal and at least it’s cold in there. If number one is true then even if he faked number two, the muzzle blast to his knackers probably took the wind out of him.

Finally, whether or not this is real, if you’re trying to remove yourself from the gene pool to prove how tough, nay, baller you are, don’t half-ass it. Please, think of the children we don’t want you to make.

There is one lesson to be learned from this video, whether or not it’s genuine or—apologies in advance—total bollocks.

It’s not about caliber, it’s about shot placement.