Many gun owners are on edge with the re-election of President Barack Hussein Obama, with good reason – as we discussed in a previous Guns.com article.

Among the more troubling things Obama has said with respect to gun ownership was the explicit endorsement of an Assault Weapons Ban during the second presidential debate.

“…But I also share your belief that weapons that were designed for soldiers in war theaters don’t belong on our streets,” Obama said.

So, we know that President Obama is interested in pursuing a Clinton-Era AWB during his second term.

The question many gun owners have is what will the Obama AWB look like?

Well, leave it up to the Internet to produce the Obama ‘Gun Ban List.’  That is to say, there is an email chain going around that claims to know what guns will be banned under an Obama AWB.

Now there are two important things to note about the list (a) someone took an article written by gun author Alan Korwin in 2009, slapped on a new introductory paragraph and re-circulated it as though it was written today and (b) the guns on the list were from a Democratic bill, HR 1022, that was proposed during the end of Bush Administration.  HR 1022 died in 2009, after being referred to a committee. 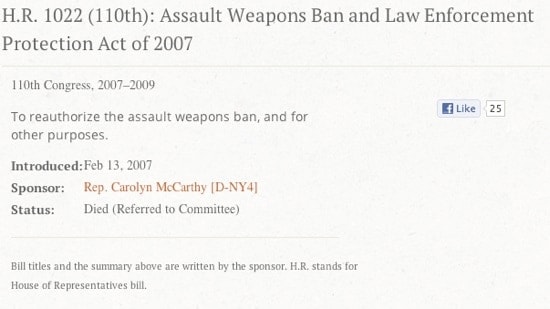 Here it is, folks, and it is bad news. The framework for legislation is always laid, and the Democrats have the votes to pass anything they want to impose upon us. They really do not believe you need anything more than a brick to defend your home and family. Look at the list and see how many you own. Remember, it is registration, then confiscation. It has happened in the UK, in Australia, in Europe, in China, and what they have found is that for some reason the criminals do not turn in their weapons, but will know that you did.

Remember, the first step in establishing a dictatorship is to disarm the citizens.

None of the above was written by Alan Korwin.  As Mr. Korwin told Guns.com, “I did not write that inflammatory paragraph and its next sentence, even though someone has attributed that to me.”

Gun-ban list proposed. Slipping below the radar (or under the short-term memory cap), the Democrats have already leaked a gun-ban list, even under the Bush administration when they knew full well it had no chance of passage (HR 1022, 110th Congress). It serves as a framework for the new list the Brady’s plan to introduce shortly. I have an outline of the Brady’s current plans and targets of opportunity. It’s horrific. They’re going after the courts, regulatory agencies, firearms dealers and statutes in an all out effort to restrict we the people. They’ve made little mention of criminals. Now more than ever, attention to the entire Bill of Rights is critical. Gun bans will impact our freedoms under search and seizure, due process, confiscated property, states’ rights, free speech, right to assemble and more, in addition to the Second Amendment. The Democrats current gun-ban-list proposal (final list will be worse):

Rifles (or copies or duplicates):

Pistols (or copies or duplicates):

Shotguns (or copies or duplicates):

Streetsweeper. Catch-all category (for anything missed or new designs):

A semiautomatic rifle that accepts a detachable magazine and has:

(i) a folding or telescoping stock,

(iii) a pistol grip (which includes ANYTHING that can serve as a grip, see below),

(iv) a forward grip; or a barrel shroud.

A semiautomatic pistol that has the ability to accept a detachable magazine, and has:

(i) a second pistol grip,

(iii) a barrel shroud or

(iv) can accept a detachable magazine outside of the pistol grip, and

(v) a semiautomatic pistol with a fixed magazine that can accept more than 10 rounds.

A semiautomatic shotgun with:

(i) a folding or telescoping stock,

(iii) the ability to accept a detachable magazine or a fixed magazine capacity of more than 5 rounds, and

(iv) a shotgun with a revolving cylinder.

Frames or receivers for the above are included, along with conversion kits.

Attorney General gets carte blanche to ban guns at will: Under the proposal, the U.S. Attorney General can add any “semiautomatic rifle or shotgun originally designed for military or law enforcement use, or a firearm based on the design of such a firearm, that is not particularly suitable for sporting purposes, as determined by the Attorney General.”

Note that Obama’s pick for this office, Eric Holder, wrote a brief in the Heller case supporting the position that you have no right to have a working firearm in your own home. In making this determination, the bill says, “there shall be a rebuttable presumption that a firearm procured for use by the United States military or any law enforcement agency is not particularly suitable for sporting purposes, and shall not be determined to be particularly suitable for sporting purposes solely because the firearm is suitable for use in a sporting event.” In plain English this means that ANY firearm ever obtained by federal officers or the military is not suitable for the public.

The last part is particularly clever, stating that a firearm doesn’t have a sporting purpose just because it can be used for sporting purpose — is that devious or what? And of course, “sporting purpose” is a rights infringement with no constitutional or historical support whatsoever, invented by domestic enemies of the right to keep and bear arms to further their cause of disarming the innocent.

Mr. Korwin iterated his thoughts with respect to HR 1022, saying that, “No one, including the Democrats, expected that to have a chance of passage at that time, under President Bush. It simply showed what they wished for, and they introduced it into Congress.”

So, in short, as Mr. Korwin told Guns.com, “Saying “Obama’s Gun Ban List Is Out” — and attributing that to me, is false.  I would sure like to know who did that.  But the list of guns was real, it was proposed in Congress almost four years ago.”

Looking ahead to Obama’s second term, Mr. Korwin expressed unease, “Who knows what they’re planning now. Wait and see. I doubt it will be good, if your rights mean anything.  As before, I’ll be watching, and will continue to post these things as I find them.”

You can check out Mr. Korwin’s thoughts and keen insight on different legislative matters by visiting his home page: https://www.gunlaws.com.  Also, you can see his original posting by clicking here.