Senators Coburn and Schumer Argue Over Gun Control for Veterans

The law or, rather, VA policy under question states that any military veteran assigned a fiduciary trustee to act on his/her behalf is automatically declared “mentally defective” and is reported to the FBI’s National Instant Criminal Background Check System (NICS), the database Federal Firearms Licensees use to determine whether a prospective buyer is eligible to buy firearms and/or explosives.

Anyone deemed “mentally defective” in the system will be unable to buy a firearm.

In the eyes of Sen. Tom Coburn (R-OK) this VA policy does a disservice to those who protect and defend our country.  Consequently, Coburn attempted to add an amendment to the $631 billion defense bill for 2013 that would require a judicial authority to determine whether veterans pose a threat to themselves or others before they lose their right to keep and bear arms.

“All we’re asking for the veterans of this country is that if their rights are taken away, that it be adjudicated by a judge or a magistrate . . . rather than a social worker at the V.A.,” Coburn said Thursday night.

However, Sen. Charles Schumer (D-NY) prefers the status quo, arguing that it has the potential to save lives.

“I love our veterans, I vote for them all the time. They defend us,” Schumer said. “If you are a veteran or not and you have been judged to be mentally infirm, you should not have a gun.”

Schumer’s perspective was echoed by Dan Gross, president of the Brady Center to Prevent Gun Violence.

“We’re talking about people who have some form of disability to the extent that they’re unable to manage their own affairs,” Gross told the Associated Press. “If you’re deemed unable to handle your own affairs, that’s likely to constitute a high percentage of people who are dangerously mentally ill.” 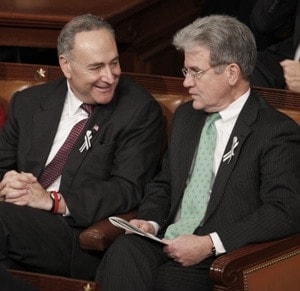 But some veterans’ organizations argue that the policy is prejudicial and has the potential to stigmatize certain mental health issues that are common among troops, such as traumatic brain injury or post-traumatic stress disorder.

“We want to remove these stigmas for mental health treatment. It’s a combat injury,” Tom Tarantino, chief policy officer for Iraq and Afghanistan Veterans of America, told the AP.

“They wouldn’t be doing this if you were missing your right hand, so they shouldn’t be doing it if you’re seeking treatment for post-traumatic-stress-disorder or traumatic brain injury.”

According to the VA, since 1998, approximately 127,000 veterans have been added to the NICS.  Of those, only 185 have lobbied to have their names removed.

The VA also told the AP that any veteran can appeal the “mentally defective” finding based on new evidence.  Moreover, even if the VA insists that the veteran in question is infirm, he (or she) can petition the agency to have his firearm rights restored on the basis of not posing a threat to public safety.

Coburn will probably stop his push to add the amendment to the defense bill, according to congressional aides.  He will, however, continue to pursue the policy change on future bills coming to the Senate floor.

It should also be noted that Coburn is not alone in his effort, as Guns.com has previously reported, Sen. Richard Burr (R-NC) and Sen. Jim Webb (D-VA) co-sponsored a bill, the Veterans Second Amendment Protection Act, that would also ensure veterans had their day in court before they were stripped of their right to keep and bear arms.

This bill is currently waiting further review (for more on the status of this bill, click here).