After drawing the entire world’s attention to their plan to 3D print guns, Defense Distributed aka Wiki Weapon has finally gotten around to 3D printing a firearm, at least in the legal sense. They made an AR lower. They made a crappy AR lower that broke just after firing just a few rounds. Watch them test-fire it.

Does that mean the end of the Wiki Weapon project? Not likely. It’s clear that the materials Defense Distributed are not up to the task, although commercially-produced polymer lowers have proven that you can make a reliable and tough AR with a plastic receiver.

And while we could say that it’s only a matter of time before 3D printing technology develops the ability to create functioning AR lower receivers, that technology already exists. In fact, the whole Wiki Weapon project was inspired by it, the HaveBlue 3D printed AR. 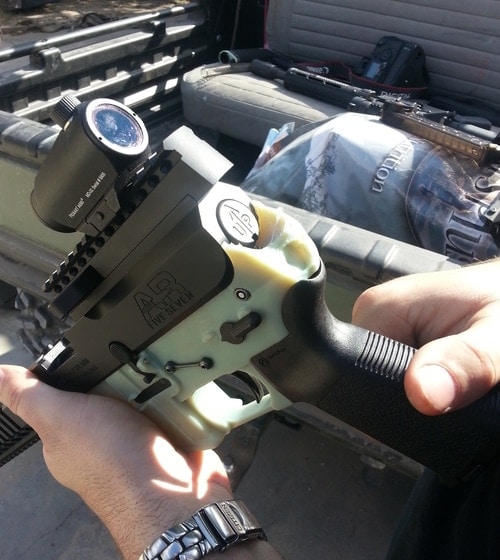 So if HaveBlue has been 3D printing AR lowers since before Defense Distributed existed, and if the Wiki Weapon uses the HaveBlue blueprints, why did their 3D printed lower break when the original worked just fine, even with a .223 Remington upper?

There are two reasons for this. It isn’t surprising that a AR-57 upper broke a lower. If you look at the damage, it’s all to the buffer tower. The AR-57 upper is direct blowback-operated. Unlike gas-operated uppers, these blowback uppers start to cycle immediately after firing, and all the energy from the cartridge is sent into the buffer tube. With a gas-operated upper, that energy would have to first act on the upper, which would spread the recoil across not just the buffer tube extension but also the takedown pins. This upper focused all of the recoiling energy into one spot on the lower; even with the low-power FN 5.7x28mm cartridge, the upper still puts more stress on the buffer tube extension than it could reasonably withstand.

Still, for a 3D printed lower to be considered viable, it needs to work with the full spectrum of AR uppers, including blowback uppers. But it must also be said that HaveBlue ran a .22 Long Rifle upper on his 3D printed lower without problems. While 5.7x28mm is certainly more energetic than .22, there’s still more to explain why Wilson failed where others have succeeded.

First is the materials used. 3D blueprints can be used with a wide variety of printers and printers have a large selection of thermoplastics to work with. Like with all tools and materials, some are better suited for the job than others. Defense Distributed used a Objet printer where HaveBlue used a Stratasys printer, each also using different plastics and methods. Some 3D printing enthusiasts have criticized Defense Distributed for using a low-resolution printer and using the polyjet instead of the fused deposition modeling method, which results in materials properties better suited for gun parts.

In a sense, Defense Distributed is trying to build a better mousetrap. We appreciate their ideal of creating a decentralized method of making firearms; gun ownership is a right and using 3D printing to enable that is noble. However, by doing it wrong they do injustice to both 3D printing and home gunsmithing. 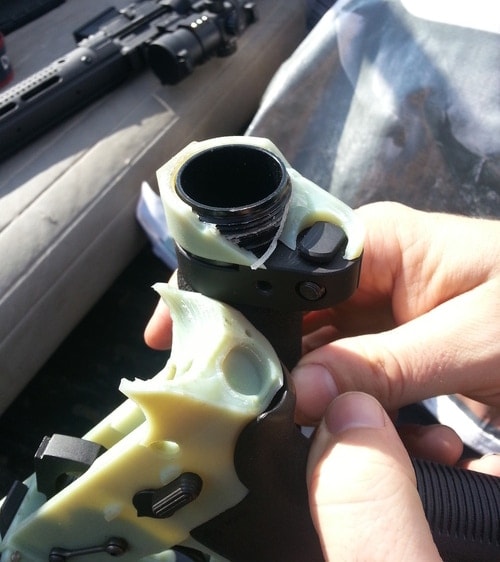 It’s getting easier and easier to make guns at home. With the Internet connecting hobbyists and hopefuls allowing amateur gunsmiths to learn and share together, more people than ever are getting into gunsmithing. Whether it’s with drill press and 80 percent kits, a desktop CNC milling machine or a 3D printer, the ability to make guns is well on its way to decentralization on it’s own. Here’s a lower receiver made from wood. Hell, this guy made an AK out of a shovel.

Defense Distributed is only going to alienate home gunsmiths and 3D printing enthusiasts if they continue in this manner. Wilson has stated that their next version will have some changes, but none of them include using different materials or methods or calling in some professional help. They need to tap experts in both fields if they want to succeed, not just in proving the feasibility of 3D printing gun parts, but in the eye of the public.

Of course, some people will always recoil at the notion of blatantly teaching people how to make guns. Many people in the 3D printing community have denounced Wilson and the Wiki Weapon project, for fear of regulation and reprisal, that they are going to destroy the reputation of 3D printing. HaveBlue responded to that on his blog, and we couldn’t agree more.

“I’d like to point out that using a drill press is even easier than a 3D printer, and far more of them are ‘in the wild.’ In fact, thousands of people have used nothing more than a drill press to complete an 80 percent lower receiver (according to Nathan at Tactical Machining). As far as requiring a skilled machinist to operate a mill or lathe, well, I am exhibit number one in refutation of that claim. Many years ago, with zero training on the lathe at work other than ‘move these handwheels to make the tool bit move that way,’ I was able to machine a new bolt for my paintball gun. While machining a lower receiver on a mill is certainly a more complex project, the abilities of a true machinist are not required (though I admit it’s a romantic notion).

“I…disagree that the spread of 3D printers will force some sort of legislation, and I maintain my position that 3D printers (as applied to firearms, at any rate) will be viewed as simply another machine type.”