A coalition of gun control advocates have been working hard in Colorado to ensure that at least four gun control measures are introduced and debated in the 2013 legislative session.

Tentatively speaking, those measures include a ban on assault weapons, a ban on high-capacity magazines purchased online, a concealed carry ban on college campuses, and tougher background check laws that aim to do a better job identifying the mentally ill.

Who is leading the charge to forward these measures?

Well, there are the local gun control organizations, Colorado Ceasefire and Sane Alternatives to the Firearms Epidemic (SAFE Colorado), but – and this should come as no surprise – New York City Mayor Michael Bloomberg and his national coalition, Mayors Against Illegal Guns, is also behind this push for tougher gun laws in the Centennial State.

With respect to the ban on assault weapons, Rep. Rhonda Fields (D-Aurora) told The Colorado Statesman that she’s taking a careful approach with this measure after having trouble determining what exactly an “assault rifle” is.

“It was on the table, but it’s been removed right now. We’re finding it difficult as it relates to defining what an assault weapon is,” explained Fields. “When you look at how it’s defined, so many people have assault weapons, so we are trying to narrow down the scope and maybe look at one specific type of ban, not banning all assault weapons.”

As for the ban on the online sale of high-capacity magazines, Fields said that is a more straightforward proposal.  She expects to have a final draft in the near future.

Probably the least controversial of the measures, at least in theory, is the one that will be designed to boost the state’s mental health reporting laws either through strengthening existing laws or drafting new ones that attempt to increase communication between mental health professionals, the courts, and the FBI background check system.

Fields said that Gov. John Hickenlooper has expressed interest in such a proposal.  Although Hickenlooper is a Democrat, he tends to lean pro gun.

“He would be interested in something like that if we can come up with the right policy,” Fields told the Colorado Statesman. “We have to have all the professional providers on board with what might change.”

The “right policy” – obviously, “right” being the operative word there.

“I’m definitely going to work with [Hickenlooper] once I get it defined and get all the stakeholders,” Fields continued. “I’m going to want him to take a look at it… to see if this is something that they can live with.” 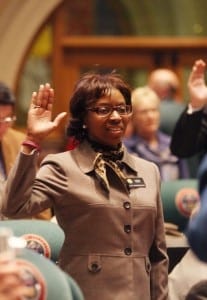 The last measure on the docket, the one targeting concealed carry on campus, is being championed by Rep. Claire Levy (D-Boulder).

Levy proposal wouldn’t outright ban concealed carry on campus, but it would allow university systems in Colorado (which are, by and large, pro-ban) to make the decision for themselves.

Under current law, only the state legislature can regulate firearms – something the University of Colorado Board of Regents found out the hard way following a state Supreme Court ruling in March that overturned the previous ban.

“That was a statutory interpretation, and it was not a Second Amendment decision,” explained Levy to the Statesman. “It was an interpretation of a statute, and the question was whether CU, specifically, was preempted under the language that refers to local governments… I’ll just change the law.”

So, there you have it, four bills that are likely to make there way into the 2013 legislative session.

What do gun rights advocates make of the situation?

“I encourage them to go for the gusto, because the truth is this, if they want to lose the majority that they just gained [in the Nov. elections], I strongly suggest that they charge full ahead into bans on firearms and major gun control,” said Dudley Brown, the executive director of Rocky Mountain Gun Owners and the National Association for Gun Rights.

“That’s a perfect way for them to lose the majority immediately,” he added.