For those of you who predicted that November would be a good month for gun sales, well, the numbers are in…

Truth be told it wasn’t just a ‘good’ month, it was a record-shattering month!

As the National Shooting Sports Foundation noted in a recent press release, Nov. 2012 is now the record holder for most background checks conducted in a single month.

Here’s a breakdown of the numbers, as reported by the NSSF:

This marks the 30th straight month that NSSF-adjusted NICS figures have increased when compared to the same period the previous year. The number reported for November 2012 eclipsed the previous high in December 2011 by 8.1 percent.

The adjusted NICS data were derived by subtracting out NICS purpose code permit checks used by several states such as Kentucky, Iowa and Michigan for concealed carry permit application checks as well as checks on active concealed carry permit databases. Though not a direct correlation to firearms sales, the NSSF-adjusted NICS data provide a more accurate picture of current market conditions. In addition to other purposes, NICS is used to check transactions of firearms sales and transfers on new and used handguns and long guns. 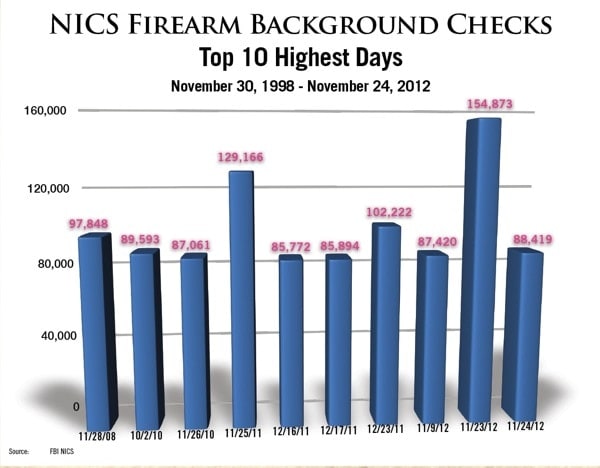 Much of the bump in sales this Nov. can be attributed to a stellar Black Friday, which is typically one of the most active day for gun purchases – at least five of the busiest days for background checks occurred on Black Fridays.

Like the month itself, this Black Friday – Nov. 23 – set an eye-popping record.  That is, it was the single busiest day for gun sales in history (at least, on the basis of NICS figures).

“Responsible firearms ownership is popular, mainstream and growing,” said NSSF President and CEO Steve Sanetti in response to the surge in sales and background checks.

“Americans in record numbers are choosing to own firearms for target shooting, hunting, collecting and personal and home protection,” he added. 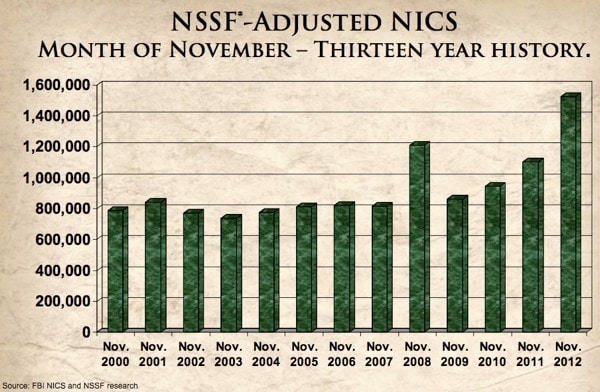 In looking at the ‘NSSF-Adjusted NICS Month of November – Thirteen Year History’ it appears that the last busiest November was, not surprisingly, Nov. 2008.  This suggests that, along with the holiday season, the election and subsequent re-election of president Obama has been a primary motivating factor for gun purchases.

In other words, it seems as though we’re at the precipice of (or perhaps in the midst of) a second Obama gun boom.

Though, from you perspective, and if you had to isolate one factor to explain the record-setting month, what would you attribute it to?  The holiday season?  The re-election of president Obama?  A growing enthusiasm for gun ownership?  The economy? 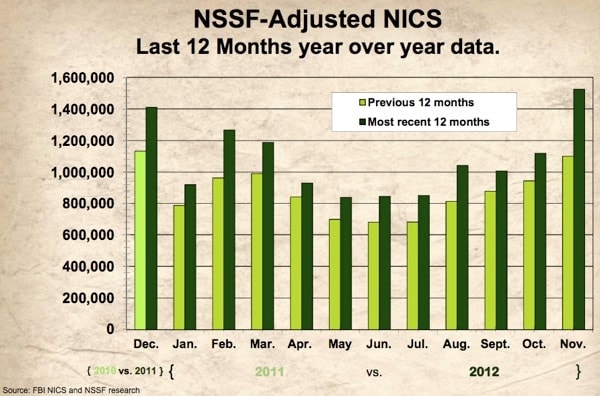