Unity Tactical, the people behind the Atom modular Glock slide, are now taking orders for their Fusion system, a modular mount for rifle accessories and sights. For a limited time, all pre-orderers will receive 20 percent off the sticker price, and anyone who buys four or more Fusion parts will also get a free Unity Tactical T-shirt.

This promotion will run throughout December and every week Fusion will run a Facebook contest where winners will get free Fusion stuff. If you’re interested in that, you’ll want to pay attention to their Facebook page. 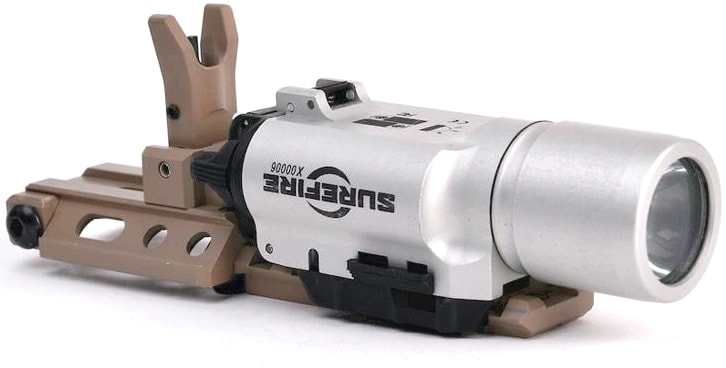 Right now, Unity has finalized six modular accessories to go with their main hub, the part everything else mounts to. They are a flip-up backup iron front sight, two forward rail extensions, two rail mounts, one standard and one offset and a light ring mount. You can see them all right here. They plan to add many more accessories starting next year, including fixed front sights, standard and micro height for non-AR-type rifles, proprietary flashlight mounts, universal and proprietary red dot sight mounts, spare battery compartments and more. 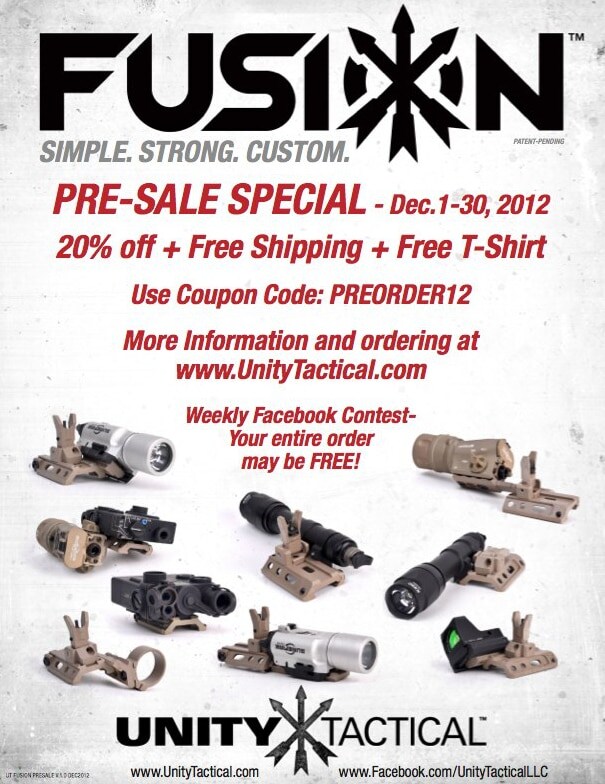 The promotion ends December 30, 2012 and they have limited stock. They expect to sell their first production run completely, so if you want to get in on it you’d better hurry. Fusion parts will start shipping to customers no later than February 21, 2013.

Fusion parts are available in both black and flat dark earth. Prices for parts range from about $100 for the hub to $25 for a standard rail section, but that’s before the 20 percent discount. They’re not inexpensive but not out of line with other premium front sights, and that doesn’t take into account the modularity and wealth of configuration options.

We said it before and we’ll say it again, this multi-mount can be configured in more ways than you could ever realistically find uses for. Not that we have a problem with that; it’s shaping up to be a complete solution to quickly and easily configure and reconfigure your rifle for whatever you want it to be able to do.

And because it’s modular, if you decide you don’t like the way you have it set up, you can always change your mind down the road.

While this will no doubt be popular with the tactically-minded rifle enthusiast, the Fusion modular mounting system is optimal for military and law enforcement because it adds a lot of real estate to carbine-length handguards. It’s also a boon to anyone who isn’t allowed to fundamentally alter their rifle but wants to add greater functionality.

If you don’t have a lot of option when it comes to customizing your rifle or are the type who can’t have too many options, you really should check out Unity Tactical. They’re crafty and their stuff shows a lot of promise.