As long as there have been guns, there have been women shooters.  And they’ve made do with the guns and gear designed for men.  And why not?  It works.  And I’m the first to acknowledge that some women shooters have no desire, whatsoever, to carry a concealed handgun in a pink holster, or wear jewelry made from bullet casings.  But some do, and the list that follows is for them.

All of these ideas com from GunGoddess.com, a retail site that might make the shopping easier.  This list is a bit random, and designed more to show the variety of what is available. 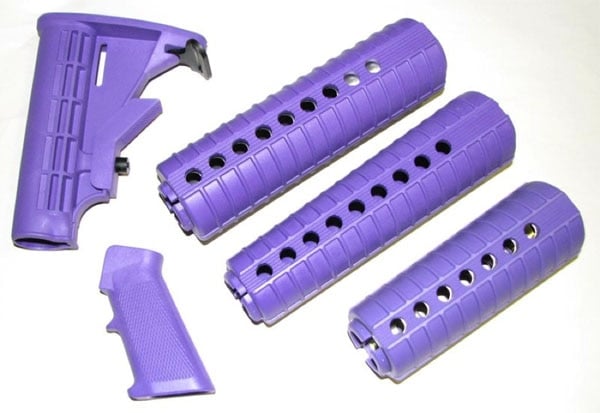 Tactical black can be so boring.  Why not liven up a rifle with a little bit of color?  AR furniture is available in any number of colors, including pink, but I think the purple is a bit less garish (though it still makes a statement).  This assumes, of course, that she has an AR.

Ar furniture ranges in price.  The purple set above retails for $140. 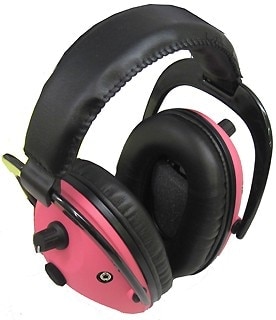 Shooting is so much more fun when you aren’t in pain afterwards.  Hearing protection is invaluable.  Pro Ears makes amazing products, and they come in many different colors and patterns.

These are available with electronic amplification and noise reduction (if you want to foster conversation), or without (if you’ve had enough conversation and would rather just shoot).

GunGoddess.com is selling theirs for $289.95 (with the electronics) or $39.95 (without).  But the price is worth it; you get what you pay for in hearing protection.

I can’t say enough about Pro Ears.  After reviewing them earlier this year, they are all I use.  They are comfortable and incredibly rugged.  The amplification is ideal for hunters who may be sitting for long periods of time listing for game.  And shots register like gun shots in the movies.

There are hundreds of holster options. But maybe you know someone who needs some frilly pink ostrich in their life.  Maybe they need a little crossed-six gun bling.  If so, look no further.  And shell out $64 bucks. 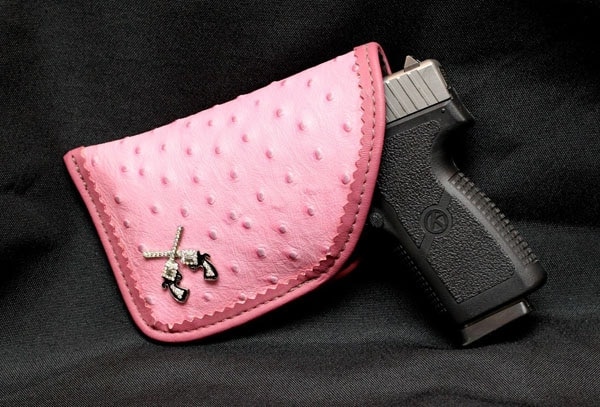 A concealed carry holster isn’t often seen, but why not dress it up?  It is a personal touch.  But it would make a handy frame of reference in a dimly lit gun safe.  Admittedly, there are more practical options, and GunGoddess.com has those, too, but I just couldn’t pass this one up. 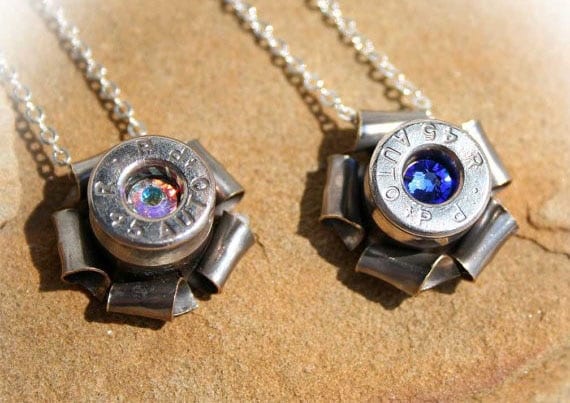 This is an odd mix of recycling and art.  You would have to trust your gut on this one, to know if jewelry made from spent brass would be a great gift, a novelty, or an insult. 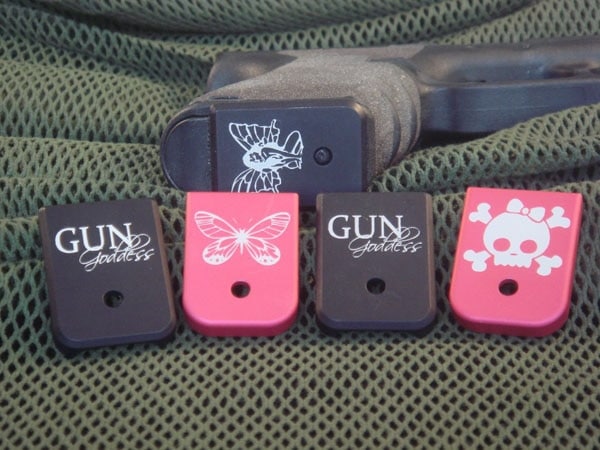 These would make great stocking stuffers.  Santa has never brought me a magazine for Christmas, much less a cool base-plate.  But they come in lots of styles, from whimsical to menacing.  These are expensive, no doubt, at $25 a pop.  But they’re original. 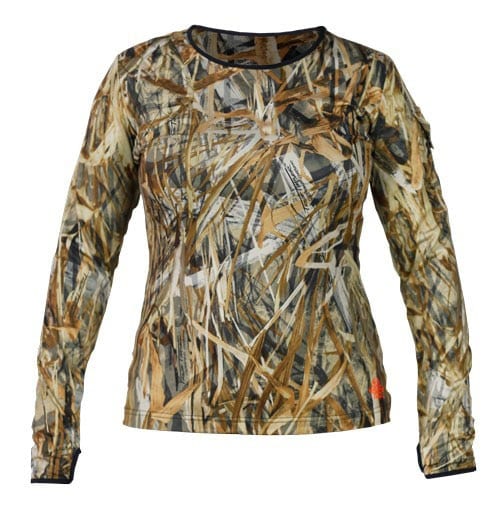 I like camouflage.  I regularly wore BDUs to school as a kid, until I realized that it wasn’t cool.  But now camo is high fashion.  And it can attract as much attention as it deflects, if not more.  This is a sharp shirt, and a nice addition to the wardrobe of a bona-fide country girl. 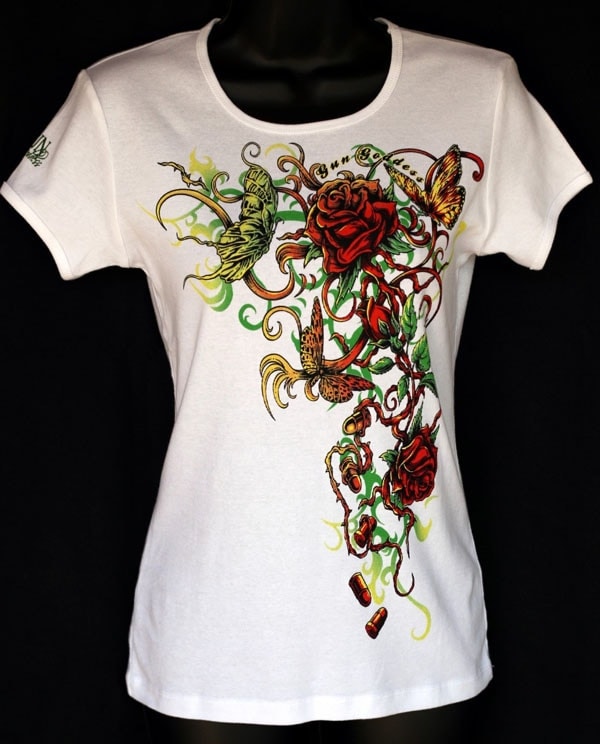 Nothing says gun like an image on a t-shirt.  Again, fashion is fickle, and you have to know someone really well to buy them clothes.  But there are so many styles available, and they’re great conversation starters. There are shirts with much more overt images.  I think the bullet motif on this one is a nice nod to gun culture, and not too confrontational.  Price?  $22. 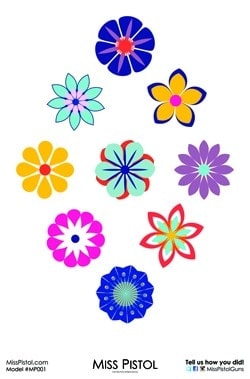 If she’s tired of shooting at zombie targets, you can offer up something a bit more floral.

I like shooting actual flowers, especially clipping off the withering buds of daffodils in the spring with a .22.  But that isn’t always popular with the gardener or the plant.

But these aren’t bad either, and offer great detail for precision shooting.  With nine individual flowers to shoot at, one target will last a while.

There is absolutely noting wrong, or terribly gendered, about your typical targets.  But these offer that extra  nod to the feminine aesthetic that could make a great gift for the right person.

And it helps to create a his-and-hers idea that could be useful in some shooting relationships. 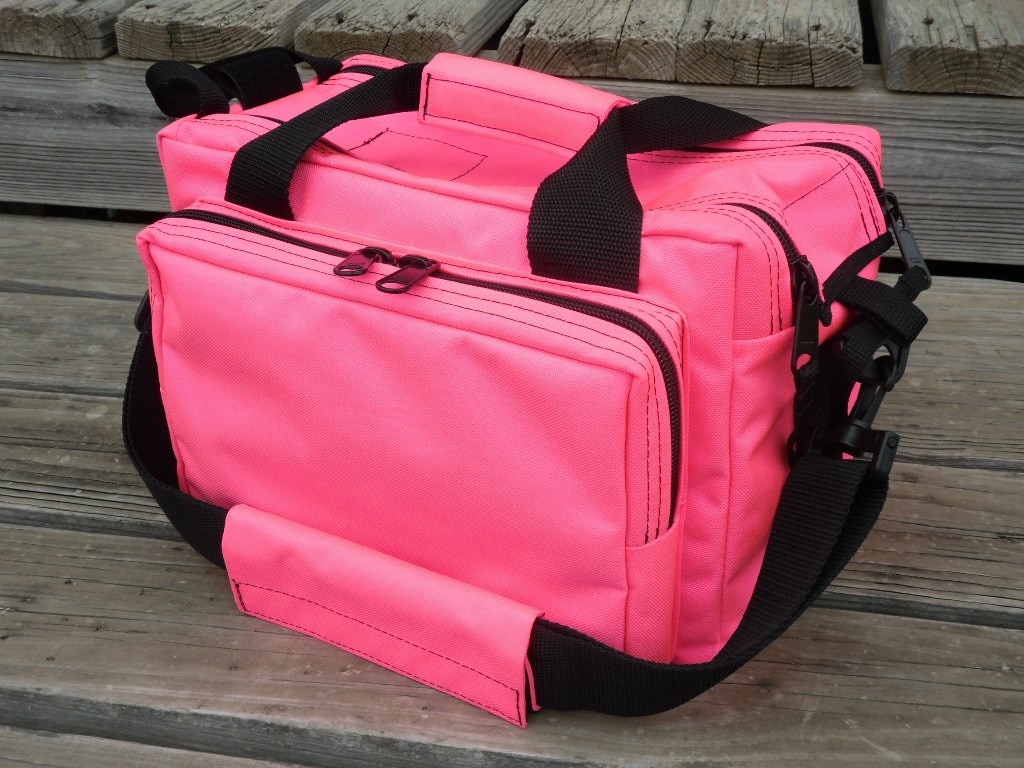 Everyone needs a range bag.  If she’s going to shoot, she’ll need a place to put all of her cool magazines, and pink Pro Ears.  And if you’re anything like me, you might feel a bit protective of your range bag.  So get her one of her own.

These normally sell for right at $100, but they are so popular that GunGodess.com appears to have trouble keeping them in stock. 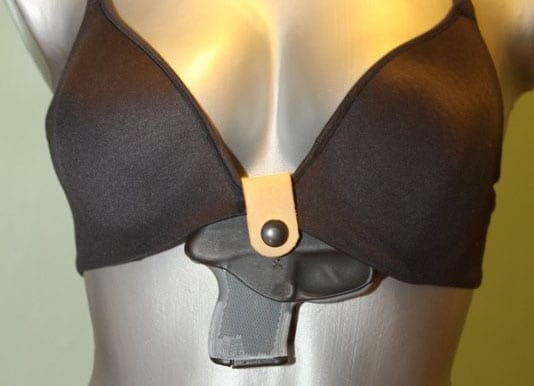 This gift might be a bit odd for your mom, but what do I know?  I know that hiding guns in unlikely places is a decent strategy.  And some women have the ability to hide a gun, or two (depending on the gun, I guess).  I think the picture says enough.  Gotta love the Kydex. 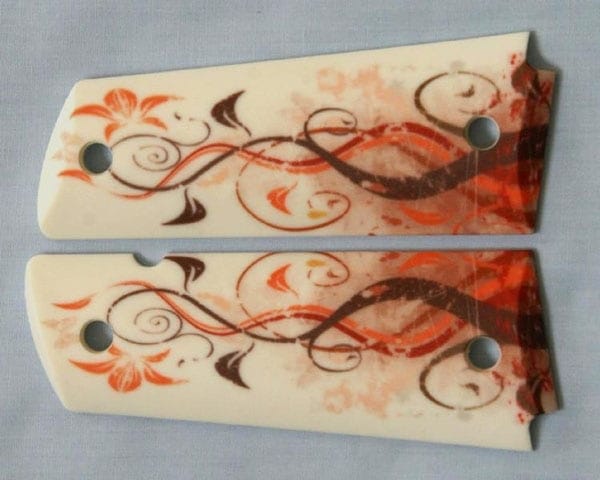 These may be, in my opinion, the most subtle and classy option I’ve covered so far.  They aren’t pink, for one.  I’m sure there are pink options out there, but these are a nice way to dress up a gun without making it garish.  They sell for $65.

There are so many options these days.  And lots of other webmistress that sell girlie gun gear.  In fact, most anyone who sells gun gear is going to have some gear and guns marketed for women.  The only thing I’d say is be selective.  And don’t assume that, because it is pink, it will speak to women.