In life often times there is the legality and then there is reality.  To be brief, the legality is how a law is ideally supposed to function.  The reality is, well, how the law is actually applied and the impact it has on citizens.

In the Bay State, for example, the law says that in order to own/possess, transport, or carry a firearm, one must obtain a firearm license or FID.  Moreover, following the passage of a 1998 gun control measure, this firearm license must be renewed every six years.

Now, local police departments that issue these licenses have a 40-day window to process the applicant’s paperwork and approve or reject his/her application.  The purpose of the window is to ensure that law-abiding residents do not have to wait an exorbitant amount of time to exercise their fundamental right to keep and bear arms.

The question then is – in reality – how often do you think that wait time exceeds 40 days?

Another question, how often do you think gun owners are left in limbo waiting for their licensing renewal, which means that until it’s renewed it is illegal for them to own or possess or transport their firearms?

James Wallace, president of the Gun Owners’ Action League of Massachusetts (GOAL), addressed the real effects of this licensing process in a Boston Herald article.

“It’s a license that’s mandated by a state that cannot supply it,” said Wallace, “It’s taking so long that people are technically illegal, and they’re scared to complain, because they’re illegal.”

“Everyone’s worried because it’s all hanging over their heads. … What happens if someone’s father has a heart attack, and emergency workers come into the house, see the gun, ask for the permit and see that it’s expired?” Wallace asked.

“We’re paying $100 for these licenses — more than double the rest of the New England states,” Wallace added. “Can you imagine the RMV running this way?”

What’s more is that even police officials have acknowledged that they’ve been derelict in their obligations to process permit applications in a timely manner.

“We’ve sent a lot of apologies to people,” Everett Police Chief Steve Mazzie told the Boston Herald. “Our process just needs to improve. We recognize it and are trying to get it to go smoother.”

One Everett man said he applied for his license in October 2011 and just received it this month.

“It’s like they had a Rolodex of excuses … vacation, or he’s out, or he’s sick, or they’re not taking calls,” said Cristian Veneziale.

In Boston, the processing time is approximately 10 weeks, according to police spokeswoman Cheryl Fiandaca.  And in Carver, they’re backlogged with about 200 applicants.

“We try to make the 40 days, but between us and the state, I don’t see anybody making it,” said Carver Chief Michael Miksch. “We only have so many people to do so much work.” 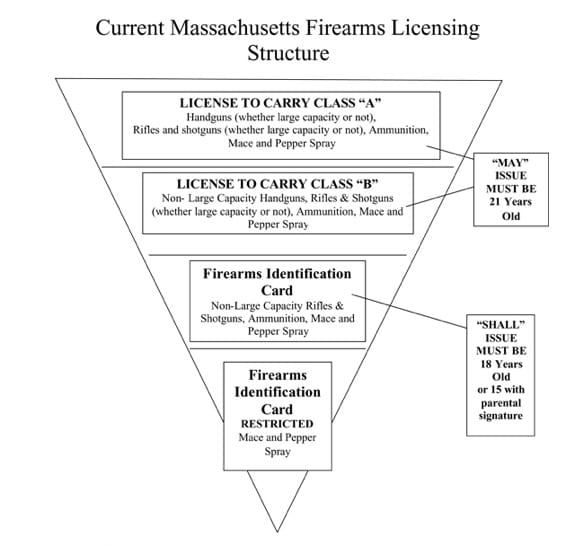 So, the law is clearly broken.  And with gun ownership on the rise in Mass., chances are, it’s only going to get worse.

Along with Wallace’s outfit, GOAL (to donate or contribute, click here), at least two state lawmakers – Rep. George Peterson Jr. (R-Grafton) and Sen. Richard Moore (D-Uxbridge) – are hoping to remove the renewal mandate and establish a lifetime permit (that, of course, can be revoked if someone breaks the law).

However, until that happens, Bay Staters will be stuck with the status quo – which is an ugly reality.

“It’s frustrating that we create the licensing system, and we can’t turn it around in three months,” Rep. Peterson told the Herald. “Shame on us.”