Last December, I asked for a Webley-Fosbery Automatic Revolver.  I know it was an optimistic request, but I had been very good.  I thought you and your elves could swing it.  But no.  What did I get?  Zilch.  This years request is a bit more pragmatic, so maybe I stand a chance. 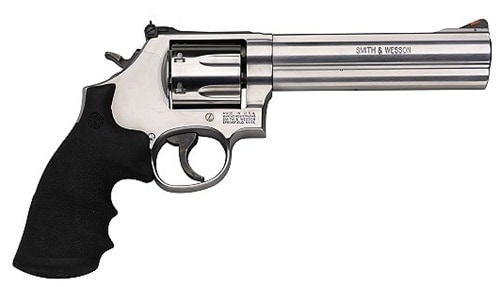 This one would do.

I also like the 686 Plus, which adds an extra round to the traditional six shot model.  That’s so if you get into a Hollywood style shoot out with a bad guy who is counting rounds, he’ll think you’re empty and jump up after the sixth shot.  Then he’ll start delivering his monolgue about how he intends to take over the world, only to realize his error in judgement when the cylinder on the 686 Plus makes one more impossible rotation.

If you check your list and find that I’ve been really really good, you could pick up a TALO 3-5-7.  This will save your elves some wear and tear.  TALO takes good guns and makes them better.  Some of there design ideas are subtle.  Other are more cosmetic.  But I’ve yet to see a TALO that I didn’t like.

This one is better.

The TALO 3-5-7 is the holy grail of the gold standard.  Not only is it a seven shot six-shooter, but there is an extra inch on the barrel.  And the grips!  Take off you mittens and feel the wood.  Most 686s have molded rubber grips, but the TALO has wooden grips with the same shape and finger grooves as the more pedestrian rubber.