Give the Gift of Tradition: Ka-Bar Fighting Knives

We at Guns.com typically concern ourselves with all things guns.  But today we’re talking about a distant cousin of the gun, and a weapon designed to used when the failed, or when a gun might attract too much attention.

The Ka-Bar. There is no other knife that is this iconic.

The Bowie is an iconic knife, though the Bowie’s origins are murky and there are thousands of variations on the theme.  The Swiss Army knife comes to mind, but that, too, is variable.  The Ka-Bar, with its sixty year history of active duty, stands alone. It is, if you’ll allow me the comparison, the 1911 of knives.  And it makes a great stocking stuffer. 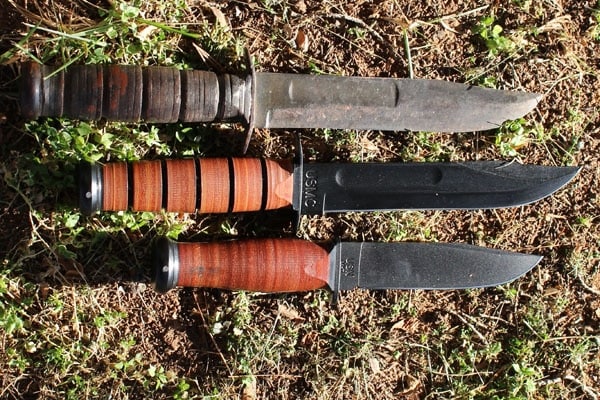 The name Ka-Bar hasn’t always stood for the iconic USMC Fighting Utility knife, or Union Cutlery (the company we now know as Ka-Bar).  It is rumored to be an acronym for “killed a bear,” which was scrawled (“ka-bar”) on a note sent to the Union Cutlery company back in the 1920s. 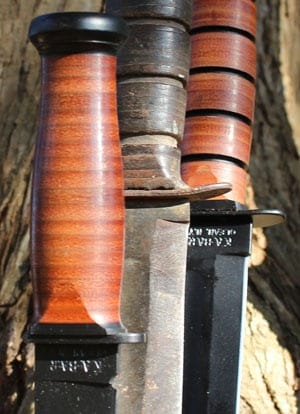 These leather handles wear well provided you oil them from time to time.

Rumor has it that an unlucky (and marginally literate) man had his Union Cutlery knife bitten in half by a bear, but was still able to save himself (and kill the bear) with what was left of the well built knife.  In the spirit of this survivor, Union Cutlery began stamping Ka-Bar onto their knives.

Skip ahead a bit.  As the fighting escalated in the Pacific in 1942, Marines asked for a better knife.  Some had been issued brass handled fighting knives leftover from the last war.  But their blades were brittle, the brass knuckle handles limited how the knife could be held, and production of these knives were resource intensive.  Many of the Marines were carrying their own knives already, and most of these were traditional hunting knives with stacked leather washer handles.

The Ka-Bar design came from this.  The original prototype was built by Camillus Cutlery, and designated The Mark 2 (one of a few names the new knife would get).  It standardized  what was already common.  The seven inch, clip point blades were made from 1095 carbon steel (which holds an edge well without being too brittle).  The handles were leather washers stacked up on the knife’s tang, and the hilt was pinned (or be peened) in place.  The knife had a composite sheath, or a leather sheath. 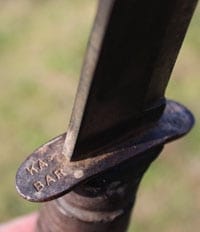 The Ka-Bar stamp on a Union Cutlery “Ka-Bar.”

Contracts were filled by several companies, but Union Cutlery (now Ka-Bar) stamped Ka-Bar in their knives’ ricassos.  Union Cutlery made close to a million of them.  And, in one of those weird twists of fate, the knife became known as the Ka-Bar.

At first, the knives were issued to Marines who were not issued bayonets.  But the knife was so useful, for both fighting and general tasks, that almost all Marines had them by the end of the war.

The name itself was so synonymous with the quality of one specific knife that the company who made it adopted the old acronym for their company’s moniker.  What we now know as Ka-Bar used to be the Union Cutlery Company.

The new knives are no less tough.  There are stronger knives.  There are bigger, thicker knives.  But the old Mark 2 model USMC Fighting Utility Knife blends the perfect mix of functionality and value.  Remember this had to be mass produced at a time when steel was scarce (thus the narrow tang inside the handle).  They can be, and were, broken.  But looking at how many of them are still around should attest to their incredible quality. 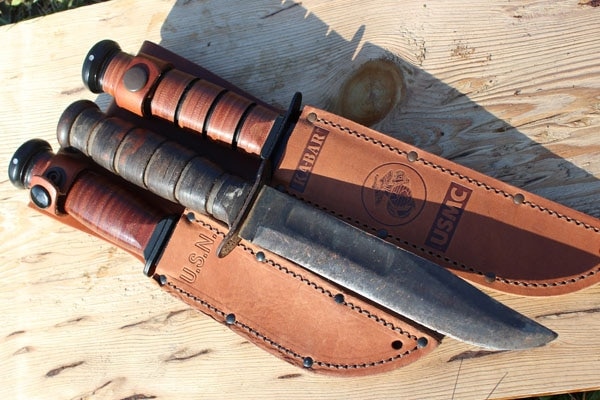 The one here has been passed down in my family.  It was issued in 1943 and saw service in the Pacific. It is in remarkable shape for its age, and is still quite sharp.  It was used as a general utility knife until the late 1990s, when it was passed down to my father. 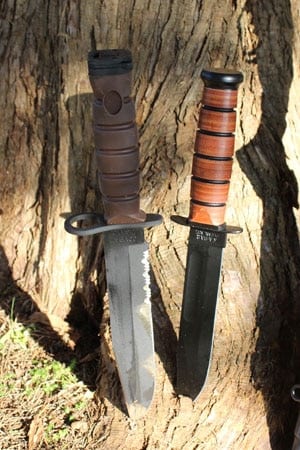 The old Ka-Bars haven’t been forgotten, either.  There are many companies making the pattern now, and Ka-Bar has updated the design several times (changing materials, mostly, but also size and blade shape).

Ontario Knife Company is now making the OKC3S for the Marines, and though it is a bayonet, the homage to the Ka-Bar pattern is clear.

The new Ka-Bars are just as well built as the old ones.  They make great hunting and camp knives.  Many of them still see service, though they are frequently wrapped up in polymer sheaths with MOLLE attachments.

These knives make great gifts.  As a kid, I was given several knives, but never a Ka-Bar.  I had to wait for mine to be passed down.  But they’re tools, too.  And I missed out on that part, until now.  This Mark 1 USN is my go-to belt knife.  This new USMC will go with me into the woods.

The prices vary depending on the model.  A basic Ka-Bar sells for somewhere close to $70.  The Mark 1 USN is less.  The new models go up from there.