With his back against the wall, it seems like Illinois Gov. Pat Quinn really has no choice but to submit to the inevitable: that Illinois lawmakers will pass a bill in the 2013 legislative session that legalizes concealed carry.

Today, the Gov.’s remarks seem to reflect a resignation to that inevitability.

In a statement, the Gov. said that he would work with the General Assembly on a concealed carry bill provided that the law includes “reasonable restrictions,” such as prohibiting the mentally ill from carrying concealed firearms (something that’s already illegal under federal law).

Gov. Quinn also said that he would leave the decision of whether to appeal the 7th U.S. Circuit Court of Appeals ruling, which struck down the statewide ban on concealed carry on Tuesday, to Attorney General Lisa Madigan.

Now, one doesn’t want to read too much into the Gov.’s remarks, but let’s remember where this man stood on the issue just a few days ago, prior to the ruling.

In August, through his amendatory veto power, Quinn hijacked a moderately pro-gun bill that would have allowed Illinois residents to purchase ammo online from in-state suppliers (under current law, gun owners can only buy from out-of-state suppliers) and turned it into a ban on “assault” rifles and high-capacity magazines.

Thankfully, last month, by an overwhelming majority the state Senate rejected Quinn’s modified bill.  However, Quinn was undaunted by the vote and did not seem to budge from his staunchly pro-gun control position.

As it relates to concealed carry, Quinn had – in the past – repeatedly vowed to veto any CCW bill that landed on his desk.  Consider his comments from 2011 when a concealed carry bill was hanging in the balance:

“The concept of concealed, loaded hand guns in the possession of private citizens does not enhance public safety, on the contrary it increases danger for everyday people as they go about their lives,” Quinn told according to the Chicago Tribune.

“I don’t think we’re in the business of trying to increase danger to the people of Illinois. We want to work with our law enforcement and prevent bad things from happening,” Quinn continued.  “I think the passage of this law by the General Assembly would be most unwise and they should know where they governor stands [i.e. he’d veto it] and where the people stand.” 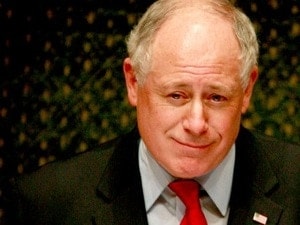 Again, that was prior to the ruling.  So, now, Quinn is clearly singing a different tune.  That is, one of conciliation.

Moving forward it looks as though he is willing to work with pro-gun lawmakers to draft a CCW bill.  More tellingly, perhaps, is that he is not going to (at least not publicly) push A.G. Madigan to appeal the ruling.

Given his background as a hardened, gun-control advocate, one would presume that he would be the first person in line demanding an appeal.  But, evidently he’s not – which raises the question, has he accepted defeat?

Though, maybe it’s not defeat he’s accepted per se, but a realization that he no longer has choice in the matter or any leverage in negotiating, as NRA lobbyist Todd Vandermyde suggested.

“It’s over for them. They have no stroke in this game, they have no negotiating power,” Vandermyde told the Associated Press. “When you start drawing circles around all those places – day care centers, schools and parks – that’s a ban and they don’t get a ban. They lost.”

Whether Quinn is secretly planning a last-ditch effort to fight against a concealed carry bill behind the scenes or if he really has genuinely accepted defeat doesn’t really change what’s going to happen: Illinoisans will be carrying concealed in 2013.  That is inevitable.  And resistance – be it from the A.G. or the Gov. or Chicago Mayor Rahm Emanuel – now seems futile.