Ares Defense is unveiling their latest gun, the MCR or Mission-Configurable Rifle. This is a commercial variant of their AR-based light machine gun that feeds from both standard magazines as well as linked ammo.

The Ares Defense MCR is extremely lightweight compared to most belt-fed guns, depending on the configuration, weighing in around eight or nine pounds, and as little as 7.5 pounds with the shortest barrel. This makes it a particularly maneuverable and easy-to-wield rifle, especially when set up to use box magazines.

In addition to being semi-automatic, instead of select-fire, the MCR has a new sight system, now with low-profile flip-up backup iron sights.

Even though this is a commercial version, the bolt and short-stroke tappet gas piston system are unchanged from the military/law enforcement AMG, meaning it can withstand extremely large volumes of fire in rapid strings.

“Our premium bolts are precision machined in-house from a proprietary aerospace alloy and heat treated to exacting specifications. Our proprietary 6-lug design provides more shear strength than traditional AR type bolts, and also features tangential radii at the tips and root of each lug to minimize the stresses that cause premature failures in the ‘square-cut’ legacy design. The MCR/Shrike 5.56 bolt design was developed for sustained fire applications and is considered overbuilt by most rifle standards, providing a level of safety that is absent in most other rifle designs.” 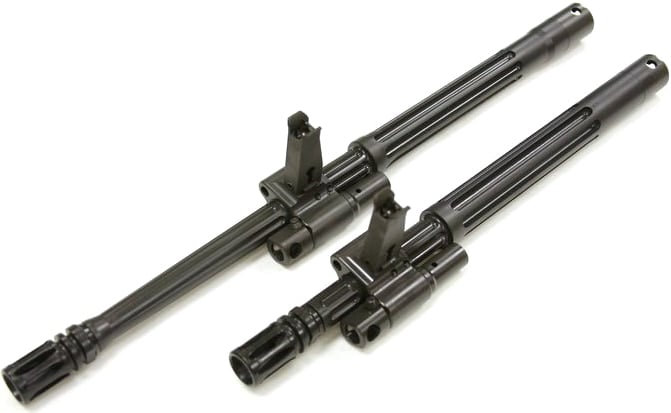 Like the AMG—Assault Machine Gun—the MCR incorporates Ares’ quick-change barrel system. And it is very quick; a skilled hand can swap barrels in less than five seconds. The MCR also maintains the self-adjusting gas system that can be tweaked to completely control dwell times to minimize felt recoil.

“Our business specializes in developing premium rifles that can be readily adapted for a variety of missions and uses,” said Geoffrey Herring, President of Ares Defense. “Our research and development team has spent many hours refining the MCR design to ensure that it meets and exceeds the rigid standards and expectations of those in the gun industry who expect nothing but the best. Quality, reliability, safety and performance are our top priorities and we look forward to hearing users’ feedback from the field after using the ARES-15 MCR.”

With the announcement of the MCR comes some other cool news. In addition to having multiple barrel length options, 12-, 16- and 20-inches, the MCR will soon get caliber conversion kits, too. Ares plans to roll out 5.45- and 7.62x39mm kits for burning through surplus as well as 6.5 Grendel and 6.8 SPC II for long-range shooting.

While some of the engineering that goes into the MCR is going to be lost on a semi-automatic rifle, its flexibility in other areas makes it an interesting gun for someone who just doesn’t want an AR like everyone else has. In addition to making an interesting conversation piece, this thing is just begging for a drop-in auto sear.

And from a law-enforcement perspective, the MCR makes a lot of sense for departments that don’t allow select-fire guns. The ability to configure one rifle for any type of confrontation has loads of appeal.

That being said, this is an amazing and extremely flexible rifle, and some things you can’t do cheaply. The MCR is one of those things.

There is one low-cost option to get your hands on an MCR: right now Ares Defense is holding a drawing on their Facebook page. One lucky winner will wind up the no doubt excruciatingly-happy owner of a Mission-Configurable Rifle.