The first round of Izhmash-led trials for the AK-12 have been completed, highlighting a handful of flaws and shortcomings in the design. This shouldn’t be taken to mean that the AK-12 is a broken platform, just that the design needs revision before it goes into mass production.

Dmitry Semizorov, head of the Tochmash state arms firm, said “[The AK-12] has shown up a range of problems” and “a series of flaws.” Semizorov did not disclose any details as to what, exactly, needs to be addressed, but he did say all of the flaws were fixable.

The trials process for the AK-12 is almost complete, according to Semizorov—80 percent finished—and should be wrapped up by the end of this month. The purpose of these trials, naturally, is to identify and rat out any potential shortcomings in the design. The AK-12 is scheduled to undergo additional evaluation with the Russian military, with state-led trials to run from January through June or July of 2013.

The AK-12 is the most significant departure from the original AK-47 designed by Mikhail Kalashnikov, although it still draws from his rifle in a few ways.

If all goes according to plan, the AK-12 will enter production before the end of next year. Although it could take some time before it becomes available on the public market, Izhmash has some other promising additions to their commercial catalog that will make every Russian gun fan grin.

First and foremost is the surprise announcement that Izhmash will be developing a commercial variant of the AK-107. This 5.45x39mm rifle, and its 5.56 NATO counterpart, the AK-108, was developed in the mid-’90s as a possible replacement of the Cold War-era AK-pattern rifles in service with the Russian military.

The AK-107/108 has a pair of op rods, one running between the gas piston and bolt carrier that travels rearward to cycle the rifle, with other connected to the main op rod by a fixed cog that travels forward, acting as a counter-weight. The effect is a rifle where the recoiling mass moves in opposite directions, negating most of the recoil transferred to the shooter. This is called the Balanced Automatic Recoil System, or BARS.

It’s an ingenious design that proved to be too expensive to enter widespread military service, although it supposedly has been issued to Russian special forces.

While it proved cost-ineffective as a service rifle, that’s simply not the case with the open market, where gun enthusiasts are more than willing to spend more to get a hold of this innovative and exotic rifle. It’s a smart move on the part of Izhmash who has been struggling financially. 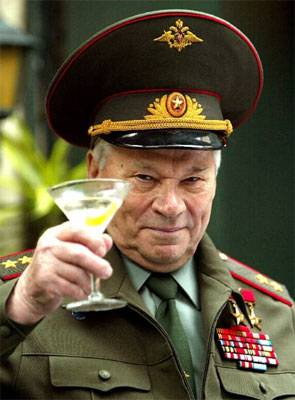 In addition to the AK-107 getting readied for the general public, The Firearm Blog reports that Izhmash will readying a Saiga-brand 9mm for the commercial market as well. A 9mm AK pistol or carbine or both would be extremely popular here in the US.

Lastly, Russian president Vladimir Putin has given the thumbs up for the merger of Izhmash and Izhevsk arms manufacturers. Izhmash is the famous manufacturer of AK-pattern rifles and Saiga brand firearms, where Izhevsk makes Baikal and Makarov guns. The merged companies will operate under the Kalashnikov brand, which is just tops.

While 2012 was a troublesome and mournful year for Russian gun fans, 2013 is already shaping up to be completely different. As gun demand continues to outstrip supply, these Kalashnikovs will have no problems finding good homes all across America.