When metallic cartridges replaced cap and ball revolvers in the 1870s, thousands of gently used wheelguns became obsolete almost overnight. But like so many once innovative products with loyal fan followings, many frugal pistoleros weren’t ready to make the jump from old to new and for them the so-called cartridge conversions were good enough. 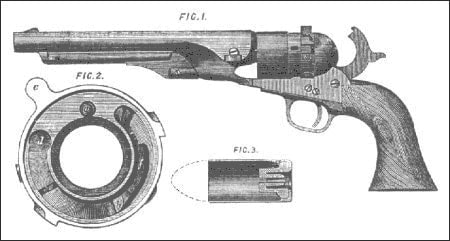 In 1870, Smith and Wesson introduced their newfangled Model 3 revolver and when compared side-by-side to the cap and ball revolvers of the day, this gun was simply revolutionary.

The chief innovation was that this new wheelgun could be rapidly loaded and reloaded with large caliber metallic cartridges. Throughout the 1860s Smith had marketed smaller caliber cartridge guns and in fact held the patent on the entire concept, but the large caliber Model 3 was a big deal. One of these new Smiths could be loaded in seconds with true blue manstoppers, whereas a Colt 1860, introduced just a decade before, took minutes to load safely. 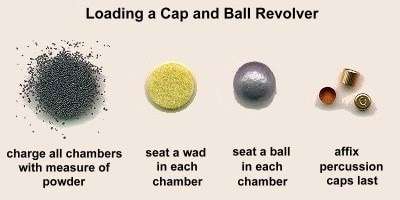 In these cap and ball Colts, one had to pour powder, seat lead balls, seal cylinders, and set primer percussion caps. If not done properly a life and/or limb threatening chain fire in which all six cylinders could ignite at once, could result. In addition, there was really only one way to effectively unload one—and that was by firing.  Overnight it seemed, the Model 3 solved all of the universal complaints shooters had about early handguns not unlike how DVDs almost immediately eclipsed VHS. This cartridge firing Smith was an instant hit with gunfighters and that included Wyatt Earp, Jesse James, and the US Army. Within just a couple years, Colt had to respond with the cartridge-firing 1873 model Single Action Army and the days of cap and ball revolvers were over.

The thing was, hundreds of thousands of relatively new cap, ball revolvers were still out there…, and many of their owners often could not afford the shiny new $15 Smith Model 3 or Colt SAA. This development led to a strange craze in affordable conversions of obsolete but still functional cap guns to newer cartridge guns.

The Hartford, Connecticut firm had produced nearly a half million (more than 200,000 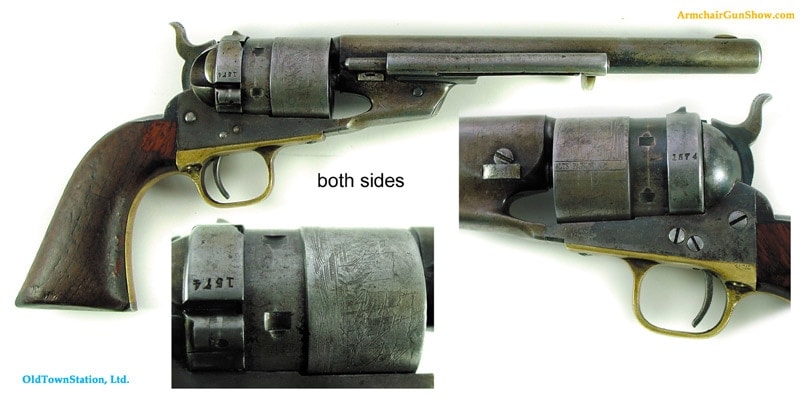 .44-caliber Colt Army 1860s, 28,000 .36 caliber 1862 Police, and another 250,000 .36-caliber 1851 Navy models) cap and ball revolvers before 1873. It was almost inevitable that the majority of the efforts into factory conversions of these guns should be done in the same plant. Throughout the 1870s, no less than four different series of designs were used by the factory that replaced the cap and ball cylinder with one for cartridges. This included the Richards 12-Stop, Richards 2nd Model, Richards-Mason, and Thuer conversions. Common market value for these guns was about $5 in the 1880s.

Colt marketed these conversions as being available to current Colt owners (for a fee) to convert their already owned revolvers to shoot cartridges. This could be done for a few dollars whereas a new Smith would cost the equivalent of a month’s salary. 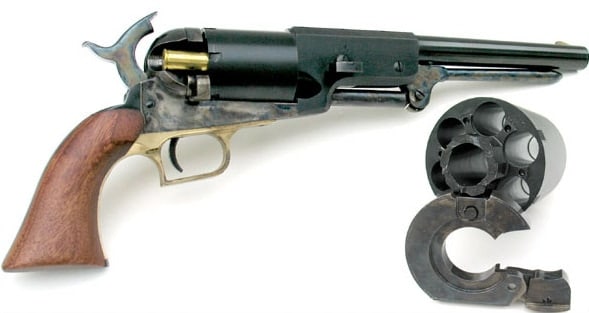 The conversion process generally involved taking the old revolver and cutting off the back of the muzzleloading cylinder, replacing it with a conversion ring that would accept the new sealed breechloading cartridges. The underbarrel rammer, not needed to pack balls and powder anymore, was replaced with an ejector rod to push the spent cartridge brass backwards out of the cylinder once fired. A series of new production cylinders, manufactured and added to old stocks of existing Colt parts, was also used. Overall fewer than 25,000 new-built and converted models were made by the factory from 1871-1880.

Interestingly, Remington arms cartridge conversion efforts in 1868 predated not only Colt’s conversions, but also the revolutionary Smith and Wesson Model 3 itself, with a .46- 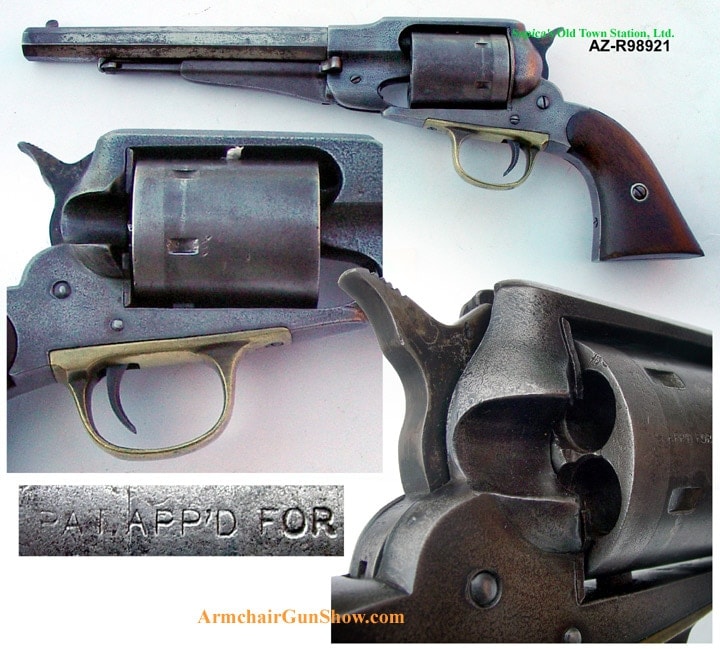 caliber rimfire cartridge conversion of their existing cap and ball revolvers. Since S&W held a patent on Rollin White’s design of a bored-through revolver cylinder at the time (what we know today as standard on all revolvers), Remington paid a small royalty for this privilege to Smith to produce these cylinders.

Even though Remington had manufactured some 130,000 Model 1858 New Army style revolvers, only 4,575 were converted. These replaced the 6-shot cap and ball cylinder with a 5-shot .46-caliber cartridge version for $3.36 apiece. These are often referred to as Remington-Kittredge models after the sporting goods company that sold most of them. 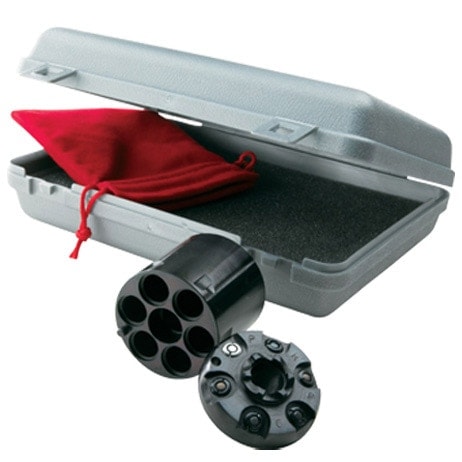 performed by small gunsmiths and farriers most of who jumped enthusiastically on the cartridge bandwagon and made a few extra dollars on the side performing their own brand of conversion work. These homebuilds do tend to bring far less than factory conversions such as the Colt Richards 12-Stop, Remington-Kittredge, and others. Colts with the Richards Conversion are easily recognized by the ejector rod extending past the back of the ejector rod housing about one inch and are one of the most encountered of the third party conversions. 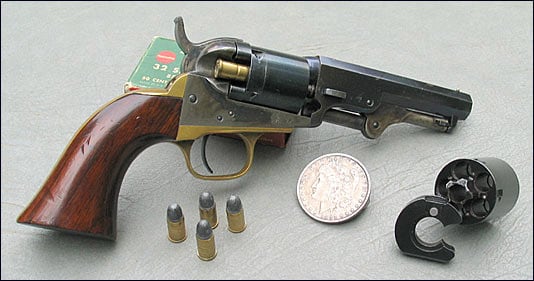 The prices on 19th century cartridge conversions are all over the place with guns selling for $900-$8000 or more. By and large, they are considered non-shootable by collectors both due to the possibility of destruction while firing (especially with non-factory conversions) and because of the fact that no stable ammunition (usually marked Breechloading Army Revolver) have been made for them in over a century. However, just because you can’t shoot them doesn’t mean they are not highly prized as collector’s pieces. They are an important gap in handgun history between cap and ball revolvers and true cartridge revolvers. Their appearance in such films as the Good the Bad and the Ugly, and the Quick and the Dead have cemented them in gun lore.

Oddly though, it seems today there are more people set up to convert black powder revolvers to cartridge guns than there ever was in the 1870s. Kirst Konvertor, Taylor and Company, and Howell all exist to produce modern cartridge conversion kits for cap and ball revolvers. New all-steel revolvers such as the Ruger Old Army (itself an updated version of the 1858-series Remington New Army), and many of the imported Italian Pietta and Uberti replica revolvers, take these converted cylinders very well.

Available in more modern rounds such as .22LR, 45 Long Colt, .45 Schofield, and 38 Special, guns like these are a big hit with SASS and Cowboy shooting enthusiasts. However, these cannot be used with brass-framed revolvers and their use with low velocity (less than 850 fps) blackpowder cowboy loads only is usually the number one caveat to these cylinders. They typically run $150-$400, which of course does not include the price of your revolver.

As they say, everything old is new again.