In the early morning hours of Tuesday, Dec. 4, James Gerow awoke to unusual sounds in his home in Springtown, Texas.  The Gerow family had been asleep when Christopher Lance Moore entered the house, and then the Gerow’s bedroom.

Gerow knew something was amiss when he heard a door open in the middle of the night.  What Christopher Lance Moore, the alleged burglar, was doing in the house is still a mystery.  When Moore found the Gerows awake in the bedroom, Moore fled.  But Gerow grabbed a handgun and chased him outside, demanding to know who Moore was and what he was doing in his house. 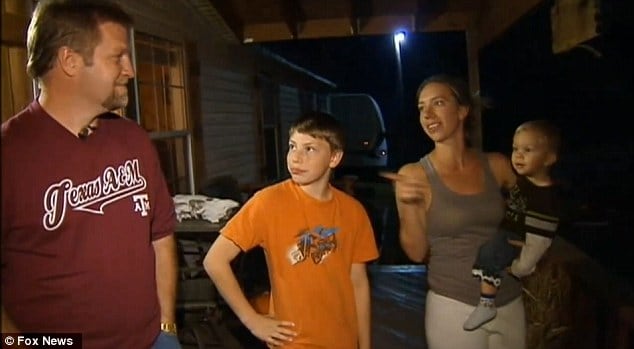 Back inside the house, Gerow’s wife dialed 911.  The Dallas News reports that Gerow caught Moore and demanded to know why he had broken into his house. Moore’s response? “Just unlucky, I guess.”

Unlucky indeed.  Moore was certainly behaving strangely.  Not only had Moore broken into Gerow’s house, he’d parked his SUV in the Gerows’ driveway like he lived there.  Gerow, still holding the gun on Moore , managed to take away the keys to his get-away-ride.  Moore, without his keys, climbed into his SUV and locked all of the doors.

This is where things get a bit strange.  Moore, locked in his own vehicle, felt threatened enough to call 911.  It is better than the alternative, I guess, which Moore must have thought meant getting shot by a justifiably irate homeowner.

Gerow, concerned that Moore might have a spare set of keys inside the vehicle, decided he would block Moore’s SUV in with his own truck.  So while he moved the truck, he left his 13 year old son (who had a 12 gauge) in charge of Moore.

“If he’d got out,” Gerow told a reporter, “I’d have expected him [his step-son] to shoot him.”

And the 911 calls (both of them) worked.  Moore was still on the phone with the dispatchers when the cops arrived to give him a safe escort to the pokey.  No charges have been filed against any of the Gerows.