I’m a big proponent of scatter guns for home defense.  As such, I also support the addition of a light.  While it is feasible to hold a light and a handgun (and sometimes preferable to do so), I find it much more complicated use a shotgun and a flashlight, unless the two are combined.  And mounting lights on shotguns is easy and the lights are reliable.

And that’s what we’re looking at here.  Flashlights to mount on shotguns.  There are two basic options–three if you count duct tape.  We have two Mossbergs, a 500 and a 590A1, and three lights.

The SureFire Scout Light is the most utilitarian light we have in for review, as it mounts on a picatinny rail.  The good news is that you can mount it on a shotgun or a rifle (or a pistol with a really long barrel).  The mount is a lever with a button clasp that holds perfectly.  Thanks to this clasp, the Scout Light is the easiest light to put on and remove.

The switch on the Scout Light is a simple pressure pad that provides momentary on and off capability.  That’s it.  There is no constant on or strobe functions with the pressure pad, though the grip a shooter should maintain on a forend is enough to keep the light on, if that’s what you are after.

In shooting, we found that the light is incredibly bright, and easy to use.  Still, the movement of the slide on a pump shotgun and the ensuing recoil from the shot tended to cause a shooters to release the pressure on the pad.  So there is darkness between the shots.   But this can be overcome with practice and a firm grip. 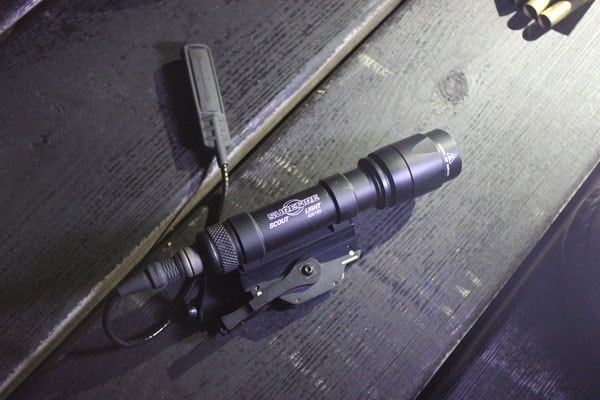 The price tag on the Scout Light is steep: $525.  This is expensive, but the light is versatile and built to such a ridiculous standard of craftsmanship.  If I were serving in any sort of combat or tactical unit, this would be my first choice.  This light and its mount are built to serve.  The light puts out 200 lumens  and will run for two hours before a battery change is needed.

You also need a forend with a bit of rail.  We used the Talon Forend from ATI and it worked perfectly.

This unimaginatively named light was our favorite.  The design of this replacement forend makes it really useful.  While the Scout Light hangs off of the forend, and has a switch pad that must be affixed to the weapon, the Forend Light incorporates the light into the grip in a forward mounted, and slightly lowered housing.

This gives you a positive stop on the end of the forend, especially useful on short barreled shotguns.  It will help insure your hand doesn’t ride forward in front of the barrel.  If there is a slight disadvantage of this design, it would be that the light protrudes a bit, which means that it could, possibly, hang up on a strap (or a seat-belt). 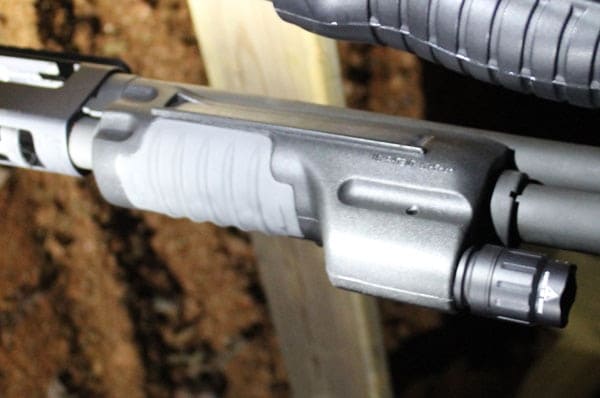 But the light was the brightest of the tree we reviewed, and the light was the easiest to use.  There are two switches.  On the thumb side (for righties), there is a toggle switch.  On/off.  On the finger side is a full length pressure pad for momentary on, or pulsing.  And it stayed on.  For fast repeat shots that don’t require darkness as cover, this is the perfect option.

The price tag is reasonable: $410.  Though this light is supposed to put out just 100 lumens, it appeared much brighter.  A 200 lumen version is available.

When Mossberg sent me a 500 to review, it had a light built into the forend.  Their 500 Special Purpose Tactical Light Forend is an incredible gun, and doesn’t require any modification.

There are two things worth mentioning.  The light on L3’s forend has an on/off switch that enables the light.  Then it has on/off toggle switches for actually making the light shine.  It has momentary on, constant on, and strobe functions.  These options provide more functionality, but have the potential to create confusion.  Practice can create proficiency. 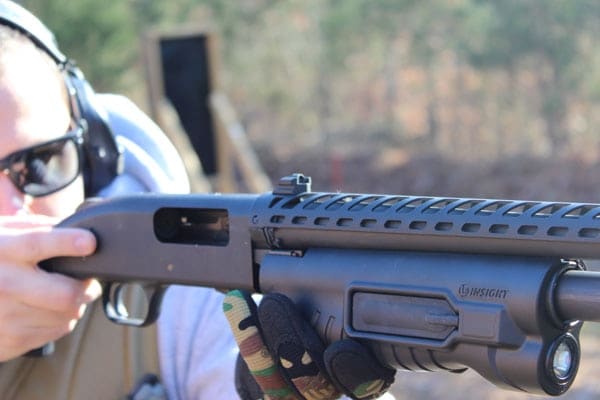 While the light was not as bright as either of the other two, it certainly wasn’t dim.  And I’ve been working with this gun for more than six months now (so it may simply be an issue of battery life).

There are two features that make the L3 Forend ideal.  The first is the strobe feature.  It is 1970’s disco bright, and even more disorienting.  The second is the way the light and batteries are built into the forend itself.  There is nothing hanging off.  This makes the forend fatter, but less likely to catch on anything.  The light is flush with the front of the forend.

The Mossberg with the light has an MSRP of $575.  The light alone sells for $240.  The price is so much lower that I have to comment on value.  If cost is an issue, this may be the perfect choice.

Both SureFire and L3 are rock solid companies.  My ultimate recommendation is simple enough.  What do you want to light to do, exactly?

If you might put it on an AR or a shotgun, than versatility is the key, and you need a Scout Light.  If you are looking for a forend that is easy use, and ideally suited for short barreled shotguns, than the Surefire Forend is perfect.  If you want the blinding strobe and a completely streamlined  forend, than the L3 is the one. 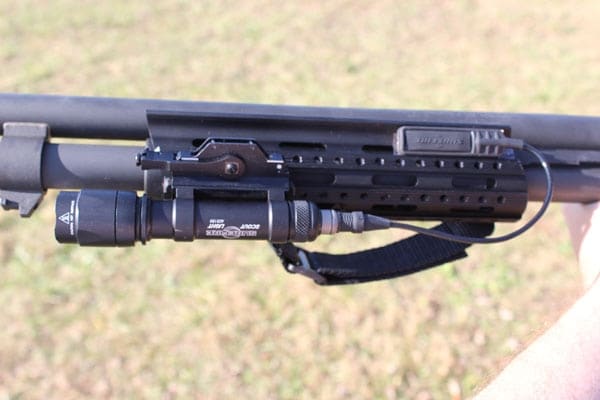 Now that I think about it, I should have duct taped a light to the Mossberg, if only for comparison.  Despite the obvious impermanence, it works surprisingly well.  But these lights are clearly better.  And they make a shotgun the ideal tool, day or night.

I’d again like to thank Bob Lawman at Firearms Novelity for the use of the range.  Lawman was most accommodating of our after hours request and spent a couple of hours with us in a cold December rain while we tested these lights.