The Ithaca Gun Company is making 1911s, again. The past few years has seen resurgence in the Iconic gun maker.  They are now located in Upper Sandusky, Ohio, and are manufacturing some of the best shotguns the company has ever made, which is what they’re known for, but like most other gun manufactures today they are getting back into the 1911 market, too.

The new Ithaca 1911 is a far cry from the ones they made during WWII.  These are almost custom pistols with beavertail grip safeties, skeletonized hammers and triggers, stainless steel two-piece guide rods and other hand fitted parts only found on higher end pistols chambered in .45 Auto.

The first go around

The Ithaca Gun Company is known for the classic Model 37. But like many American manufactures (not just gun makers) during the 1940s, they filled government contracts.  Ithaca made shotguns, M-3 “grease guns” and 1911A1s for the military during the war.  That was the extent of their handgun experience up until the introduction of the new 1911 about two years ago.

Ithaca’s Chief Operating Officer Mike Farrell explained to Guns.com how the company is trying to be different. He said, “There are a lot of 1911s out there and, other than buying a Wilson Combat, an Ed Brown or the like, most shooters are picking up ones made by Colt, or the new Remington and Ruger.  Then to get them to competition level, they drop another thousand plus bucks and have them worked over.  We offer that level right from the box.”

He added that it takes one worker a full day to build a single Ithaca 1911 in the Ohio plant, so right now Ithaca is capable of making about 500 a year, but they’re about to increase production. 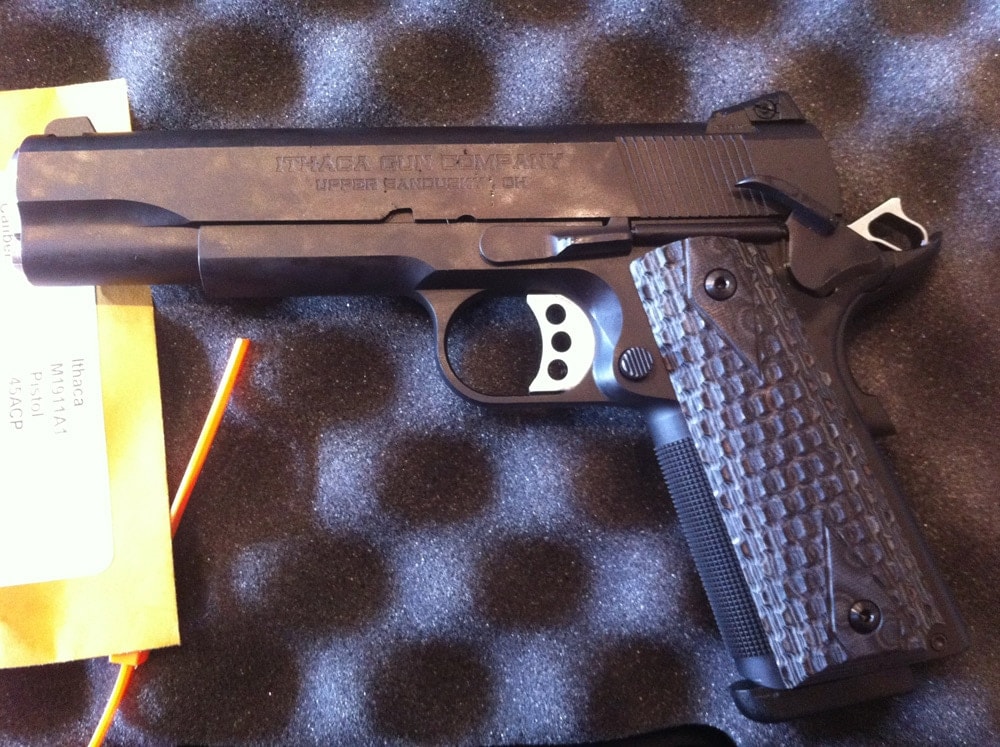 The test gun has been modified. Instead of wooden grips, it has G10 grips and ambidextrous controls. According to the invoice, these modifications cost about $150 more than MSRP.

A lot of the parts on these are hand fitted to the gun, and the slide and frame are hand lapped to help ensure a tight fit and better accuracy than a typical factory gun.

To support that, the review sample is tight and had no rattle on it at all.

The current Ithaca 1911s are tricked out.  The frame has the standard 1911A1 cuts behind the trigger but has the flat mainspring housing of a regular 1911.  The front and rear of the grip are checkered with 22 lines per inch, which is very nicely executed. The whole thing felt very nice in my hands.

They also sport match grade stainless steel barrels and two piece stainless guide rods.  The hammers and triggers are both lightened or skeletonized. The triggers also have an over travel adjustment.

The slides are cut in the Colt Gold Cup style; they have a flat top.  The rear slide serrations are good and deep and provide a good grip and are not over-the- top like some of the custom guns out there. They come with either Bomar style target or Novak style combat sights. The ejection ports are lowered and flared. The pistol I was sent for review has all of the above with a few extras.  It has the Novak style combat sights that are made by Kensight. The grips are made from G10 with a very aggressive texture.  These grips have large checkering that is more like sharp knobs.  They do offer a good grip but my hand was a little fatigued and sore after a hundred rounds.  In my opinion these would be great carry/combat grips but not something I would want on a range gun. And the other option on the review pistol was the ambidextrous thumb safety.

I love shooting 1911s and this one was no exception.  I mostly ran 230-grain Winchester ball through it.  I also shot some Hornady Critical Defense and some Speer Gold Dot both of which fed without problems and all gave around 3-3.5 inch groups at 25 yards.  I used a Weaver stance while shooting groups and changed around my grip and stance at other times.

The trigger break on the Ithaca is good and crisp at around 4.5 pounds, but I did notice a little bit of grit in the take up – not much though.

The recoil is pure 1911, meaning very manageable if you have done your time behind the trigger. I found that the combat sights came back on target fast for the next shot.

Extraction was great.  Spent brass was sent about 4 or 5 feet to the shooters four o’clock.

The review gun seemed to be sighted in a little low.  I took a friend with me to the range and he had the same results.  It could be it was sighted in at further than we were shooting.  Most of our shots were from 25 feet and from about 25 yards.  I was able to get a pretty good 3-inch group from 25 yards with the Winchester ball.  These were a couple of inches below the ten ring. I have no doubt this gun will shoot better than I can.

Overall this is a very nicely made and good shooting pistol.  The fit and finish it great.  Many of the internal parts have the serial number on them which shows they were hand fitted to this gun.  It performed flawlessly, but it’s what I expected from a $2000 gun. 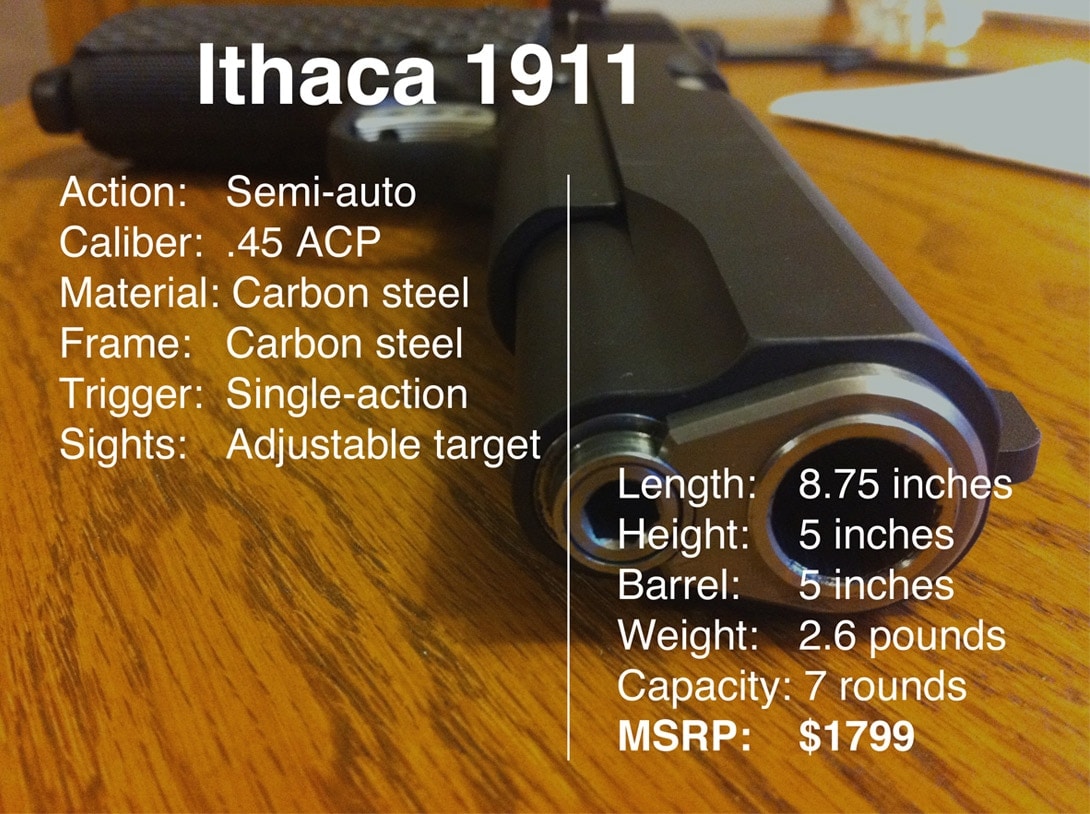 So where can you pick up one of these here Ithacas?  Other than a gun here or there on one of the online auction sites, I haven’t seen them for sale.  I can’t tell you the street price because there doesn’t seem to be one.  There are not too many of these out there right now either.  I suspect the people who have one are holding on to them.  MSRP starts at $1799, but prices vary depending on features (the one under review was priced at $1949, according to the invoice).

So what sets this apart from the others in its range?  The name on the slide.  I don’t mean that in a negative way at all. Almost everyone makes a 1911.  Ithaca is new to this market; the review gun’s serial number is in the 400s. Very few people have a new Ithaca 1911.  If you are looking for a 1911 in this range the Ithaca would be a great choice for something “different”.