It’s ironic, but the minute I hear someone calling for “reasonable dialogue” or “sensible politics,” I know that all reason and common sense has left the building and instead what I am about to hear is a load of claptrap soon to be followed by a bunch of knee-jerk responses.

This is essentially what’s going on in the wake of the Sandy Hook Elementary School shooting that left 28 dead, including 20 school children, seven women and the gunman.

Pro-gun lawmakers, corporations, television networks are all panicking.  Everyone, it seems, is willing to throw rationality out the window along with their core convictions to conform to a post-Sandy Hook political ethos that is hyper-critical of gun culture.

If that description seems a little abstract, here are some concrete examples of what’s going on out there:

Some of us truly believe that it’s not a gun problem we have in the U.S., but a people problem.  Others claim to believe this for political reasons but deep down inside believe something else.

Now, I’m not sure where Sen. Joe Manchin of West Virginia currently stands on the issue of guns.  I do know that in the past the conservative Democrat got an “A” rating from the NRA, was endorsed by them for re-election in October and that he prominently featured guns in his political campaign where he claimed to be a “proud gun owner.”

Is this still true?

Given his latest comments, I’m not so sure.

“I don’t know anyone in the sporting or hunting arena that goes out with an assault rifle” said Manchin on MSNBC’s “Morning Joe.”  I don’t know anybody that needs 30 rounds in a clip to go hunting. I mean, these are things that need to be talked about.”

He followed that up with these comments in a press statement on Monday.

“This awful massacre of our youngest children has changed us, and everything should be on the table,” Manchin said. “We need to move beyond dialogue — we need to take a sensible, reasonable approach to the issue of mass violence.”

It stands to reason that Manchin isn’t the only lawmaker reassessing his stance on guns.  This is, for obvious reasons, problematic for the fate of pro-gun community.

Let’s get something straight: the gunman in Connecticut brutally murdered those children.  The weapon he used to carry out that unspeakable act is immaterial.

Yet, certain retailers – like Walmart – believe that Bushmaster, the maker of the .223 caliber rifle the gunman used in the attack, should be punished. 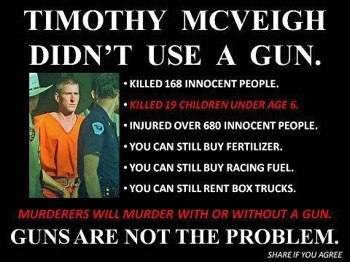 To put this in perspective, this is like the nation’s biggest car dealer pulling Fords off the lot because a deranged lunatic ran into a busload of children while driving a Ford F-350.

We rarely stigmatize inanimate objects (or their manufacturers) when something goes horribly wrong as a result of human malevolence (did we blame racing fuel or fertilizer when McVeigh blew up Alfred P. Murrah Federal Building in Oklahoma City?) – so why in this particular context is WalMart blaming guns and – in the process – punishing Bushmaster?

UPDATE: Add ‘Cheaper than Dirt!’ to this list as well:

Cheaper Than Dirt! is suspending online sales of firearms effective immediately. We are reviewing our policy internally, and will continue to be the leader in the outdoor industry with our full line of gear and accessories.

Discovery Channel’s popular reality show about a family of gun makers, “American Guns,” came under intense scrutiny in the wake of Friday’s mass shooting at a Connecticut grade school, with people flooding the show’s Facebook page calling for its cancelation.

A Discovery rep told FOX411  that “American Guns” – which is out of production and not currently broadcasting new episodes – has been canceled and will not return for a third season. This comes as something of a surprise given its growing popularity. The show had a 50 percent ratings increase for its second season premiere, and one of its stars, Renee Wyatt, recently said she would “definitely” be interested in returning for season three. The rep, however, would not link the show’s cancelation to the Connecticut school massacre.

The thinking here seems to be, “Let’s remove all traces of responsible gun ownership from public airwaves to further perpetuate the myth that guns and gun owners are a menacing threat to society.”

This doesn’t make any logical sense.

The NRA has been conspicuously silent over the past few days.  They’ve declined to give any comment to the media (including Guns.com).

Meanwhile, hundreds of pro-gun control advocates are marching in front of their headquarters on Capitol Hill.

The nation’s most powerful gun lobby has not responded.

I get that NRA leadership wants to know all the facts of the Sandy Hook tragedy before they issue an official comment, but still, gun owners need them now more than ever.

Our way of life is under attack here.

We need leadership, we need measured action, we need a united voice to oppose the draconian gun control legislation that’s coming down the pike.

Now is the time to fight back, now is not the time to be cowed by political correctness… where is the NRA?

From the NY Times:

The investment firm Cerberus Capital Management announced Tuesday that it would sell its stake in the country’s largest gunmaker after one of the company’s guns was used in the Connecticut school shootings.

Cerberus said that it was putting the company, Freedom Group, up for sale just hours after one of its largest investors, the California teachers’ pension fund, said it was reviewing its relationship with the firm. Also late Monday, the California treasurer raised concerns about the state’s pension funds’ investments in gun companies.

“The debate essentially focuses on the balance between public safety and the scope of the Constitutional rights under the Second Amendment,” Cerberus said. “As a firm, we are investors, not statements or policy makers.” The statement added: “It is not our role to take positions, or attempt to shape or influence the gun control policy debate. That is the job of our federal and state legislators.”

Guns.com examined this decision in an in-depth article, click here to read.

If you’re wondering why everyone is panicking, well, all you really need to do is pick up a newspaper or magazine or visit a mainstream website.

The media has collectively thrown gun owners under the bus.  The consensus appears to be that we are to blame for the murder of those 20 children.

The people who fight and lobby and legislate to make guns regularly available are complicit in the murder of those children. They have made a clear moral choice: that the comfort and emotional reassurance they take from the possession of guns, placed in the balance even against the routine murder of innocent children, is of supreme value. Whatever satisfaction gun owners take from their guns—we know for certain that there is no prudential value in them—is more important than children’s lives. Give them credit: life is making moral choices, and that’s a moral choice, clearly made.

What’s sad in reading Mr. Gopnik’s comments is that I don’t know one gun owner who wouldn’t have willfully laid down his or her life to save those children.  Not one.  While I may be speaking anecdotally, I’m sure that this is – by and large – true.

What pro-gun control advocates don’t recognize is that carrying a firearm for self-defense is a lot like knowing CPR.  That is, in exigent circumstances, when stuff goes bad, it’s better to have that training, that skill set, that tool and not need it, than to really need it and not have it.

In many ways gun owners are the de facto stewards of public safety.  When seconds count and the police are minutes away, if we’re there, we are ready and we are willing to put our life on the line to save others.

My mindset and my resolve do not change in the aftermath of a national tragedy.  On the contrary, I am more committed than ever before to being a defender of freedom and a way of life that is uniquely American.