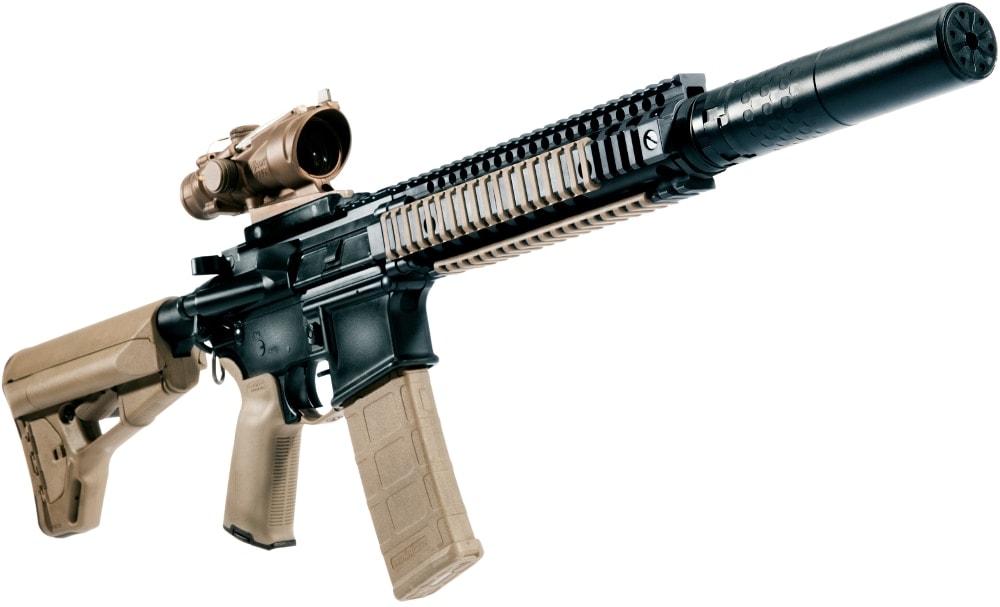 Silencerco just told us that they’re about to launch the Saker, one of, if not the most innovative silencer to hit the market. The wait is almost over and expect to see them in stores soon.

The Saker has three key features that make it stand apart from the crowd. First is its Multiple Accessory Attachment Device (MAAD) mount, which is a modular mounting system that screws into the rear of the can. This mount supports any number of adapters to make the Saker attach to whatever muzzle device you have, as opposed to just Silencerco muzzle devices.

Of course, they do have their own in-house mount that works with their new Trifecta flash hider, a new type of pronged flash hider that is tuned, or rather, untuned, to prevent flash hider ringing. Each prong is a different length which counteracts the harmonic effect of having matched-length flash hider prongs.

The Trifecta mount also uses an internal quick-detach ratcheting system that allows the Saker to be installed under a handguard; it doesn’t have levers or other external locking devices.

They will also launch with a 51T mount for Advanced Armament Corp. muzzle devices and a 1/2-28 thread adapter for mounting it directly to the barrel of your rifle. Silencerco has plans for future adapters for other common muzzle devices.

The MAAD mount is accompanied by the MAAD Cap on the other end of the silencer. The muzzle side of the suppressor is threaded for interchangeable end caps. The most common type of suppressor failure is cause by an end cap strike. With the MAAD Cap, if this occurs, the end cap can easily be replaced with a new one—it doesn’t need to be sent back to the factory for repair.

This also means that it can accept other types of end caps. Silencerco already has one for the Saker that has an integrated flash hider, which can be necessary when running a rifle with a short barrel or when shooting a large volume of fire; there is still enough heat and fuel exiting the suppressor to cause muzzle flash. Other end cap designs are possible—even custom caps.

The final major change is a new material for their blast baffle and baffle stack that has especially resilient properties, specifically when stressed and heated. The blast baffle has been reversed and reshaped to cut down wear as well; Silencerco tested the new blast baffle with weaker materials and the new design by itself proved to be less susceptible to deterioration over time.

It’s been about a year since Silencerco announced the Saker. The waiting’s been hard.

This is one cool silencer, and designed as it is to last, with its modular mounts that mean continued compatibility with future muzzle devices, it may become one of the most popular 5.56 suppressors on the market. Plus, with an MSRP of $1,200, it is extremely competitive with other highly-featured, overbuilt suppressors. In other good NFA-related news, the DOJ has lifted their hiring freeze for ATF examiners, and they have expanded their staff by nearly 50 percent. This is expected to continue the downward trend in Form 1 and 4 wait times.

For more info, check out the Saker product page and NFATCA and NFATracker.com.