Dear Santa: For Christmas I want a Ruger Super Blackhawk (the one from Lipsey's)

I want a new revolver for Christmas this year. To be specific, I want a Ruger Super Blackhawk, but not just any Blackhawk.  The fine folks at Lipsey’s have a distributor exclusive that is exactly what I want. I know your elves make a lot of toys but I don’t know if you have the correct documentation and licenses in order for gun making.  I’m sure Lipsey’s will ship it to my local gun shop.  Actually I will even pick it up so you don’t even have to get your suit all covered in soot from my chimney.

The Lipsey’s Exclusive Ruger Bisley .44 Magnum revolver was released in 2012. It has a large frame, a non-fluted cylinder, single-action trigger, adjustable sights, and black laminated grips.

The one I want one is chambered in .44 Magnum and has a 3.75 inch barrel.  The MSRP is only $784, but I’m sure they’ll give you, Santa, a discount. I intend to use it to hunt, but don’t worry Rudolf we don’t have a reindeer season in Arkansas.  The stainless version would surely hold up better against the elements out in the field. You know how that is Santa.  The Blackhawk from Lipsey’s also has a Bisley grip frame.  Some people like the Bisley grip and others don’t, but I happen to love the way it fits my hands. And this is my Christmas present. The angle on the grip really makes the recoil from the .44 magnum manageable.  I have found it to give more of a push back and less muzzle flip than the standard grip frame.

I have a thing for big bore revolvers.  I know there are more powerful rounds than the .44 Magnum, but this is ideal for what I will use it for — a back up piece for hunting.  You might want one too.  I know you are probably too busy with Christmas preparations to go hunting, but if you have any trouble with polar bears trying to get in the reindeer pens it could come in handy.  Or if that Grinch guy comes around again… Or a Yeti.  Even the Abominable Snowman would run scared from 240 grains of lead moving at 1,500 feet per second. 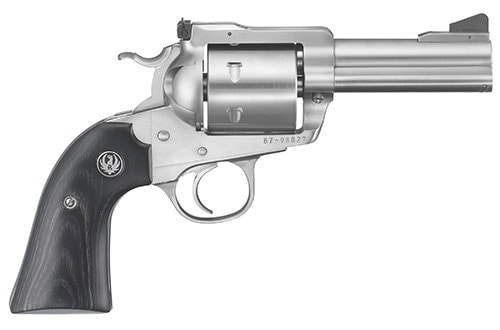 Many think that Santa, because of his theatrical ways, carries a Smith & Wesson Model 29, but that’s not true he usually has a Ruger Blackhawk tucked away.

Santa, you might be curious about why I ask for one with such a short barrel.  At first, I too wondered how the balance would be with the 3.75 inches of shiny steel.  But my reason is it balances really well!  I think most of that is because of the Bisley grip frame.  Yes, it would be easier to hit targets farther away with a longer barrel, but I don’t want a 10-inch target pistol.  I want a light – well it is a .44 Magnum so I don’t want it TOO light – 6-shot revolver. This one weighs in at a little over 2.5 pounds and will fit the bill nicely.

So there you have it Mr. Claus.  The revolver that I want for Christmas.  Really, you should think about picking one up too.  I don’t know if the TSA requires you to have an Air Marshal on your flight but if not it could come in handy.  Oh, you might need to see about getting a concealed carry permit for all of … ok, you can probably skip that.  Just tell the police that you are Santa and if they give you any trouble tell them they will be getting coal in there stockings and not a new Ruger.

P.S. if you are feeling extra generous this year will you please have Bowen Classic Arms do an action job on it?