But let me begin by saying this: no matter how curious you get, ignore that impulse to try this thing out.

Not the flashlight part.  Try that (but don’t look directly into the beam).  You know what I’m talking about.  I stunned myself.  I felt compelled to do so, just to know if the snapping arc would actually be effective.  This is, after-all, a review.  But trust me on this one: don’t try this at home.

So I shocked myself.  Now I know.  It hurts.  The sensation is kind of like a quick burn, and an instantaneous charlie horse, combined with something deeper, like a punch coupled with an awaking of consciousness that says “no” in a loud and quasi-instinctual voice.  It is an effective deterrent. 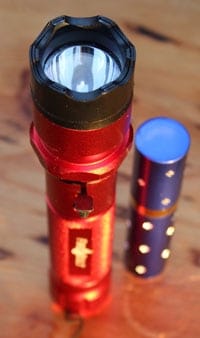 The Fire Bolt and the Stiletto stun gun flashlights.

The physical sensation hurt, but that isn’t the important part.  I stunned myself for only a fraction of a second.  That wasn’t my intent, exactly, but I couldn’t hold it on me; the muscle twitch was involuntary, and broke the connection.  The arc had no problem with my jeans.  And my quad, where I shocked myself, contracted and sent my leg shooting out like a reject Rockette.

And I get the deterrent effect.  I don’t mind pain at all.  I mind the anticipation of pain.  I’ve always been this way.  I won’t shock myself again with this thing because now I know.  That I did it at all is kind of a milestone for me.  I’m that kind of wimp.

After handling these things for a while, I truly understand their potential.  The Fire Bolt is a solid flashlight, and an intimidating deterrent.  It would make a good defensive weapon.

The Stiletto is equally intimidating.  It has a couple of design features to recommend it.  The light is small and has a secure cover.  Both features make it functional.  There are two switches, one for the light and one for the stun feature.  The light can remain on while the stun is activated. 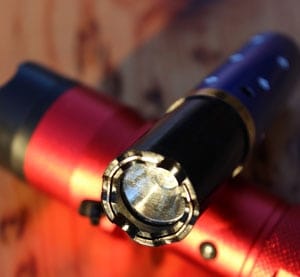 The Stiletto is smaller, but just as convincing.

The Fire Bolt itself is bigger and solid.  There is one design flaw, but it is small: the o-ring that holds a cap for the charging plug.  It fits into a groove that’s milled into the light just above the switches.  But this ring rolls out of the groove too easily.  But that is it.

The switch works well.  On one side is a simple switch that turns on the light in one position and readies the stun feature if pushed one stop farther.  The button for the stun is on the opposite side, which minimizes the chance of confusion.

If I were to suggest a change to the Stiletto, I would say make a masculine version.  The size is right and the cap is great, but the rhinestones don’t really appeal to me.  But I would be more likely to carry the Stiletto, if only because it truly fits in a pocket. 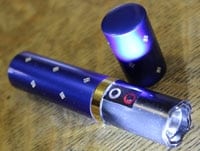 The Fire Bolt kicks like a mule.  And it is incredibly effective as a psychological deterrent.  The sound, and the cold blue arc sends a really clear message.  As far as subtle non-lethal protection goes, the both of these are first rate.  And when you’re not running off miscreants, you have a handy light.