A few weeks ago, I ran an a piece on Technoframes.  This Italian company makes very high-end accoutrements for firearms enthusiasts.  I had seen a gun case of theirs and was impressed, and persuaded them to send Guns.com a couple of ammo cases.

What I’ve seen has impressed me enough that I thought I’d do this follow up.  It is rare to find gear this well designed and made.  Technoframes ammunition cases are nothing more than exquisitely made boxes designed to hold ammunition.  Simple enough.  Yet they are also fine examples of craftsmanship.  But the sticker shock on one of these might get the better of you.  Don’t let it.

For example, the Zero 22 holds 100 rounds of .22LR.  It is just a fancy box.  But with a retail price of $79, you really have to be dedicated to the idea of a fancy box for your .22LR, one of the least fancy rounds available. 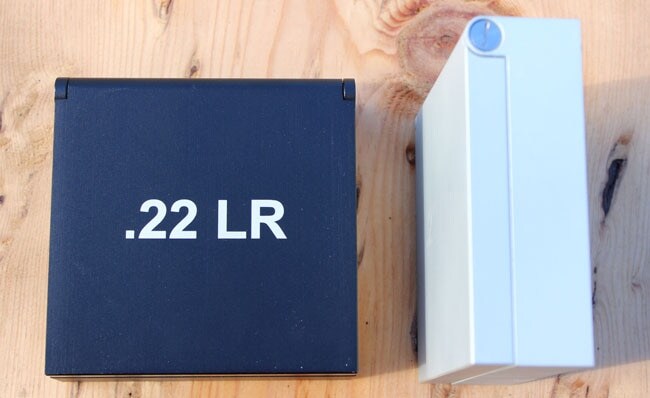 But it isn’t simply a box.  It is milled from a block of aluminum.  The hinges are silent and tight.  The box latches shut with magnetic closures that hold it secure. Inside, the rounds are held securely.  They are available in a silver tone, or black. 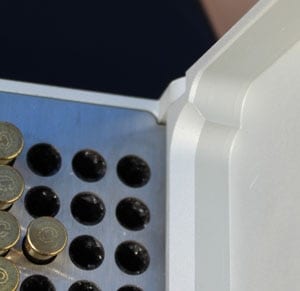 The inside of the Zero 22 lid.

While the box could fit in a pocket, and it is certainly sturdy enough to drop into a range bag, I’d be much more likely to keep it sitting on my desk.  It has that pleasing feel of a well made box.  The lid closes with a crisp snap.  And it is just heavy enough to have a bit of presence.

I find the lines on this box almost as pleasing as I do the lines on a classic Colt auto.  The milling is done so precisely that the lip in the inside of the box rim just barely clears the rim of a .22LR.  The fit could not be better.  And the milling is clean with no glaring tool marks.

The $79 doesn’t seem so high when you consider that the box will outlast you and become an heirloom of sorts.

The Zero is just as pleasing to the eye, and as well made.  These larger boxes come in multiple calibers and several internal layouts.  This one is built to holds 50 9mm rounds, and it is lockable.

While this would also make a nice set-about for a desk (in a trustworthy sort of setting), I think I’d be much more likely to take this one with me.  I often travel with a gun, and airline regulations stipulate that ammunition must be stored separately from a gun, and most prefer that it is in a locked box.

Because I had the Zero case, I’m flying with my 9mm PX4.  The gun is in a simple, but bomb-proof Lockdown gun case.  With the PX4 secured in the Lockdown, and the ammunition in the Technoframes Zero, everything is compact and secure. 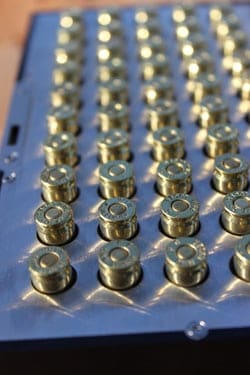 Every year around this time, my attention turns to giving gifts.  It is difficult to make them meaningful. And I always come across things I’d really like for myself.  The problem is that no one who would be likely to give me a gift would ever be able to guess what I want.  And if I told them, the explanation of why would get so complicated.

Yes, it is just a fancy box.  And it is likely to be the first thing I buy for myself after all of the gift giving ends.