Overall, both spokesmen did a solid job defending gun rights and the National School Shield Emergency Response Program (the armed guards in schools plan) in the face of some pretty tough questions.  Though, if we’re splitting hairs, Keene was slightly more composed and articulate in his responses.

One highlight from Keene’s interview was when he was asked about the number of rounds a semiautomatic weapon can fire in five seconds, he said, “Well, they fire when you pull the trigger… they don’t keep firing. That’s a fully automatic weapon.”

As all gun owners know, this is where much of the confusion exists in the debate over gun control.  Due to the media’s inability or unwillingness to differentiate between commonly owned sporting rifles (semiautomatics) and military grade arms (fully automatic weapons) the non-gun owning public often believes that a civilian owned AR-15 is an ‘assault’ weapon capable of spraying thousands of rounds in a matter of minutes.

Keene did a nice job of debunking that myth in a succinct and coherent way.  Of course, there’s always room for improvement.  He should have hammered home that (a) according to government studies, the Clinton-era ban had a statistically insignificant effect on crime rates and (b) violent crime, property crime and the homicide rate have all continued to decline since the ban expired in 2004 (additional proof that the ban was insignificant).

Keene briefly touched on those facts, but he did not delve into detail as much as he should have.

Two more additional points he sort of flubbed (a) Schieffer claimed that more people are getting shot each year in the U.S., that gun violence is on the rise, this is completely specious and based off of unreliable reporting from hospital trauma centers around the country and (b) the notion that industrialized nations with high rates of gun ownership have higher rates of gun-related violence.  If this is universally true, how does one explain Switzerland, which has the fourth highest gun ownership rate in the world and a very low intentional homicide rate?

To turn to LaPierre, he had to address many of the same questions that Keene did.  He also flubbed a few responses, i.e. either didn’t go into enough detail or failed to mention an obvious point.

Take, for example, the high-capacity magazine issue, for the life of me, I don’t why he didn’t explain how quickly someone familiar with firearms can change a magazine (under 5 seconds, conservatively) or the fact that larger magazines are prone to jamming or the fact that many of these shooters carry multiple firearms (which means, even with regular magazines they can continue to shoot without reloading) or the fact that there are so many high-capacity magazines in circulation that they will be available in perpetuity (especially on the Internet or black market if they’re eventually banned).

I’m probably being a little too critical, but I think it’s vitally important that we continue to refine our message to make it as explicit and as clear as possible.

One question LaPierre had to address that Keene did not, was the issue of – well – sanity.  That is, the mainstream media views Wayne LaPierre as a “Gun Nut” and his plan of putting armed guards in schools as equally loony.  LaPierre did a quality job of responding to this accusation.

“If it’s crazy to call for armed officers in our schools to protect our children, then call me crazy,” LaPierre said. “I think the American people think it’s crazy not to do it. It’s the one thing that would keep people safe.”

LaPierre’s not crazy.  Sure, he’s a little bizarre in some respects (rhetorically speaking he’s a little odd, all the talk of ‘good guys’ and ‘bad guys’ and ‘monsters’ and some other tics that he has), but who isn’t?

More to the point, he’s right.  According to Gallup polling, at least half of America believes that placing police officers in schools (or presumably armed guards) would be “very effective” at preventing mass shootings. 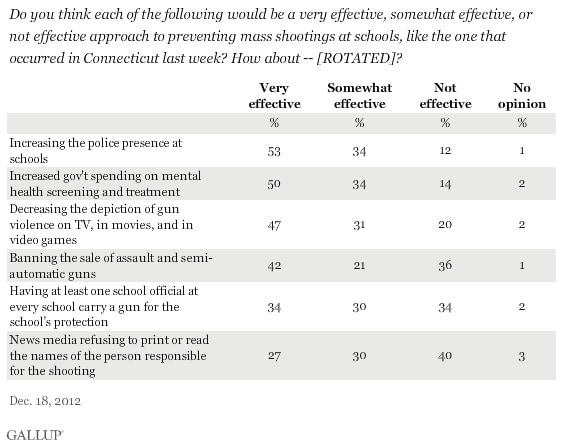 Bottom line, if LaPierre’s crazy, so is more than half of America.  Something the mainstream media should consider before it continues to bash the NRA and dismiss its  National School Shield Emergency Response Program.