I’m laying out dozens upon dozens of extra cookies and milk this year because, well, I’m shooting for the stars.  Santa, what I want is kind of expensive. I’d like Ernest Hemingway’s Westley Richards .577 Nitro Express double barrel rifle.  While the caliber isn’t much fun to shoot unless you favor bruised shoulders and unplanned root canals, but it’s sure to deliver a smile as wide as the African plains.

The engraving on Hemingway’s double rifle includes this rhino, a tiger on the trigger guard and scroll work in between.

Most people ask, why a double?  I think why not? Aside from the fact that they’re expensive, short of range, and impractical for a Midwestern hunter, but how many firearm aficionados actually get a chance to shoot, much less own, one of these quality two-shooters?  Since I will likely never buy a quality double rifle for myself due solely to price, I will always have a place for one in my arsenal. Are you hearing me Santa?

Doubles are finely tuned machines as well as gorgeous works of art.  Most doubles have engraving fit for a museum and equal quality wood.  Reminiscent not only of Hemingway, doubles spark romantic memories of Teddy Roosevelt, Denys Finch Hatton, Philip Percival, Harry Selby and the many professional hunters who popularized African safaris. Holding those historic doubles brings heart pounding tales of charging dangerous game, stalking the lions of Tsavo, or accompanying Papa Doc on safari—adventures the likes of which are now mostly relived through literature.  That’s why when you ask me what I want this year—and since I’ve been pretty good—I’m not asking for any old double, but one of patina, provenance and history.

The Westley Richards .577 Nitro Express accompanied Hemingway in the early 1950’s, during which time he both popularized and brought to life through his writings the thrill and danger of hunting the big five.  As if that’s not enough reason to want the rifle, its storied history goes beyond safari.

During World War II, Hemingway answered the U.S. Navy’s call to patrol the water off Cuba and Florida for German U-boat invasions and outfitted his fishing boat Pilar for the task.  Not only was the boat equipped with light machine guns and grenades, but also his personal arsenal, which included the Westley Richards .577.

However, the gun’s own story began well before Hemingway acquired it, as factory records included with the sale indicate the rifle was built in 1913 for British Cavalry Officer S.H. Christy, who died in France less than a year after his commissioned rifle was finished (Also, Santa, if any of this sparks an interest check out “Hemingway’s Guns” by Silvio Calabi. There’s a chapter dedicated to the .577 Westley Richards).  Adding to the gun’s allure is the fact that manufacturer Westley Richards is one of the oldest surviving English gun manufacturers.

I know, I know. My wish trumps plain common sense because a .577 Nitro Express chambering is too darn big for me. And the answer is “Yes,” I do subscribe to Robert Ruark’s saying “Use enough gun,” but I guarantee I would never need more gun than a droplock double in .577 NE.

Santa, you and your elves may have to fire up your cash printers (I know you have them in the North Pole) because it isn’t gonna be cheap. In 2011 the rifle’s current owner dropped nearly $340,000 after buyers fees at a James Julia auction to acquire the piece.  Remove this gun’s ties to Mr. Hemingway and it would likely sell closer to $75,000 to $100,000. 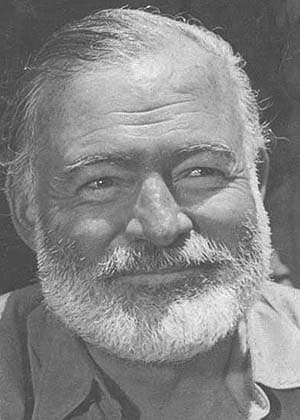 All we have to do is mention “Santa” and you see it. The resemblance is uncanny.

While Hemingway’s Westley Richards is neither practical nor affordable, it sure would be fun to carry on a cape buffalo safari or even a close-range big-game hunt in the states.  In close quarters, heavy cover, life-and-death hunting situations, a classic double is darn hard to beat.  Avid readers of Hemingway books like “The Green Hills of Africa” know of his affinity for firearms that are both fine and useful.  And I’d also like to point out that you and Hemingway bear a striking resemblance to one another. Coincidence?  Perhaps, but I think the stars are aligning for my Christmas wish list.

On the not-so-outside chance that you cannot wrangle Mr. Hemingway’s particular double away from its current owner, I want to be clear that I’d be willing to accept most any other double rifle.  In fact—provenance aside—a smaller caliber would actually suit me much better.  I’m particularly fond of Holland and Holland doubles in the .375 chambering.  The double triggers and master engraving are a plus. A Merkel or Purdey would do just fine as well.

So Santa Baby, if you haven’t tuned me out yet, I hope you will shimmy down my chimney with that classic double.  While the mood is right, lets plan a safari, plop on a pith helmet and make those two beautiful barrels smoke.