In the wake of the elementary school shooting in Newtown, Connecticut, a New York-based newspaper published the names and addresses of local gun owners in surrounding areas on interactive maps for the world to see.

The decision to disclose this sensitive information – which is part of the public record – created quite the controversy.  Some supported the paper’s initiative, while others clearly did not.

“I would love to know if someone next to me had guns. It makes me safer to know so I can deal with that,” John Thompson, a gun control advocate who provides youth counseling on gun violence, told the Journal News. “I might not choose to live there.”

As mentioned, others were less keen on the idea.

“Do you fools realize that you also made a map for criminals to use to find homes to rob that have no guns in them to protect themselves? What a bunch of liberal boobs you all are,” one critic wrote on the newspaper’s website.

Local officials also weighed in on the matter, expressing concern for the civil servants who are on the map.

“You have judges, policemen, retired policemen, FBI agents — they have permits. Once you allow the public to see where they live, that puts them in harm’s way,” Paul Piperato, the Rockland county clerk, told Journal News.

Though words of protest and disgust were not enough for attorney and blogger Christopher Fountain, who decided to get even with the staff at The Journal News by publishing their addresses and phone numbers on his blog.

In an interview with CNN, Fountain explained his decision to fight back in the matter that he did.

“Somehow, [The Journal News was] conflating legal gun owners with some crazed, tormented devil up in Newtown and putting the two together,” he said. “And I was offended by that and I wondered how they’d like it if their addresses were published.”

Fountain echoed the complaint made by many that the maps are a risk to public safety.

“I’ve received emails from abused women who were under protective order and in hiding, and they’re terribly afraid that now their names and addresses are all over the Internet and accessible through that map,” Fountain explained. 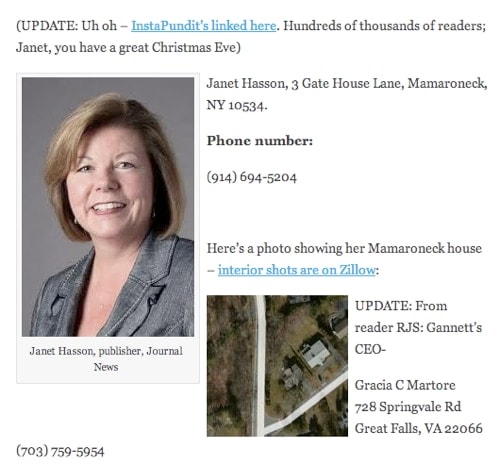