A new Poll conducted by Gallup shows that 51 percent of Americans oppose a ban on semiautomatic firearms known as ‘assault’ rifles, proving that those who wish to renew a Clinton-era Assault Weapons Ban have a tough hill to climb.

By contrast, only 44 percent favor an outright ban on ‘assault weapons,’ a slight but statistically insignificant jump from the 42 percent that supported the ban in the last Gallup poll conducted on Dec. 18. 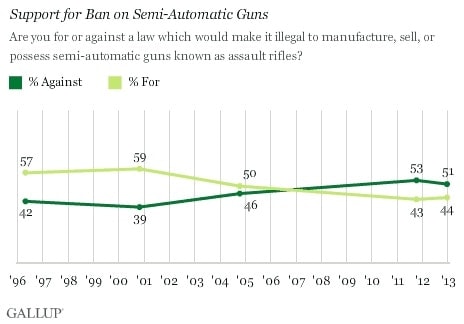 In other good news for gun owners, a record-high 74 percent of poll participants oppose a ban on handguns, or as the poll stated, oppose preventing anyone but the police or other authorized officials from owning a handgun. 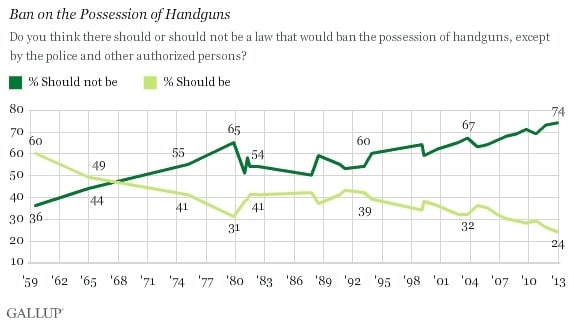 Though, it wasn’t all good news.  The poll also showed momentum building for overall tougher gun laws, including two particular measures: universal background checks and a ban on high-capacity magazines.

According to the poll, 58 percent of those surveyed believe in strengthening laws covering the sale of firearms, which is up from 43 percent in 2011. 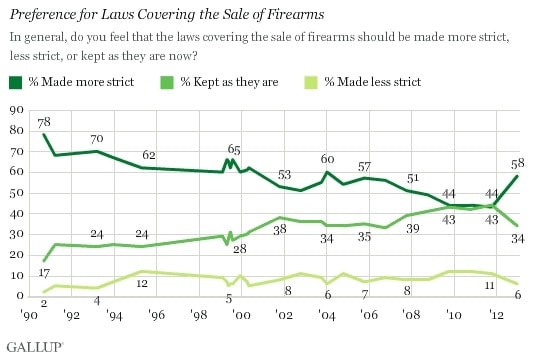 With respect to the specific issue of the inaptly named ‘gun show loophole,’ 92 percent favored closing this putative loophole (It’s unclear, based on the funky wording of the Gallup poll, whether or not Gallup knows precisely what the ‘gun show loophole’ refers to, i.e. sales that occur between private citizens.  Under current federal law, all FFLs have to be licensed with the ATF and conduct background checks before making a sale to any citizen).

On the issue of high capacity magazines, which are generally defined as feeding devices that hold more than 10 rounds, 62 percent of the public favor banning those next to the 35 percent who oppose banning the popular accessory.

Both the National Rifle Association and the Brady Campaign to Prevent Gun Violence weighed in on the new poll results.

Given all the recent anti-gun hysteria in the mainstream media following the elementary school shooting in Newtown, Connecticut, NRA President David Keene was surprised that the polls didn’t reflect more general support for gun control.

He noted, however, one of the literal fallacies concerning the ‘gun show loophole,’ that is, only one percent of inmates surveyed by the Justice Department said that they were carrying firearms purchased at gun shows when they committed their crimes (though, as mentioned, the ‘gun show loophole’ really refers to sales between private citizens, which are not subject to background checks).

“It would make sense to do something if it was a problem,” Keene said. “When you get into the question of the so-called gun loophole and Congress asks, ‘What is this going to solve?’ Then it’s a whole different kind of deal.”

Brady Campaign President Dan Gross responded to the lack of support for the renewal of the Assault Weapons Ban.

“That’s an example of where the gun lobby’s narrative has taken root and needs to be overcome,” Gross said. “If the poll is accurate, it shows we have a little work to do on that one.”

Or, perhaps, it could be that by and large Americans understand the inefficacy of the previous AWB — or that most Americans just love guns.  Whatever the reason may be, let’s not rest on our laurels.

Gun owners have a lot of work to do in 2013.  We need to continue to educate, educate, educate the non-gun owning public whenever possible.  Got a friend who doesn’t shoot?  Take him/her to the range.  Got a friend who favors gun control?  Have a friendly debate about why gun control is ineffective.  Have some extra cash on hand?  Donate to the NRA, Second Amendment Foundation or your favorite pro-gun organization.

If 2013 is to be a good year then we need to do a stellar job winning over hearts and minds.