For one of their first “New for 2013” product announcements, Advanced Technology International is showing off a new set of stylized, heavily-featured accessories for the Benelli M4. Called Raven, they are designed to help deal with the recoil of full-house 12-gauge loads, add functions to the stock M4, and to look mean.

The stock has all the features you expect in a premium aftermarket shotgun buttstock. It telescopes and has an adjustable cheekrest, and is very sturdily constructed. It’s 6061 T6 aluminum overmolded with rubberized polymer for comfort. It’s built on a tube like an AR stock, which is fairly common, and has an adjustable friction tension mechanism to increase drag and reduce wobble. 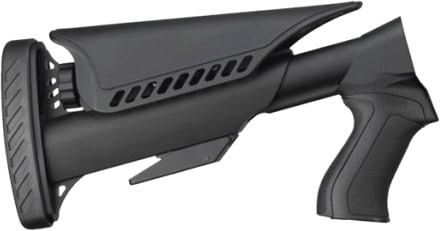 “The Raven goes far beyond just being the first adjustable six position stock for a semi-automatic shotgun,” said Jon Shaffer, Director of Business Development. “The infinitely adjustable cheekrest and the buffer tube tension mechanism… are just the beginning of new innovations that ATI will bring to the gun accessories market.”

It has a pistol grip for manuverability, and the pistol grip is inset with recoil absorbing material to reduce the felt recoil trasfered into the web of your hand, the most common gripe about shotguns set up like this. The stock also has a reversible sling loop that rides flush with the receiver when not deployed.

The forend isn’t just for looks, either, In addition to having the same polymer-over-aluminum construction as the buttstock, with an enlarged, padded palmswell, the forend has two extensions, the first being a barrel shroud. The shroud mounts to the handguard, meaning it has no contact with the barrel whatsoever, preventing direct heat transfer between them. The forend also has a forward Picatinny tri-rail that envelops the magazine tube for mounting accessories. The ATI Raven will be offered in two versions, the buttstock by itself and the buttstock with a matching forend.

Currently ATI is taking pre-orders for the stock and stock and forend combo. We have a couple of reservations about this as they have not stated an expected delivery date, and 2013 is a bit on the vague side. And the other is what the stock and combo are pre-ordering for. The stock alone is priced at $375 and the full set $625. They’re not hooking up pre-orderers with discounts, either.

Still, M4 owners are used to paying a little more for their hardware, and if the build and material quality insinuated by this new furniture set is more or less as described, it may be worth every penny. Not that we don’t trust ATI’s abilities, but this is a new class of accessory for them.

And we applaud it. We’ll definitely run our hands over this stock set as soon as possible, presumably at this upcoming SHOT Show.

The M4 is a truly modern combat shotgun, developed for the Army and in widespread service with the US military and other agencies world ’round. This looks like it will compliment it nicely.

For more ATI goodness, check out their Facebook page.