To highlight the inequity in the DC legal system, Miller pointed to two different cases, one involving an Iraq and Afghanistan war veteran Adam Meckler and another involving NBC’s ‘Meet the Press’ host David Gregory.

Both men violated a subsection of this onerous gun law, DC Criminal Code 7-2506.01:

Unlawful Possession of Ammunition (UA): It is illegal to possess ammunition in the District of Columbia unless the person is:  (1) a licensed dealer, (2) a federal or city law enforcement officer acting within scope of duties, or (3) holder of a valid registration certificate of same gauge and caliber as ammunition in possession.  It is also illegal to possess, sell or transfer any ‘large-capacity ammunition feeding device.’

A person guilty of this charge can be sentenced to a maximum fine of $1000 and/or up to a year imprisonment.

In 2011, Army Spc. Adam Meckler, who spent 15 months in Iraq and 15-month in Afghanistan during his 9 year military career, was thrown in jail for being in possession of ‘unregistered ammunition.’

Meckler was arrested at a District VFW office building.  He was there dropping off his medical records and was unaware that he had some loose rounds of 9mm ammo at the bottom of his backpack (he had no gun with him).   As he walked through the security checkpoint, the rounds set off the metal detector.

Meckler was cuffed and then subsequently jailed.  Not having enough time or money to fight the charges in court, he was forced to accept a plea deal.  He now has a criminal record and was added to a database of gun-crime offenders.

On Dec. 23, in an interview with NRA Executive Vice President Wayne LaPierre, David Gregory held up a 30 round magazine to make a fallible argument about the increased lethality of high capacity magazines (see video below).

In doing so, Gregory was in clear violation of the DC law (the ‘Meet the Press’ studio falls within District borders).  Was Gregory arrested or thrown in jail following the broadcast?  Nope.

DC Police said they are investigating the incident but have yet to file any charges.  Miller reached out to a spokesperson for Metropolitan Police Chief Cathy L. Lainer on Monday to see if Mr. Gregory had at least been interviewed; the spokesman refused to comment on the situation.

Aside from the way they were prosecuted (one was, the other wasn’t), there’s another element to this story that differentiates the two men.  In Meckler’s case, he had completely forgotten that the rounds were in his bag.  It was an honest mistake.  In Gregory’s case, however, his staff knew that it was against the law to possess a 30 round magazine. 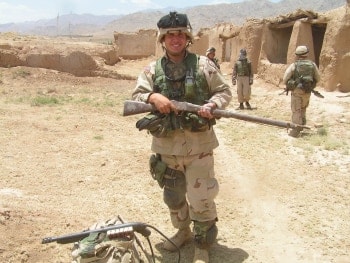 As a matter of fact, Gregory’s staff had asked permission to use the magazine during the segment.  Metro PD explicitly declined the request.  Yet, that didn’t stop Gregory who – it appears – deliberately flouted the law and displayed the magazine while conducting the interview.

Miller asked Meckler what he thought of the situation.

Mr. Meckler, iterated that he would never have intentionally left the rounds in his bag, added, “I think if you had to measure the criminality of the two instances, his should be interpreted as more severe. At the very least, he should be put on probation, pay a fine and be added to the District’s Gun Offender Registry, as I was ordered to do.”