The Remington 783: bolt-action on a budget 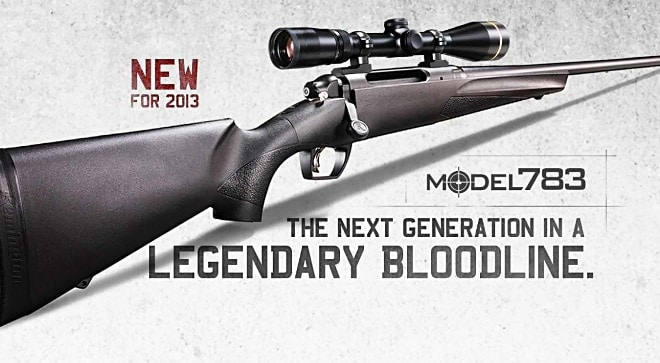 Remington, a company almost synonymous with the working-class, service-quality bolt-action rifle, has developed a bolt gun, the Model 783, for people who are interested in shooting a gun, not spending money on a gun.

The Model 783 sits between Remington’s Model 770 and their bare-bones Model 700s, yet it has the sort of features that you’d expect from premium rifles, including a pillared, bedded action with a free-floating barrel and an adjustable trigger, which can be set between 2.5 and five pounds.

It will be available in four chamberings, .270 and .308 Winchester, .30-06 Springfield and 7mm Remington Magnum. The magnum has a 24-inch barrel while the others measure in at 22. All models weigh between 7.25 and 7.5 pounds, which is a comfortable balance between recoil-mitigation and being just plain heavy. They also all use the same “Magnum profile” barrels, even for the non-magnums.

Shooting Illustrated got some hands-on time with Remington’s upcoming rifle and had a few nice things to say about it.

“I’ve sighted in enough rifles to know those that are not consistently capable of shooting sub two-inch, five-shot groups at 100 yards can become a nightmare. We did not have that problem. We zeroed four rifles with only one box of ammunition.

“After that I got behind one of the 783s and fired six shots using the same point of aim. The first shot struck a bit high and I’ll blame that one on first shot unfamiliarity. The next five printed a nice 1-inch group with Remington Premier ammunition loaded with Swift A-Frames bullets. For what it’s worth, I’ve never had a lot of luck getting Swift bullets to print sub-inch groups in any rifle.

“Next we backed off to 500 yards and proceeded to whack steel. It was no trouble to clean the course with the 783 from the bench. We even moved out among the cow patties and shot just as well from various field positions.”

From the looks of it, the secret to the 783 is a design that takes advantage of modern manufacturing techniques to cut costs while maintaining a focus on a high degree of accuracy. The 783 isn’t the first of the recent crop of bolt-action rifles to re-think how to make them for less on newer machines. It’s safe to say that this is Remington’s answer to the Ruger American, Savage Axis series and a few others that are considered go-to guns for anyone not looking to spend a whole lot of money.

In addition to having an inexpensive synthetic stock (with an integrated recoil pad) the 783 cuts costs with a new tubular receiver, a simple, dual opposing-lug locking bolt and it uses a barrel nut system. The bolt looks cast or metal injection-molded; done right this is a perfectly acceptable low-cost alternative to milled parts.

Finally, it has a two-piece trigger, a set of sling attachment points and comes drilled and tapped for scope bases, which is a good thing because like many of these recent low-cost rifles, the Model 783 doesn’t come with iron sights.

The end result is a rifle that is really promising. It has an MSRP of $410 and a few online vendors have already started listing them well below $400, closer to $320.

Granted, we’re going to want to spend some time with this gun ourselves before we make any sweeping declarations, and it isn’t as though Remington hasn’t made designed a few, er, questionable rifles in the past, but we can at least hope that Remington’s pulled this one off.

We’ll certainly spend some range time with the Model 783 at SHOT Show (assuming Remington brings them to the party) in addition to spending some quality time with one as soon as possible.

Whether it’s for a first bolt gun, a game-getter on a budget, or another rifle to add to the stable, these low-cost, modern-machined rifles are getting more and more interesting. With any luck, the 783 just made them even more so.