In an attempt to strike while the iron is still lukewarm, lawmakers in both the House and the Senate introduced gun control bills on Thursday, the first day of the new Congress.

Reps. Carolyn McCarthy (D-NY) and Diana DeGette (D-CO) re-filed a bill that would ban high capacity magazines, those that carry more than 10 rounds.

“These devices are used to kill as many people as possible in the shortest amount of time possible, and we owe it to innocent Americans everywhere to keep them out of the hands of dangerous people,” McCarthy told USA Today.

Rep. DeGette referenced the high-profile mass shootings at Sandy Hook Elementary School in Newtown, CT, and at a movie theater in Aurora, CO, as the impetus for her renewed efforts.

“I think it’s really put a lot of people over the edge,” DeGette said. “Now is the time to take a tough, principled look at what we need to do.”

McCarthy and DeGette also reintroduced a bill – the ‘Stop Online Ammunition Sales Act’ – that would ban the sale of online ammunition via four components:

· It requires anyone selling ammunition to be a licensed dealer.

· It requires ammunition buyers who are not licensed dealers to present photo identification at the time of purchase, effectively banning the online or mail order purchase of ammo by regular civilians.

· It requires licensed ammunition dealers to maintain records of the sale of ammunition.

· It requires licensed ammunition dealers to report the sale of more than 1,000 rounds of ammunition to an unlicensed person within any five consecutive business days.

In the Senate, seasoned pro-gun control advocate Sen. Charles Schumer (D-NY) reintroduced the ‘Fix Gun Checks Act,’ a bill that would establish universal background checks for all gun sales, including those made between private buyers and sellers.

The queen bee of gun control Sen. Dianne Feinstein (D-CA) did not introduce her updated 2013 ‘Assault Weapons Ban’ on Thursday, but it’s definitely coming in the very near future.  There’s no indication on why it was delayed (during her media blitz following Sandy Hook, she vowed repeatedly to introduce the AWB on the first day of the new Congress).

There’s no doubt that every single one of the aforementioned bills faces and uphill battle.  Gun owners, along with gun rights organizations – the NRA, the SAF, the NSSF, etc. – are already getting the word out about the overall ineffectiveness of gun control.

Moreover, there are indications that the non-gun owning public and the media have a very short attention span when it comes to increased gun regulation.  That is to say, support for tougher gun laws may be waning around the country.

On the day of the Sandy Hook elementary school shooting in Newtown, Conn., we published a chart showing the Sisyphean nature of the national gun control discussion. In the immediate aftermath of a shooting, such as the one that took place in Aurora, Colo., mentions of the term “gun control” spike in the news media. In a matter of days, that discussion all but disappears. 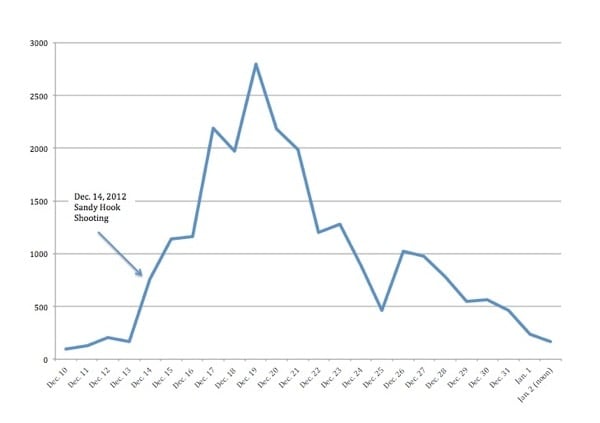 Mentions of ‘Gun Control’ in Media

Lastly, there’s the obstacle that is the Republican-controlled House.  Take, for example, Feinstein’s AWB, even if it gets the 60 votes it needs to pass the Senate, it will still need every single Democratic vote in the House plus 17 Republican votes to pass there.  Thus far, no Republican – in either chamber – has expressed interest in gun control reform.

While all of this certainly doesn’t ensure a victory for gun owners, one can argue that we have the advantage going into 2013.