Chicago has some of the toughest gun laws in the country.  Yet, with 506 murders, it was the murder capital of America in 2012.

So, how do politicians and community leaders propose to cut down on the surging violence in the Windy City?

By doubling down on failed gun control polices.

In the past, Chicago Mayor Rahm Emanuel discussed the need to pass strict gun control measures, including a firearms registry.

“The reason we have gun laws — the reason I’m trying to also pass tougher gun laws down in Springfield — is because it’s an essential complement to your overall crime strategy,” Emanuel said a press conference in June.

“You cannot have just more cops on the street. It’s part of a comprehensive strategy you’ve heard me talk about,” the Mayor continued.  “…Our crime strategy is putting more police on the street and getting kids, guns and drugs off the street.”

And more recently, in a Chicago Sun-Times op-ed, Emanuel talked about the need to usher in new gun laws at a federal level in the wake of the elementary school shooting in Newtown, CT.

Throughout my career I’ve lived by the principle that we should use every crisis to mobilize the public and demand change. This crisis is real — and every day it is tearing apart families and neighborhoods throughout America. These three common-sense reforms [a federal Assault Weapons Ban, universal background checks, and tougher penalties for straw purchasers] are a first step toward ensuring a safer future for our country — a future worthy of the memory of those lost to senseless gun violence everyday.

So, as noted, the answer is more gun control.  But, of course, gun control is wholly ineffective at reducing violence (to reiterate, if onerous gun laws were even marginally effective, Chicago would not lead the nation in murders.  But it does).

So, the question for gun control activists is, how do you square this evident contradiction?

“If this level of gun laws doesn’t work in Chicago, and you still have the guns coming from outside the city in, and now you’ve got 500 homicides this year, what is the argument to extending this nationally and to other cities?” asked CNN’s Don Lemon.

Jackson’s answer was, as one might expect, incomprehensible – bordering on insanity.

“I think about Newtown, for example, they have three or four gun ranges. There are no gun ranges in Chicago,” Jackson said. “Newtown is so different than the complexity of the urban crisis.”

When asked again about the violence in Chicago and the city’s tough stance on gun ownership, Jackson replied:

“The guns are not coming from Chicago. Chicago is in a bubble as the manufacturer — we’re a target market for gun flow. And they exploit the poverty and the pain.”

In other words, he doesn’t have a coherent answer.

The truth is that Chicago – like most major cities – has a gang problem, not a gun problem.  Consider what author and public intellectual Sam Harris had to say in his excellent essay on guns and violence:

Although Adam Lanza [Sandy Hook Elementary gunman] seems to have been the prototypical mass shooter—white, male, mentally unstable, and living outside a large city—the epidemic of gun crime in America is mostly the product of urban gang activity. The black community continues to commit and to suffer more than its fair share of this violence. According to the Children’s Defense Fund, gun deaths among white children and teens have decreased by 44 percent over the past three decades, while deaths among black children and teens increased by 30 percent. Blacks account for only 15 percent of the youth population but suffer 45 percent of all child and teen gun deaths. Black males aged 15 to 19 are eight times as likely as their white peers, and two-and-a-half-times as likely as Hispanics, to die by a bullet.

The point is any effort to curtail violence should start with a close examination of those places and those people who are affected by it the most.  Instead of pushing widespread gun control as the panacea for violence, politicians should start coming up with programs and initiatives that help struggling inner city families and those who are at risk of being pulled into the drug game (see video below for some excellent analysis).

Another factor that plays into the high murder rate in Chicago is the quality of police work.  According to a recent report by DNAinfo.com, Chicago police solved just 129 of those 506 murders in 2012, a 25 percent clearance that is the lowest in 21 years.

While some blame the “no snitch” code of the criminal element, Michael Shields the president of the Chicago police union said diminished manpower in the detective division is the main reason for the poor clearance rate.

“We’re down well over 300 detectives, and that plays a huge role in clearing murders,” Shields said. “The challenge is when there’s very little manpower, you’re working a case, and the next thing you know you’re being handed another homicide because no one is available. So you have to stop what you’re doing and go to the next one. That allows for very little investigating time.” 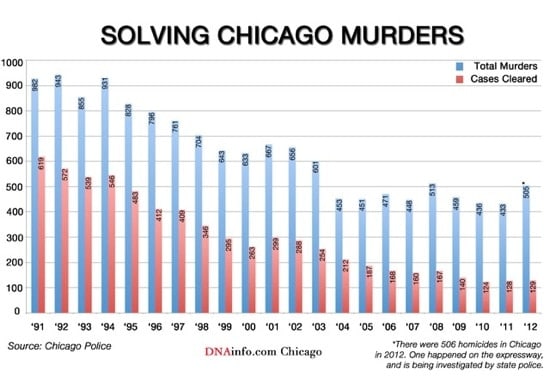 So, one last question, if the definition of insanity is doing the same thing over and over again and expecting different results, what should we conclude about those city leaders who are pushing for more gun control in lieu of targeting the real sources of violence?